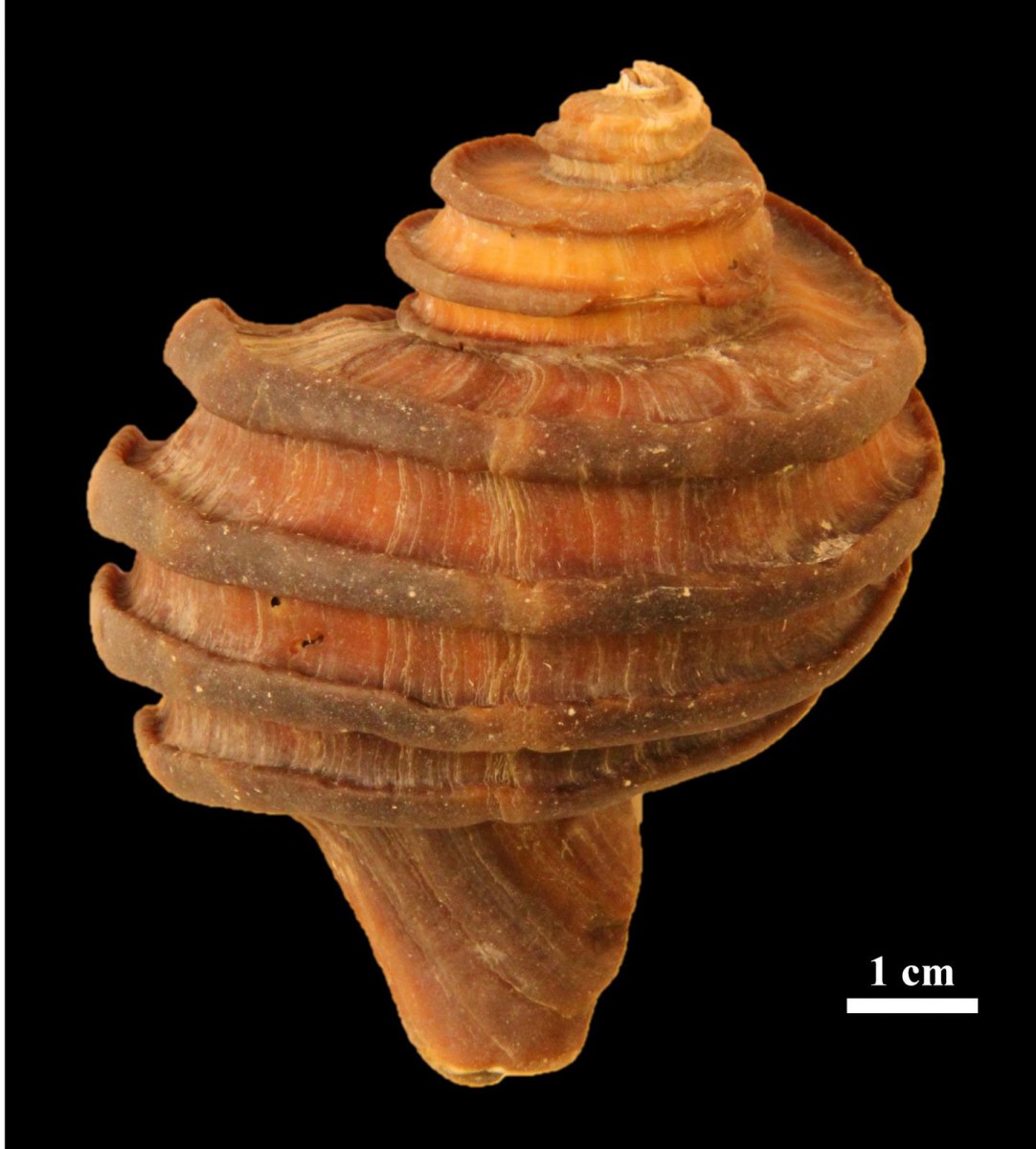 In fossil shells from southern Maryland

A team of US scientists have found “beautifully preserved” 15 million-year-old thin protein sheets in fossil shells from southern Maryland. Their findings are published in the inaugural issue of Geochemical Perspectives Letters, the new peer-reviewed journal of the European Association of Geochemistry.

The team – John Nance, John Armstrong, George Cody, Marilyn Fogel, and Robert Hazen – from the Carnegie Institution (Washington DC) collected samples from Calvert Cliffs, along the shoreline of the Chesapeake Bay, a popular fossil collecting area. The Cliffs were named after the mother of the English explorer John Smith (of John Smith and Pocohontas fame). The team found fossilized shells of a snail-like, shallow marine-dwelling mollusk called Ecphora that lived in the mid-Miocene era–between 8 and 18 million years ago.

Ecphora is known for an unusual reddish-brown shell color, making it one of the most distinctive North American mollusks of its era. This coloration is preserved in fossilized remains, unlike the fossilized shells of many other fossilized mollusks from the Calvert Cliffs region, which have turned chalky white over the millions of years since they housed living creatures.

Shells are made from crystalline compounds of calcium carbonate interleaved with an organic matrix of proteins and sugars proteins and sugars. These proteins are called shell-binding proteins by scientists, because they help hold the components of the shell together. They also contain pigments, such as those responsible for the reddish-brown appearance of the Ecphora shell. These pigments can bind to proteins to form a pigment-protein complex.

The fact that the coloration of fossilized Ecphora shells is so well preserved suggested to the research team that shell proteins bound to these pigments in a complex might also be preserved. “We were amazed to find that the shells, once dissolved in dilute acid, released intact thin sheets of shell proteins more than a centimeter across” said main author John Nance. Chemical analysis including spectroscopy and electron microscopy of these sheets revealed that they are indeed shell proteins that were preserved for up to 15 million years.

“These are some of the oldest and best-preserved examples of a protein ever observed in a fossil shell,” said author Robert Hazen.

Remarkably, the proteins share characteristics with modern mollusk shell proteins. They both produce thin, flexible sheets of residue that’s the same color as the original shell after being dissolved in acid. Of the 11 amino acids found in the resulting residue, aspartate and glutamate are prominent, which is typical of modern shell proteins. Further study of these proteins could be used for genetic analysis to trace the evolution of mollusks through the ages, as well as potentially to learn about the ecology of the Chesapeake Bay during the era in which Ecphora thrived.

Commenting, the journal’s founding co-editor Bruce Watson (Rensselaer Polytechnic Institute, USA) said: “As the authors say, this find presents a potentially exciting opportunity. It gives us a window back around 15 million years, which is about the same time the first mammoths appeared. This gives us an unprecedented possibility for amino acid sequencing and phylogenetic analysis of gastropod evolution. It is remarkable to be able to confirm that these ancient proteins share many of the characteristics of modern mollusk proteins”.

The European Association of Geochemistry President, Liane G. Benning (Leeds University), added: “We are happy to launch our new Society Journal with such a high quality paper. The team described some of the oldest fossil samples of this type ever found. Ecphora is now an extinct species, but this work will help us understand the relationship between these beautiful creatures and other mollusks of the period”.