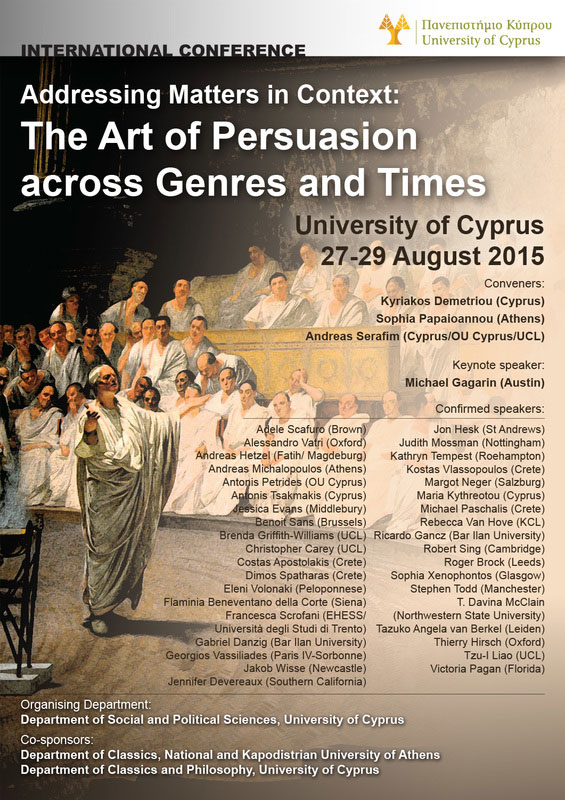 The Art of Persuasion across Genres and Times﻿

“Addressing Matters in Context: The Art of Persuasion across Genres and Times” is the title of the international conference due to take place on August 27-29, 2015 at the University of Cyprus.

Most people think of persuasion in antiquity only in the context of the law-court, where two litigants present their arguments in an attempt to persuade the judges. In reality, however, persuasion was employed in antiquity across many genres and this very generic flexibility makes the forms of persuasion an inherently interesting subject for inquiry for scholars of ancient literature. Since antiquity the art of rhetorical persuasion has also been employed in public speaking. Rhetoric is central to political processes and outcomes: it gives the speakers the power to influence their audience to achieve their political aims. Although what we know today as the art of public speaking has undergone continuous change since the days of Pericles, Demosthenes, Cicero, and Quintilian, nevertheless, it has been suggested that Greco-Roman rhetoric has influenced how contemporary politics is articulated.

This three-day conference seeks, therefore, to explore the generic conventions, principles, techniques, and results of persuasion in Greco-Roman oratory and historiography and in contemporary political discourse. It aims:

1.    To explore the art of persuasion across ancient genres, specifically how persuasion is tackled in Greco-Roman historiography as opposed to oratory. In particular: what are the convergences and divergences in the techniques of audience persuasion that are used in historiographical speeches and in oratorical speeches? Issues for discussion may include:
-the use of logical and religious argumentation
-the depiction of the character of the speaker
-the arousal of emotions
-war-peace speeches
-addresses to the audience
-time and narrative, circumstantial narrative and lively descriptions (ekphrasis/enargeia)
-performance (gesticulation and other subtle forms of communication between the speaker and the audience)
-references to civic identity, to the ancestors, and to civic myths etc.

2.    To explore how, and to what extent, Greco-Roman rhetoric has influenced the way contemporary political discourse is articulated. We welcome papers exploring the influence of ancient deliberative and epideictic speeches on modern ones (e.g. arguments, language, rhetorical tropes, and modes of persuasion/deception). We also welcome papers on the parallels between ancient and modern problems (e.g. financial crises in antiquity and the present day) and the rhetoric used by politicians to cope with them.