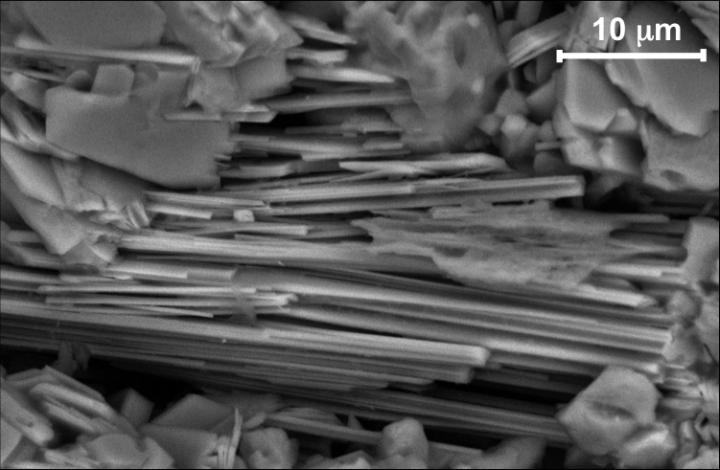 The discovery of a fiber-reinforced, concrete-like rock formed in the depths of a dormant supervolcano could help explain the unusual ground swelling that led to the evacuation of an Italian port city and inspire durable building materials in the future, Stanford scientists say.

The “natural concrete” at the Campi Flegrei volcano is similar to Roman concrete, a legendary compound invented by the Romans and used to construct the Pantheon, the Colosseum, and ancient shipping ports throughout the Mediterranean.

“This implies the existence of a natural process in the subsurface of Campi Flegrei that is similar to the one that is used to produce concrete,” said Tiziana Vanorio, an experimental geophysicist at Stanford’s School of Earth, Energy & Environmental Sciences.

Campi Flegrei lies at the center of a large depression, or caldera, that is pockmarked by craters formed during past eruptions, the last of which occurred nearly 500 years ago. Nestled within this caldera is the colorful port city of Pozzuoli, which was founded in 600 B.C. by the Greeks and called “Puteoli” by the Romans.

Beginning in 1982, the ground beneath Pozzuoli began rising at an alarming rate. Within a two-year span, the uplift exceeded six feet-an amount unprecedented anywhere in the world. “The rising sea bottom rendered the Bay of Pozzuoli too shallow for large craft,” Vanorio said.

Making matters worse, the ground swelling was accompanied by swarms of micro-earthquakes. Many of the tremors were too small to be felt, but when a magnitude 4 quake juddered Pozzuoli, officials evacuated the city’s historic downtown. Pozzuoli became a ghost town overnight.

A teenager at the time, Vanorio was among the approximately 40,000 residents forced to flee Pozzuoli and settle in towns scattered between Naples and Rome. The event made an impression on the young Vanorio, and inspired her interests in the geosciences. Now an assistant professor at Stanford, Vanorio decided to apply her knowledge about how rocks in the deep Earth respond to mechanical and chemical changes to investigate how the ground beneath Pozzuoli was able to withstand so much warping before cracking and setting off micro-earthquakes.

“Ground swelling occurs at other calderas such as Yellowstone or Long Valley in the United States, but never to this degree, and it usually requires far less uplift to trigger earthquakes at other places,” Vanorio said. “At Campi Flegrei, the micro-earthquakes were delayed by months despite really large ground deformations.”

To understand why the surface of the caldera was able to accommodate incredible strain without suddenly cracking, Vanorio and a post-doctoral associate, Waruntorn Kanitpanyacharoen, studied rock cores from the region. In the early 1980s, a deep drilling program probed the active geothermal system of Campi Flegrei to a depth of about 2 miles. When the pair analyzed the rock samples, they discovered that Campi Flegrei’s caprock-a hard rock layer located near the caldera’s surface-is rich in pozzolana, or volcanic ash from the region.

The scientists also noticed that the caprock contained tobermorite and ettringite-fibrous minerals that are also found in manmade concrete. These minerals would have made Campi Flegrei’s caprock more ductile, and their presence explains why the ground beneath Pozzuoli was able to withstand significant bending before breaking and shearing. But how did tobermorite and ettringite come to form in the caprock?

Once again, the drill cores provided the crucial clue. The samples showed that the deep basement of the caldera-the “wall” of the bowl-like depression-consisted of carbonate-bearing rocks similar to limestone, and that interspersed within the carbonate rocks was a needle-shaped mineral called actinolite.

“The actinolite was the key to understanding all of the other chemical reactions that had to take place to form the natural cement at Campi Flegrei,” said Kanitpanyacharoen, who is now at Chulalongkorn University in Thailand.

From the actinolite and graphite, the scientists deduced that a chemical reaction called decarbonation was occurring beneath Campi Flegrei. They believe that the combination of heat and circulating mineral-rich waters decarbonates the deep basement, prompting the formation of actinolite as well as carbon dioxide gas. As the CO2 mixes with calcium-carbonate and hydrogen in the basement rocks, it triggers a chemical cascade that produces several compounds, one of which is calcium hydroxide. Calcium hydroxide, also known as portlandite or hydrated lime, is one of the two key ingredients in manmade concrete, including Roman concrete. Circulating geothermal fluids transport this naturally occurring lime up to shallower depths, where it combines with the pozzolana ash in the caprock to form an impenetrable, concrete-like rock capable of withstanding very strong forces.

From ashes to concrete

“This is the same chemical reaction that the ancient Romans unwittingly exploited to create their famous concrete, but in Campi Flegrei it happens naturally,” Vanorio said.

In fact, Vanorio suspects that the inspiration for Roman concrete came from observing interactions between the volcanic ash at Pozzuoli and seawater in the region. The Roman philosopher Seneca, for example, noted that the “dust at Puteoli becomes stone if it touches water.”

“The Romans were keen observers of the natural world and fine empiricists,” Vanorio said. “Seneca, and before him Vitruvius, understood that there was something special about the ash at Pozzuoli, and the Romans used the pozzolana to create their own concrete, albeit with a different source of lime.”

Pozzuoli was the main commercial and military port for the Roman Empire, and it was common for ships to use pozzolana as ballast while trading grain from the eastern Mediterranean. As a result of this practice, volcanic ash from Campi Flegrei-and the use of Roman concrete-spread across the ancient world. Archeologists have recently found that piers in Alexandria, Caesarea, and Cyprus are all made from Roman concrete and have pozzolana as a primary ingredient.

Interestingly, the same chemical reaction that is responsible for the unique properties of the Campi Flegrei’s caprock can also trigger its downfall. If too much decarbonation occurs-as might happen if a large amount of saltwater, or brine, gets injected into the system-an excess of carbon dioxide, methane and steam is produced. As these gases rise toward the surface, they bump up against the natural cement layer, warping the caprock. This is what lifted Pozzuoli in the 1980s. When strain from the pressure buildup exceeded the strength of the caprock, the rock sheared and cracked, setting off swarms of micro-earthquakes. As pent-up gases and fluids vent into the atmosphere, the ground swelling subsided. Vanorio and Kanitpanyacharoen suspect that as more calcium hydroxide was produced at depth and transported to the surface, the damaged caprock was slowly repaired, its cracks “healed” as more natural cement was produced.

Vanorio believes the conditions and processes responsible for the exceptional rock properties at Campi Flegrei could be present at other calderas around the world. A better understanding of the conditions and processes that formed Campi Flegrei’s caprock could also allow scientists to recreate it in the lab, and perhaps even improve upon it to engineer more durable and resilient concretes that are better able to withstand large stresses and shaking, or to heal themselves after damage.

“There is a need for eco-friendly materials and concretes that can accommodate stresses more easily,” Vanorio said. “For example, extracting natural gas by hydraulic fracturing can cause rapid stress changes that cause concrete well casings to fail and lead to gas leaks and water contamination.”