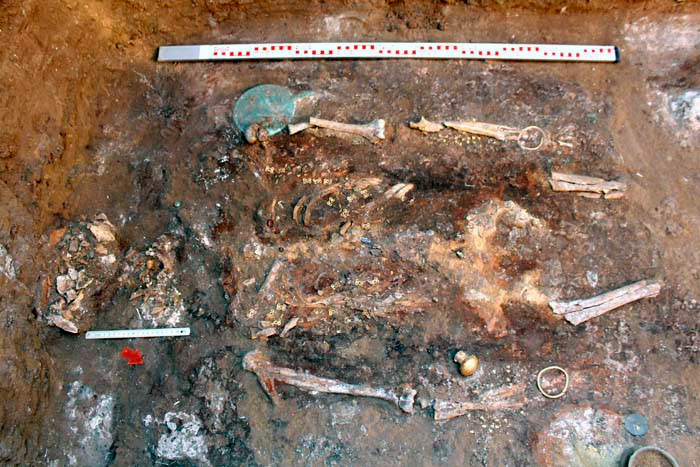 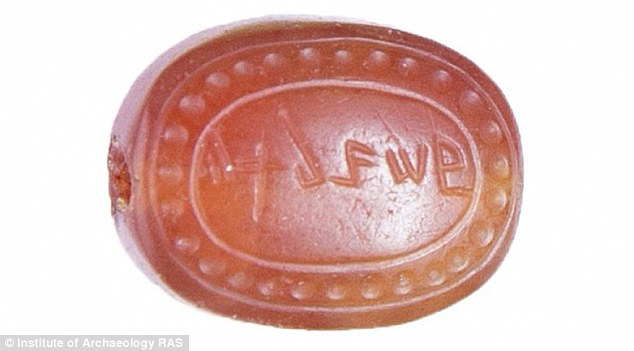 Near the city of Rostov-on-Don

A 2,000-year-old unlooted woman warrior burial was found during excavations conducted by the Institute of Archaeology of the Russian Academy of Sciences, in the framework of a new airport construction near the city of Rostov-on-Don. The woman was a Sarmatian, while early analysis of her teeth suggests she has reached a great age. She was buried with a man, whose tomb was looted.

“The depth of the tomb is four metres and it was covered with a wooden decking. At the edge of the grave pit were found the remains of a harness and more than 100 iron arrowheads. According to ancient historians, Sarmatian women participated in hostilities and this find of arrowheads is indirect confirmation of this,” head of excavations Roman Mimokhod stated.

Within the grave more than 100 iron arrowheads, gold earrings with pendant chains and a bronze mirror were found.

Her dress was decorated with stamped buckles of gold leaf in the form of a stylised ram’s head, and beads combined with gold triangular plaques. The woman wore a bracelet on each hand.

“On her breasts were various beads, among which was a gem with a single-line Phoenician or early Aramaic inscription. At her pelvis lay a gold vial. This had a tight lid and its contents are fossilized,” Mimokhod said. Archaeologists believe this contained an incense. “By her right hand were fragments of wooden dishes and a cup. At her feet there were fragments of a bronze bucket (ladle) with floral ornaments and the image of the Gorgon’s head on a stick. In the north-eastern part of the grave were located four ceramic vessels.”
Also inside the grave a collection of knives and an unfinished sword with brooches on its handle were kept.

A fact that puzzles archaeologists is that the grave goods date from the 1st century BC to the 1st century AD, which is rather unique. “This can mean that the most ancient things were handed down for a long time and finally were buried with this noble woman,” Mimokhod said.

The Sarmatians migrated from Central Asia to the Ural Mountains between the 6th and 4th century BC and eventually settled in most of southern European Russia and the eastern Balkans.

Unmarried Sarmatian females, especially in the society’s early years, took arms alongside men. Sarmatian female warriors may have inspired the Greek tales of the Amazons.