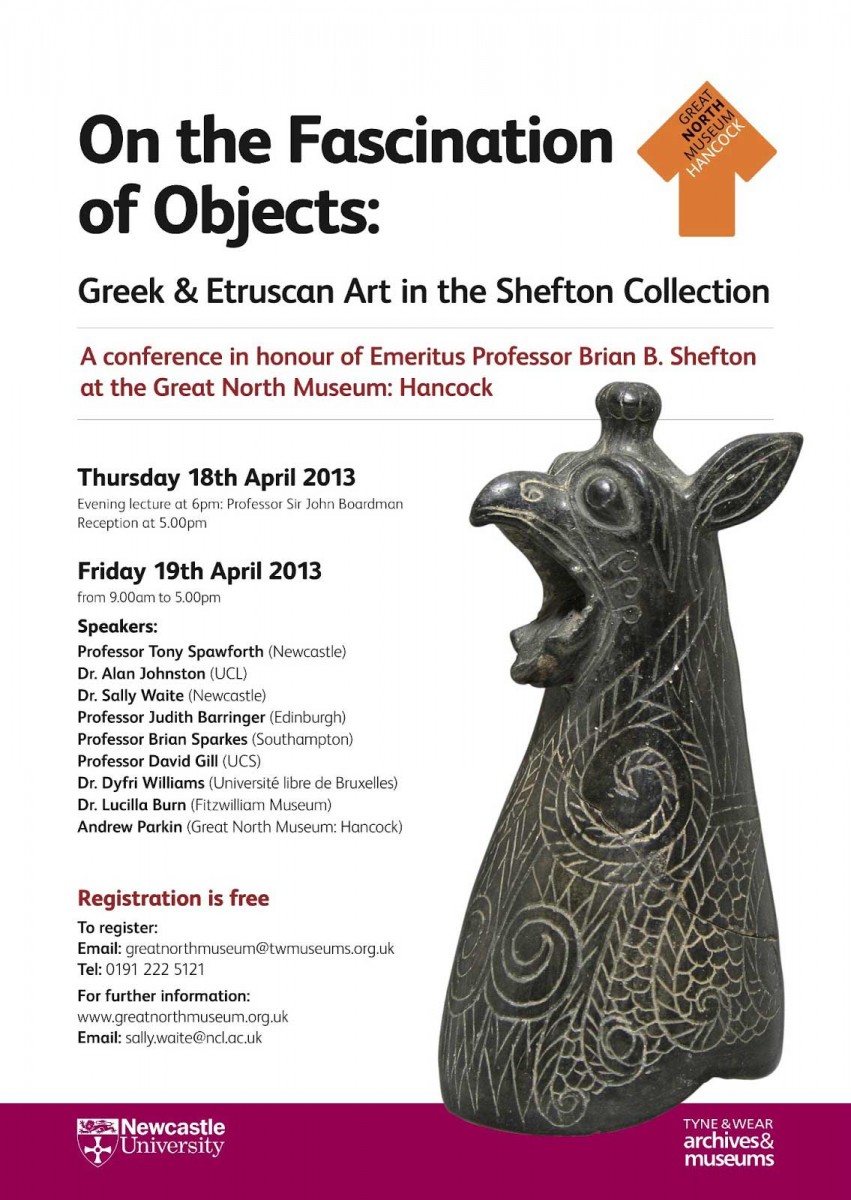 On the Fascination of Objects

Greek and Etruscan Art in the Shefton Collection

In April the Great North Museum in Newcastle upon Tyne will be hosting a conference  entitled “On the Fascination of Objects” in honour of the late Professor Brian B. Shefton. The conference will be held on Thursday 18th and Friday 19th of April. On the first day the evening lecture will be given by Professor Sir John Boardman. On Friday a number of eminent scholars, such as Dr. Alan Johnston, Dr. Sally Waite, Professor Judith Barringer, Professor Brian Sparkes, Professor David Gill, and others, will give lectures about the creation of a classical collection from the late 1950s putting an emphasis on the objects acquired by the former Greek Museum of Newcastle University.

Professor Brian Shefton died aged 92, on January 2012. He was a leading expert on Greek and Etruscan artefacts. He joined Newcastle University in 1955 as a lecturer in Greek Archaeology and Ancient History. He also began to build up a collection of ancient Greek treasures, which led to the university’s Greek Museum. This museum was renamed the Shefton Museum of Greek Art and Archaeology to honour Professor Shefton.

The Shefton Collection of Greek Art and Archaeology takes its name from its founder, Professor Brian Shefton, who taught Greek archaeology at Newcastle University from 1955 until his retirement in 1984. The collection was built up, from small beginnings, by Professor Shefton until it became the most important collection of archaeological material from the Greek world in the North of England.

One of the main strengths of the collection is the extensive range of pottery, covering all the major periods of Greek history from the Mycenaean to the Hellenistic. In particular, there are some fine pieces of Attic red-figure, including works by recognised artists such as the Achilles painter, as well as over one hundred examples of Attic black-glaze ware. Of special note amongst the Attic pottery is the range of vessels used in the symposion (wine drinking party), such as kraters for mixing water and wine, amphorae for storing wine and a large number of wine drinking cups. The collection also possesses several Attic white-ground lekythoi used as oil flasks for offerings at tombs. In addition to the Athenian pottery, there is a significant number of Corinthian vases, as well as examples of Geometric, South Italian, Cypriot and Etruscan pottery styles.

A further important aspect of the collection is the group of metal objects, mostly of bronze although there is a small selection of gold and silver jewellery and some lead appliqués. The bronzes include fittings for metal vessels, such as handles, as well as items used in domestic life, like the Macedonian situla (wine bucket) complete with abstract decoration. Bronze figurines of animals are well represented, most of which would have been offered as votives in sanctuaries. Pride of place, however, goes to the Greek arms and armour, including a Corinthian and an Illyrian helmet. Weapons include several Bronze Age swords and a rare bronze spearbutt, probably of Macedonian manufacture and dating to the late 4th century BC; this is inscribed MAK, the only example so inscribed and hinting at the army of Philip of Macedon. There is also a fine collection of Greek and Etruscan bronze mirrors.

A number of terracotta figures are on display in the Museum in addition to a series of architectural terracottas from Sicily and Southern Italy. The most striking of these is a representation of a gorgon of Sicilian origin, dating to the late 6th century BC. This would have been placed on the roof of a building to scare away evil spirits.

The collection has a range of sculpture including several portrait busts as well as some relief sculpture. One fine figure of Nike is now known to have belonged to John Ruskin and features in several of his sketches and letter entries. The most imposing piece, however, is the colossal porphyry foot from 2nd century AD Roman Egypt. This may have been a votive object offered to a god of healing in thanks for a cure of a foot ailment or in encouragement of the same; alternatively, it may be all that survives of a colossal statue standing about 6 metres high.