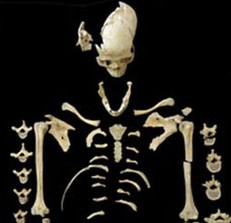 Life in the Neolithic Age was not easy: the farming work was exhausting, and medical care was more than inadequate from the present point of view. These harsh conditions left their mark on the people’s health – infectious diseases, deficiency symptoms and degenerative changes were commonplace. “However, except alveolar inflammation and dental caries, the ‘individual G61’ was not affected by any of these diseases – a female skeleton from the Neolithic graveyard of Stuttgart-Mühlhausen,” says Dr. Heike Scherf of the Senckenberg Center for Human Evolution and Paleoenvironment at the University of Tübingen.

Together with her colleagues, the researcher found indications of leukemia on the skeleton of a woman, who was between 30 and 40 years of age at the time of death. “We examined several bones of the skeleton with our high-resolution computed tomography system, and we found an unusual loosening of the interior bone tissue – the cancellous bone – in the upper right humerus and the sternum,” adds Scherf.

In adults, the ends of the humeri and the sternum, as well as the vertebrae, ribs, skull, pelvis and the ends of the femurs contain hematopoietic (blood-forming) stem cells. In these locations, leukemia – colloquially known as blood cancer – can occur.

The team of scientists working with the paleoanthropologist Scherf compared the humerus of the 7000 year old “patient” with humeri of 11 individuals from the same site in southern Germany, where they were excavated between 1982 and 1993.

“None of the other specimens showed this significant pattern,” explains Scherf, and she adds, “Even though they come from the same site and belong to the same age group.”

Other diseases that cause similar symptoms were refuted by the scientist from Tübingen: “The biological age and the restriction of the findings to the humerus and sternum counter-indicate osteoporosis. Hyperparathyroidism, a hyperfunction of the parathyroid gland, can be ruled out because typical characteristics for this pathology, which manifest in other parts of the skeleton, such as the skull and the finger bones were not found.”

According to Scherf, the results therefore strongly indicate a case of leukemia in ‘individuum G61.’ This would be the oldest evidence of leukemia to date. “However, we cannot determine whether the woman actually died from the disease,” summarizes Scherf.