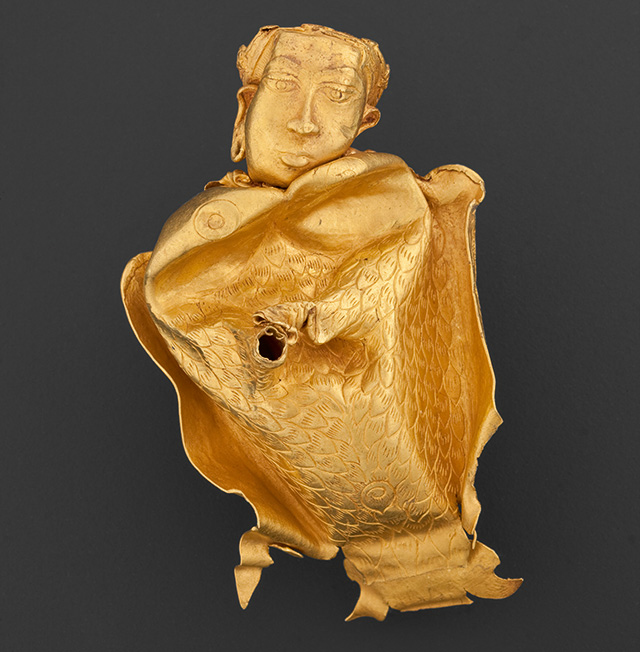 An exhibition of gold artefacts from the Philippines opened earlier this month at the Asia Society in New York. “Philippine Gold: Treasures of Forgotten Kingdoms” will run until 3 January 2016.

The exhibition presents spectacular works of gold primarily discovered over the past forty years on the Philippine islands of Luzon, the Visayas, and Mindanao. The regalia, jewelry, ceremonial weapons, and ritualistic and funerary objects attest to the recently uncovered evidence of prosperity and achievement of Philippine polities that flourished between the tenth and thirteenth centuries, long before the Spanish discovered and colonized the region. Although the forms and styles of the majority of these works developed locally, some indicate that Philippine craftsmen had been exposed to objects from beyond their borders through the robust cultural connections and maritime trade in Southeast Asia during what was an early Asian economic boom.

The Philippine archipelago of over 7,000 islands lies between the Pacific Ocean and the Indian Ocean in the region off the Asian mainland known as Island Southeast Asia. During the time when artists and craftsmen created the works in this exhibition, mariners, merchants, missionaries, and emissaries plied the waters connecting the tropical isles to distant lands including China and India. Monsoon winds dictated the comings and goings of merchant ships—the time of year they docked, how long they stayed, and when they set sail. Port settlements near protected coves such as ancient Butuan by the mouth of the Agusan River where it empties into Butuan Bay in northeastern Mindanao attracted ships and sailors seeking refuge from the strong southwest winds that blew from May to November. Some of these merchant ships traded for the natural resources of what early Indian texts refer to as Survarnadvipa, or “Islands of Gold,” a geographic place name that scholars believe refers to the islands of Southeast Asia, including Sumatra in Indonesia and nearby Mindanao and Luzon in the Philippines.

The Philippines has the second largest gold deposit in the world. The works on view at the exhibition —from tiny gold tweezers to fabulous pieces of jewelry—reveal that these natural resources were readily exploited by the local people between the tenth and thirteenth centuries. While the diverse objects offer clues about those who produced and used them, future finds will hopefully provide further information about the once flourishing but now lost cultures that created these sophisticated treasures.