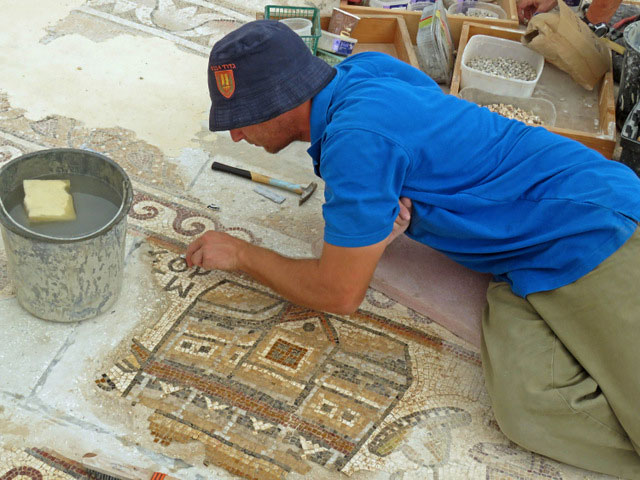 Byzantine mosaic depicting a map with streets and buildings

To be presented at the “Factories from Within” festival

A 1,500 year old mosaic, depicting a map with streets and buildings, was exposed about two years ago in archaeological excavations the Israel Antiquities Authority conducted together with school children and employees from the Qiryat Gat Industrial Park. This extraordinary mosaic served as the floor of a church dating to the Byzantine period. It was removed from the site for the purpose of conservation and was recently returned to its permanent location in the industrial park. The mosaic will be revealed to the public for the first time at the “Factories from Within” festival to be held October 1, during the Sukkot holiday. According to archaeologists Sa’ar Ganor and Dr. Rina Avner of the Israel Antiquities Authority, “The appearance of buildings on mosaic floors is a rare phenomenon in Israel. The buildings are arranged along a main colonnaded street of a city, in a sort of ancient map. A Greek inscription preserved alongside one of the buildings exposed in the mosaic indicates that the place which is depicted is the settlement חורטסו, in Egypt. According to Christian tradition, the prophet Habakkuk was buried in חורטסו. The appearance of this Egyptian city on the floor of the public building in Qiryat Gat might allude to the origin of the church’s congregation”. The mosaic pavement was part of the floor of a church that did not survive. Two sections of the mosaic were preserved; animals such as a rooster, deer and birds and a special goblet with red fruits are portrayed on one part of the pavement. According to Ganor, “The artist utilized tesserae of seventeen different colors in preparing the mosaic. The investment in the raw materials and their quality are the best ever discovered in Israel”. A Nile River landscape in Egypt consisting of a boat with a rolled-up sail, streets and buildings is depicted on the second carpet. The buildings are portrayed in detail and in three dimensions, and they have two-three stories, balconies and galleries, roofs, roof tiles and windows.

The “Factories from Within” festival will be held this year for the first time in the Qiryat Gat Industrial Park during the Sukkot holiday, in what will become an annual tradition. On October 1 the Qiryat Gat Industrial Park will be turned into an event-filled arena of one-time performances in unconventional locations, with rare visits inside some of the best known factories in Israel. The children will enjoy performances of Adon Shoko with songs by Arik Einstein, “Shukhnat Hop” and a variety of creative activities. A unique offering of events awaits adults with appearances by Shalom Hanoch and Moshe Levi in a performance of “Exit” that will be held in a printer factory, the singer Dikla will appear in the park, and Hemi Rudner will hold a fascinating master’s class in the Negev Beer brewery. The project will give the general public a rare opportunity to peek into the hidden world of the factories in one of the country’s most modern industrial areas. The “Factories from Within” festival is the inaugural event slated to launch the 60th anniversary of Qiryat Gat, and the public is invited to enjoy the unique musical and visual experience.