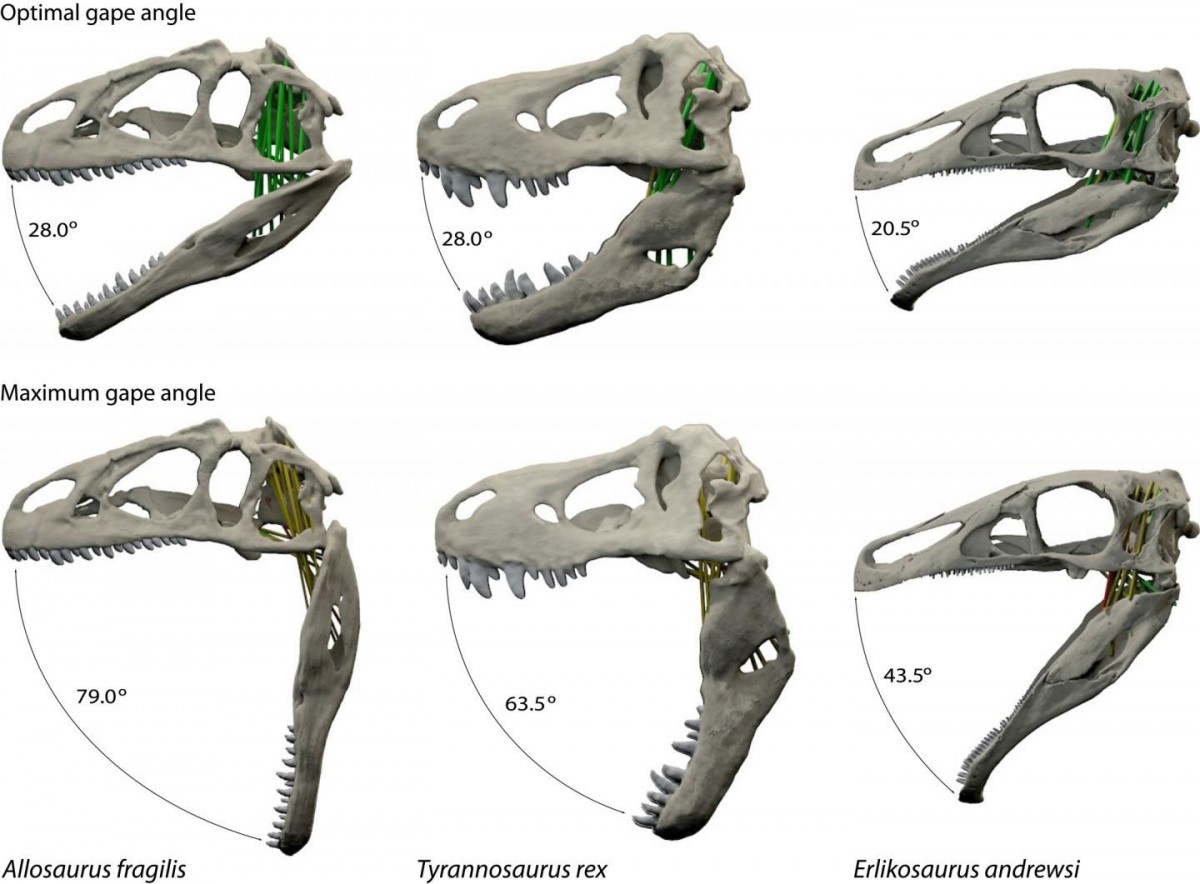 The relation between jaw musculature, feeding style and the maximal possible jaw gape

Just how bad was T. rex‘s bite? New research from the University of Bristol has found that the feeding style and dietary preferences of dinosaurs was closely linked to how wide they could open their jaws.

Using digital models and computer analyses, Dr Stephan Lautenschlager from Bristol’s School of Earth Sciences studied the muscle strain during jaw opening of three different theropod dinosaurs with different dietary habits. Theropods (from the Greek for “beast-footed”) were a diverse group of two-legged dinosaurs that included the largest carnivores ever to walk the Earth.

Dr Lautenschlager said: “Theropod dinosaurs, such a Tyrannosaurus rex or Allosaurus, are often depicted with widely-opened jaws, presumably to emphasise their carnivorous nature. Yet, up to now, no studies have actually focused on the relation between jaw musculature, feeding style and the maximal possible jaw gape.”

The research looked at Tyrannosaurus rex, a large-sized meat-eating theropod with a massively built skull and up to 15cm long teeth; Allosaurus fragilis, a more lightly built but predatory and meat-eating theropod; and Erlikosaurus andrewsi, a closely related but plant-eating member of the theropod family.

Dr Lautenschlager said: “All muscles, including those used for closing and opening the jaw, can only stretch a certain amount before they tear. This considerably limits how wide an animal can open its jaws and therefore how and on what it can feed.”

In order to fully understand the relation between muscle strain and jaw gape, detailed computer models were created to simulate jaw opening and closing, while measuring the length changes in the digital muscles. The dinosaur species in the study were also compared to their living relatives, crocodiles and birds, for which muscle strain and maximal jaw gape are known.

The study found that the carnivorous Tyrannosaurus and Allosaurus were capable of a wide gape (up to 90 degrees), while the herbivorous Erlikosaurus was limited to small gape (around 45 degrees).

Between the two carnivores, results show that Tyrannosaurus could produce a sustained muscle (and, therefore, bite) force for a wide range of jaw angles, which would be necessary for biting through meat and skin and crushing bone.

Dr Lautenschlager said: “We know from living animals that carnivores are usually capable of larger jaw gapes than herbivores, and it is interesting to see that this also appears to be the case in theropod dinosaurs.”