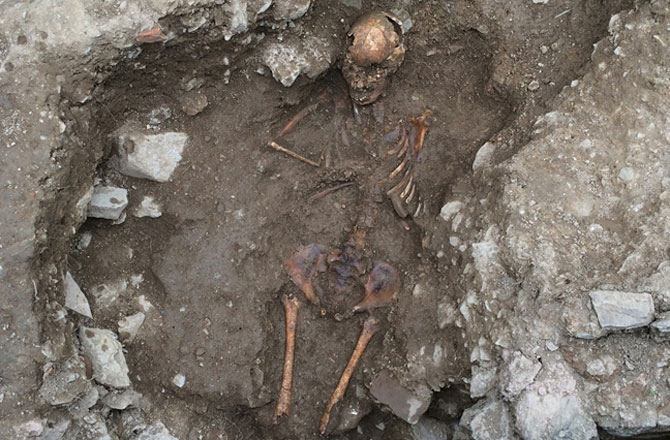 Probably considered a witch and killed

Archaeologists in Italy have uncovered a Medieval skeleton of a teenage girl, burnt and thrown in a pit, as was the practice with witches at the time. The discovery was made at the complex of San Calocero in Albenga on the Ligurian Riviera, by a team led by scientific director Philippe Pergola, professor of topography of the Orbis Christianus Antiquus at the Pontifical Institute of Archaeology at the Vatican.

The grave was covered with heavy stone slabs, indicating along with the fact that she was burnt and thrown in the pit that she was considered a danger, probably a witch. The slabs probably aimed at preventing her from rising from the grave. The girl, 4.75 feet tall, was 15-17 years old when she died and was burnt at another location before being brought to San Calocero to be buried.

According to anthropologist Elena Dellù, the girl was thrown in the pit, with her head leaning on the vertical wall, her chin almost touching the breastbone.

Analysis has shown that she was ill-healthed, suffering of severe iron deficiency anaemia, as well as enamel hypoplasia, probably due to malnutrition. The symptoms of her condition, such as hematomas and fainting, might have scared the community.

The excavation, which is currently funded by private foundations (Fondazione Nino Lamboglia of Rome and Fondazione bancaria De Mari of Savona) will continue in 2016.