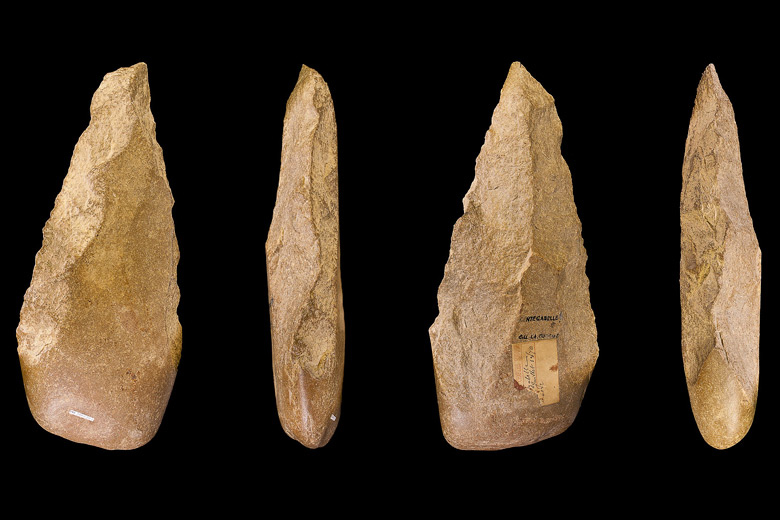 Professor Marcus Feldman’s lab (Stanford University) has devised a computer model that could help solve a long-standing mystery over why the introduction of new tools in prehistoric societies sometimes comes in periodic bursts.

Many animals exhibit learned behaviors, but humans are unique in their capacity to build on existing knowledge to make new innovations. Understanding the patterns of how new generations of tools emerged in prehistoric societies, however, has long puzzled scientists.

The reason for these sudden changes is still up for debate, but researchers have attributed this pattern to external events, such as a change in environment, the evolution of new cognitive capacity or even the evolution of a culture. New work by Stanford biologists could provide a virtual way of testing these hypotheses.

In a paper published in the Proceedings of the National Academy of Sciences, Marcus Feldman, a professor of biology at Stanford, and postdoctoral fellows Oren Kolodny and Nicole Creanza introduce a computer model of cultural evolution that reproduces all of these patterns in the archaeological record.

The researchers started from a point of view that a pattern of punctuated bursts of creativity can be a feature of cultural evolution itself, as opposed to a cultural response to an external change.

In this model, some human innovations require large leaps of spontaneous insight, but other innovations can be created by drawing parallels with existing technology. One invention can inspire the need for a new companion tool, or existing technologies can be combined to make a new tool. These different processes of innovation occur at different rates, and the relationships between these processes determine whether the accumulation of tools occurs in a stepwise pattern.

First, the researchers simulate a population of a certain size. Then they allow new “large leaps” in knowledge to occur at a certain rate per person. Once an individual in the simulated population has invented something really novel – the researchers assigned mathematical values to things such as shovels and boats – the model simulates whether other innovations that are dependent on this novel idea might be invented quickly thereafter.

A significant difference between the new model proposed and previous efforts is the Stanford scientists do not assume that all human innovations are created in the same way.

“It was insightful to realize that tools can create ‘ecological niches’ for other tools to fill,” Kolodny said. “Once you invent something like a raft, it paves the way for the invention of a paddle that’ll allow you to manipulate it, tools that will help you mend it and eventually also new technologies for offshore fishing or transport of things.”

The researchers’ model also considers ways that tools are lost to a people, by incorporating two properties intrinsic to cultural evolution: the distribution of knowledge in different pockets of a population and the impact of environmental change.

“In general, humans inherit genetic traits directly from our parents,” Creanza said. “In contrast, cultural traits – tools, beliefs and behaviors that are transmitted by learning – can be learned not only from parents but also from teachers and peers.”

In the model, certain knowledge can be concentrated in a subset of a population, such as medicine men and medicine women. This concentration of knowledge subsequently leads to increased susceptibility to the loss of this knowledge.

Tools can also be lost following an environmental change, or if a population migrates to a new environment. A fluctuating environment can lead to large-scale cultural losses when tools are specialized for use in a particular environment. Similarly, a rapidly changing environment can select for “generalist” tools that are useful under a wider range of conditions.

Over time, the researchers believe the model will help reveal the drivers of these observed shifts in tool repertoire, which are otherwise near impossible to suss out from the archaeological record alone.

“We don’t completely understand the sudden bursts of cultural accumulation in the archaeological record, but researchers have proposed that an environmental change or a shift in cognitive capacity could spur a ‘cultural explosion,'” Creanza said. “Our model demonstrates that these ‘explosions’ could also be a feature of cultural evolution itself, as long as some innovations are dependent on others.”