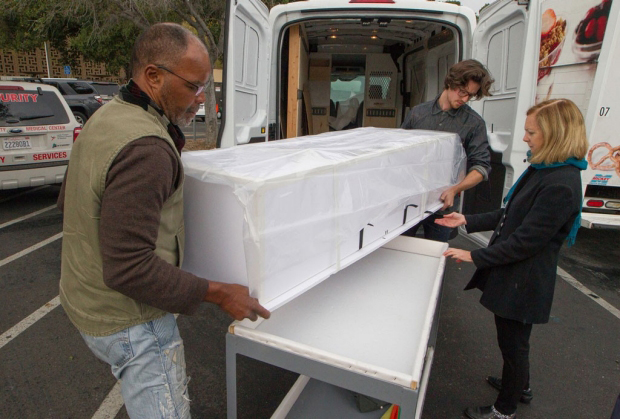 The woman beneath the bandages

CT scan on woman who died in Egypt more than 3,000 years ago

A San Francisco museum brought an ancient mummy to the School of Medicine for a set of CT scans to learn more about the person beneath the bandages.

Thousands of years ago lived a woman in the Egyptian city of Asyut, on the west side of the Nile River Valley, 375 miles south of the Mediterranean city of Alexandria. Her true name is unknown, but today some call her Hatason.

Asyut was at the crossroads of several trade routes. It was rich in culture but, because of all those roads, vulnerable to attack, and therefore protected by well-armed soldiers. Asyut lay just below a constriction in the river that allowed Asyut officials to stop traders carrying cargo downstream to the cities of the north and extract tolls from them.

Asyut also lay at the north end of the infamous Darb el-Arba`īn, the Forty Days’ Road, coming through the desert from Darfur; the 1,100-mile road was a major route for trading gold, ivory, spices, animals — and people. Until well into the 18th century, millions of slaves were forced to walk out of Africa on the Darb el-Arba`īn.

When Hatason died, about 3,200 years ago, someone took the time to mummify her. Her coffin depicts a woman in everyday clothes. But did her mummified remains originally belong in that coffin? Stanford Egyptologist Anne Austin explained, “When mummies came into the collections of most museums in the late 19th century and early 20th century, they were dated and sexed based on the coffin the mummy was found in. We now know that rampant reuse of coffins means these assumptions may be wrong.”

Sometime in the 19th century, Hatason’s mummified body was moved from its tomb and eventually shipped to foggy San Francisco, where she was put on display in Golden Gate Park as part of the California Mid-Winter International Exposition. In March 1895, her body was donated to the city’s new de Young Museum. Since then, she has spent 35 years visiting the Rosicrucian Museum in San Jose, taken a yearlong trip to Hawaii and resided at the Legion of Honor, a San Francisco museum overlooking the Pacific Ocean.

On Nov. 24, Hatason took a day trip to Stanford’s Department of Radiology to undergo a computed tomography scan that may tell Legion of Honor curator Renee Dreyfus more about who Hatason was. Hatason arrived on campus in a white box at about 10 a.m., pursued by nearly a dozen camera-clicking communications staffers from the Legion of Honor and Stanford Medicine. As museum workers wheeled her through the doors of the Grant Building, an elderly bystander demanded to know what was in the box. When told, he frowned and walked away toward the rainy parking lot.

Hatason’s first stop was the zeego imaging lab in a basement near Stanford Hospital. The lab isn’t where you go to find out if you have a tumor; it’s a research lab with a high-end CT scanner, managed by Kerstin Müller, PhD, an instructor of radiology at the medical school, who oversaw the imaging. She put on a full-coverage lead blouse and skirt, decorated with small printed skulls, that protected her from radiation from the scanner. A raft of experts from Stanford, the Legion of Honor and Siemens, which built the zeego scanner, worked seamlessly together to set up and scan Hatason.

The team gently removed Hatason from her box and lifted the small and delicate mummy, wrapped in bright white paper, onto the scanner. The zeego lab has imaged other mummies, including two mummified crocodiles. But the lab specializes in research on imaging the complex 3-D patterns traced by the arteries and veins of the body. When surgeons need to thread a catheter through a blood vessel, it’s extraordinarily difficult to follow the exact path without detailed images. Earlier in November, researchers used the lab’s CT scanner to test a new approach for imaging arteries in a live pig. The lab is also working on a technique for blocking the blood supply to tumors in the liver. But on Nov. 24, the giant machine focused on finding out more about Hatason.

So little is known about her that the museum still wasn’t positive that she was a woman, or how ancient she was. Even her name is an invention. “This mummy is known historically as Hatason,” said Jonathan Elias, PhD, director of the Akhmim Mummy Studies Consortium. “That is not her name. That is a corruption, we believe, of the name of a famous queen, Hatshepsut.” Private collectors of the 1890s liked to think they were purchasing royal mummies. Salesman likely named the mummy Hatason to make her sound like a queen.

Was she the same age as the coffin she has been stored in? Or could it have been from an earlier or later period? As the scanner’s long arms whirred and spun around the mummy, the roomful of radiology and mummy experts stared intently at the images coming up on several computer displays for clues about who she was. The shape of her skull and hips could reveal her sex, and the way she was wrapped and the presence of amulets might say something about her status.

As the crowd in the room jammed together behind a protective wall, the scanning began at Hatason’s head. When the first images of her skull appeared on the screen, Elias, who had flown all the way out from Pennsylvania to view the scans, expressed surprise. He pointed out that Hatason’s brain was still inside her skull, but it was resting atop a pile of dark matter he said was probably sediment. “It’s some form of material added into the brain case while the brain was left inside,” he said. “We have not seen that particular pattern before.”

The bones of her nose were intact, indicating that no one had even tried to remove her brain. Elias said the sediment was likely injected into her skull on purpose. But why? A thousand years later, he said, it would have been standard to remove the brain. In Hatason’s time, mummy experts seemed to have been experimenting with preservation techniques.

No amulets appeared, just an obviously modern metal tack that may have been placed by some long-dead museum curator to hold the mummy’s wrappings in place. After more than 3,000 years, nearly all of the mummy’s organs, muscles and other tissues had vanished, and little held her bones together. As a result, the wrappings outlined the shape of her body, down to the exact shape of her feet. But the cast made by the wrappings was hollow except for her bones, many of which had come loose and lay in jumbles — a hip bone in her former abdomen, foot bones in her thigh.

The bones of her pelvis had collapsed and could not reveal her sex, but Elias believed that her skull was clearly not that of a male. After some thought, he said, “a young adult, a woman.” He and Dreyfus sat together for hours pointing to different clues on the screen in front of them, conferring and explaining things to those around them.

“What would convince you that the mummy is New Kingdom?” Müller asked Elias, referring to the period in Egypt between the 16th and 11th century B.C. The way the mummy was prepared, said Elias. “The fact that there was no excerebration [removal of the brain]. In mummies manufactured after a certain time, there is excerebration almost 100 percent of the time. But we have no excerebration,” he said.

It will take some weeks to process the images, study them further and think about what they say about Hatason and the history of mummies generally, Elias said. “There are not that many mummies from this era that have been researched,” he added. Soon though, a company that specializes in three-dimensional imaging and museum exhibits will work with the Legion of Honor on a special exhibit to display Hatason and a 3-D model of the mummy next spring.