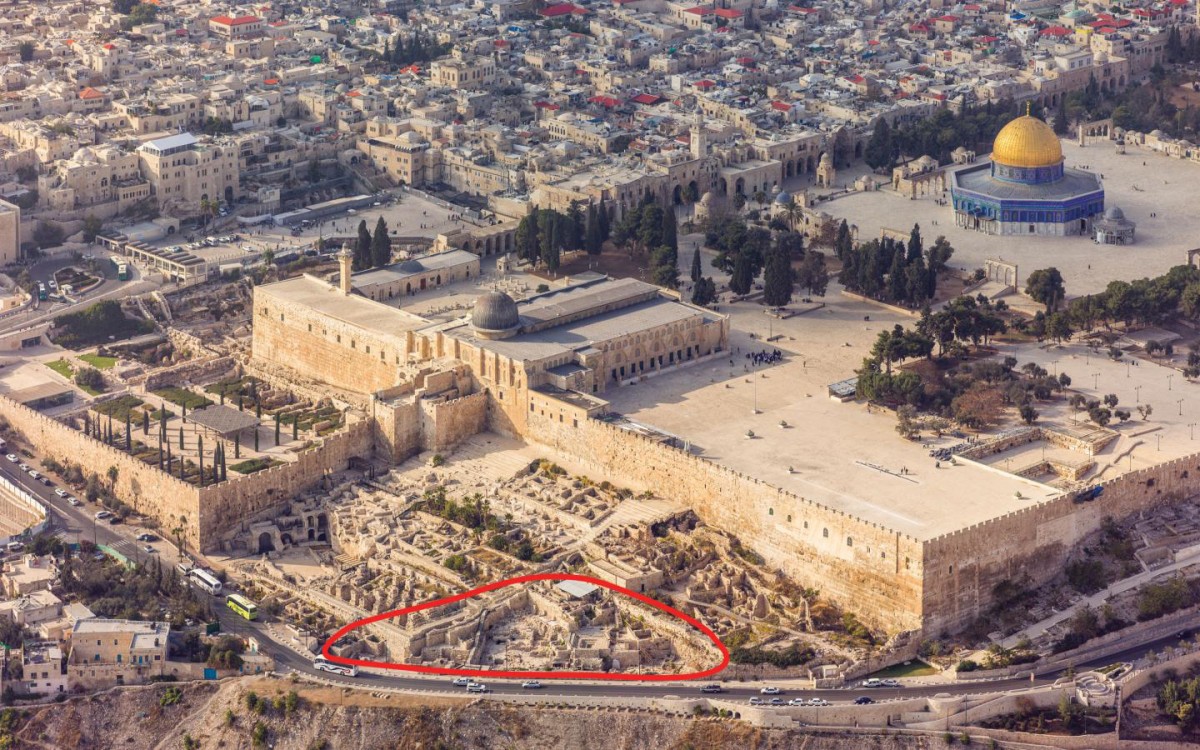 The Ophel excavations at the foot of the southern wall of the Temple Mount, conducted by the Hebrew University of Jerusalem’s Institute of Archaeology under the direction of Dr. Eilat Mazar, have unearthed an impression of the royal seal of King Hezekiah (727-698 BCE).

Measuring 9.7×8.6 mm, the oval impression was imprinted on a 3 mm thick soft bulla (piece of inscribed clay) measuring 13×12 mm. Around the impression is the depression left by the frame of the ring in which the seal was set.

The impression bears an inscription in ancient Hebrew script: “Belonging to Hezekiah [son of] Ahaz king of Judah,” and a two-winged sun, with wings turned downward, flanked by two ankh symbols symbolizing life.

The bulla originally sealed a document written on a papyrus rolled and tied with thin cords, which left their mark on the reverse of the bulla. This bulla came to light, together with many pottery sherds and other finds such as figurines and seals, in Area A of the excavations (2009 season), supervised by Hagai Cohen-Klonymus.

The bulla was discovered in a refuse dump dated to the time of King Hezekiah or shortly after, and originated in the Royal Building that stood next to it and appears to have been used to store foodstuffs. This building, one of a series of structures that also included a gatehouse and towers, was constructed in the second half of the 10th century BCE (the time of King Solomon) as part of the fortifications of the Ophel — the new governmental quarter that was built in the area that connects the City of David with the Temple Mount.

The bulla was found together with 33 additional bullae imprinted from other seals, some bearing Hebrew names, their reverse showing marks of coarse fabric and thick cords that probably sealed sacks containing foodstuffs.

Dr. Eilat Mazar said: “Although seal impressions bearing King Hezekiah’s name have already been known from the antiquities market since the middle of the 1990s, some with a winged scarab (dung beetle) symbol and others with a winged sun, this is the first time that a seal impression of an Israelite or Judean king has ever come to light in a scientific archaeological excavation.”

A third-generation archaeologist working at the Hebrew University’s Institute of Archaeology, Dr. Mazar directs excavations on the City of David’s summit and in the Ophel to the south of the Temple Mount’s southern wall. Among her many archaeological finds over the years, in 2013 she revealed to the world an ancient golden treasure discovered at the Ophel (see http://new.huji.ac.il/en/article/18251).

A video about this discovery is available online at http://www.keytodavidscity.com. Copyright Dr. Eilat Mazar and Herbert W. Armstrong College.

The renewed Ophel excavations (2009-2013), and the processing of the finds as well as the preservation and preparation of the excavated area for tourists by the Israel Antiquities Authority were made possible through funding provided by Daniel Mintz and Meredith Berkman (New York). The excavation site is situated within the Ophel Archaeological Park, which is part of the National Park Around the Walls of Jerusalem under the auspices of the Israel Nature and Parks Authority.

The seal impression was found during the wet-sifting of earth layers from the excavation in the Emek-Zurim wet-sifting facility, directed by Dr. Gabriel Barkai and Zachi Dvira, under the auspices of the Nature and Parks Authority and the Ir David Foundation. The bulla was discovered by Efrat Greenwald, a member of the Ophel expedition, who supervised the wet-sifting of the excavation material. Reut Ben-Aryeh, who prepared the Hebrew bullae from the Ophel excavations for publication, was the first to identify it as a seal impression of King Hezekiah. Students and alumni of Herbert W. Armstrong College from Edmond, Oklahoma participated in the excavation.

King Hezekiah is described favorably in the Bible (II Kings, Isaiah, II Chronicles) as well as in the chronicles of the Assyrian kings– Sargon II and his son Sennacherib — who ruled during his time. Hezekiah is depicted as both a resourceful and daring king, who centralized power in his hands. Although he was an Assyrian vassal, he successfully maintained the independent standing of the Judean Kingdom and its capital Jerusalem, which he enhanced economically, religiously, and diplomatically.

The Bible relates of Hezekiah that “there was none like him among all the kings of Judah after him, nor among those before him” (II Kings 18:5).

The symbols on the seal impression from the Ophel suggest that they were made late in his life, when both the Royal administrative authority and the King’s personal symbols changed from the winged scarab (dung beetle) — the symbol of power and rule that had been familiar throughout the Ancient Near East, to that of the winged sun — a motif that proclaimed God’s protection, which gave the regime its legitimacy and power, also widespread throughout the Ancient Near East and used by the Assyrian Kings.

This change most likely reflected both the Assyrian influence and Hezekiah’s desire to emphasize his political sovereignty, and Hezekiah’s own profound awareness of the powerful patronage given his reign by the God of Israel. While the changed Royal administrative symbol imprinted on the King’s jars used the motif of a sun with wings extended to the sides, Hezekiah’s personal changed symbol had a sun with sheltering wings turned down and a life-symbol at the end of each wing. This special addition of the symbol of life may support the assumption that the change on the King’s personal seal was made after Hezekiah had recovered from the life-threatening illness of shehin (II Kings 20:1-8), when the life-symbol became especially significant for him (ca. 704 BCE).

The discovery of King Hezekiah’s Royal Seal impression in the Ophel excavations vividly brings to life the Biblical narratives about King Hezekiah and the activity conducted during his lifetime in Jerusalem’s Royal Quarter.