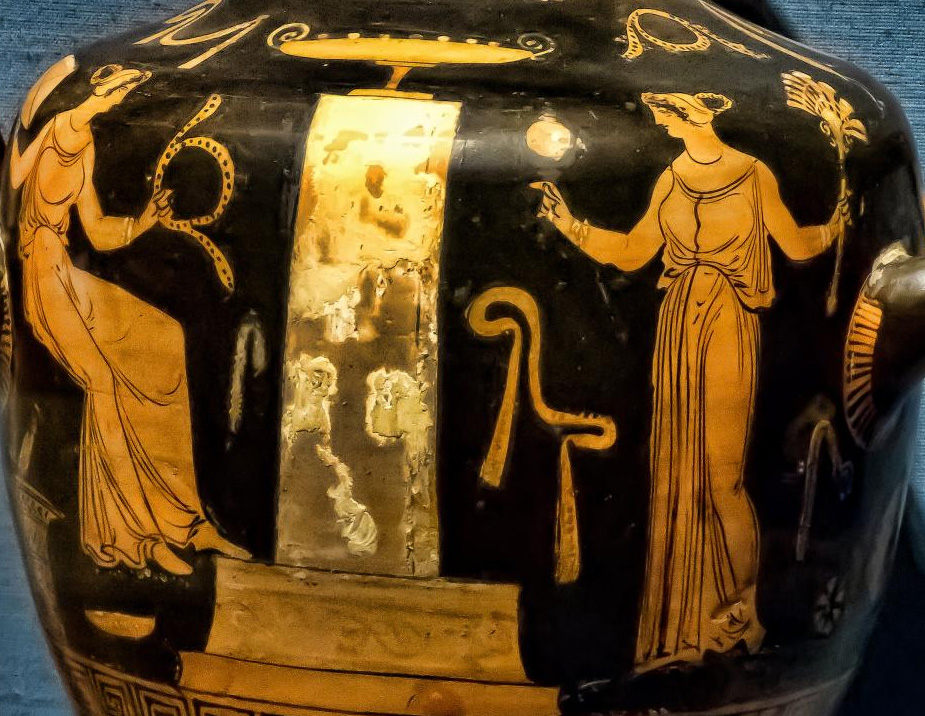 Ancient burial rituals prove you can take it with you…

and what you take says a lot

Death is inevitable, but what death shows us about the social behaviors of the living is not.

And recent University of Cincinnati research examining the ancient bereavement practices from the the Central Apulian region in pre-Roman Italy helps shed light on economic and social mobility, military service and even drinking customs in a culture that left no written history.

For instance, by focusing on the logistics of burials, treatment of deceased bodies and grave contents dating from about 525-200 BC, UC Classics doctoral student Bice Peruzzi found indication of strong social stratification and hierarchy. She also found indications of the commonality of military service since men’s tombs of the era routinely contained metal weaponry lying across or near the skeletal remains.

Another example: in the second half of the 4th century, an impressive increase in the number of tombs over a 50-year period indicates newer social groups gaining access to ceremonial burials that included use of the space by the living for a brief period of dancing and banqueting.

“After going through volumes of collected material, I realized that there was so much more that could be said about what was happening in the development of this particular culture,” says Peruzzi. “In spite of having no written history, I was able to distinguish three different periods and then connect them to the larger Mediterranean history to see how their society changed.”

She just presented her findings on these funerary practices in their broader historical context at the 2016 Archaeological Institute of America/Society for Classical Studies Annual Meeting in San Francisco.

Because a major Greek influence on this region had already existed, Preuzzi was not surprised to find valuable Greek vases and artifacts among the Apulian tomb contents from the 1st period (525-350). The finely detailed imagery on these vases often focused on women engaged in everyday activities such as courting, processions and wine offerings, which opened interesting questions about the role of women in those communities.

Other tomb contents ranged from wine cups and feasting sets to metal weaponry among the male tombs. And according to Peruzzi, the objects were chosen intentionally and purposefully placed during funerary rituals to project a personal message about the deceased’s role in the community.

Peruzzi also found remarkable evidence for tomb reuse. In a curious and calculated fashion, several tombs had been reopened showing older bones and artifacts pushed to the side to make way for a newer body and its contents, possibly creating a link between the present funeral and the memory of the past one.

“The care in displaying the artifacts in these tombs is striking, especially considering that the objects could have been visible only during the brief period when the tomb was open,” says Peruzzi. “This gives the impression that during Period 1 the tomb was conceived not only as the final resting place of the deceased, but almost as the stage for dancing and a burial performance.”

Throughout Period 2 (350-300), Peruzzi found that general trends in burial ceremony continued to focus around themes of banquet, war and women. But the increase in the number of tombs by this time strongly indicated that newer social groups were gaining access to this banquet-type funeral.

But much like in modern society, the elite now showed signs of breaking away from former trends to distinguish themselves from the general population. Items inside their tombs now included many new large Apulian red figure vases with generic iconography and repetitive designs.

“In this period we also find occasional assemblages containing very large vases with sophisticated iconographies that portray Greek tragedies,” says Peruzzi. “Scholars attribute this shift in taste to Greek influence, in particular the fascination with the military victories of Alexander the Great.

“The new growth of specific burial sites to the detriment of others in addition to newly constructed walls surrounding the communities also indicates a general movement toward urbanization in Period 2.”

Now entering into an era of great transformation, Period 3 (300-200) began to shift from large numbers of individual tombs to larger chamber tombs — often containing whole families — with a new emphasis on elaborate funerary architecture around the tombs.

And as for grave site partying, not so much. The iconography of female beauty, happiness in the afterlife and piety toward the dead formerly found on vase designs had changed.

Instead, grave goods now contained bottomless, undecorated ceramics were created simply to be symbolic of the older communal feasting. And metal weaponry was now replaced by a small number of fibulae, hairpins and other personal ornaments.

“By looking at artifacts in their archaeological and social context, I was able to illustrate changes never before recognized,” says Peruzzi. ” From the emergence of new social groups at the end of the 6th century B.C. to the gradual urbanization and separation of “ethnic” groups during the 3rd century B.C., the evolution of funerary practices can be successfully used to highlight major transformations in the social organization of Central Apulia communities.”