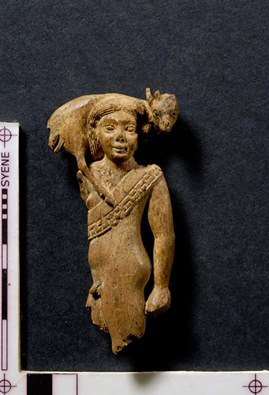 Egypt’s Embassy in Berlin has received an ivory statuette that dates back to the 7th or 8th century BC as a first step to repatriate it to its place of origin. The statuette was smuggled out of Egypt in 2013 as a result of the state of insecurity that followed the 25th of January Revolution, stated Dr. Eldamaty, Minister of Antiquities.

General Supervisor of the Repatriated Antiquities Department, Sha’ban Abdel-Gawad added that the Antiquities Ministry in collaboration with the Egyptian Ministry of Foreign Affairs and other authorities managed to stop the sale of the statuette after it was seen displayed in the Aton Gallery in Germany. The 4.8cm statuette, added Abdel-Gawad, was stolen from an antiquities storage room in Aswan and it depicts a standing man holding a deer or gazelle over his shoulders.