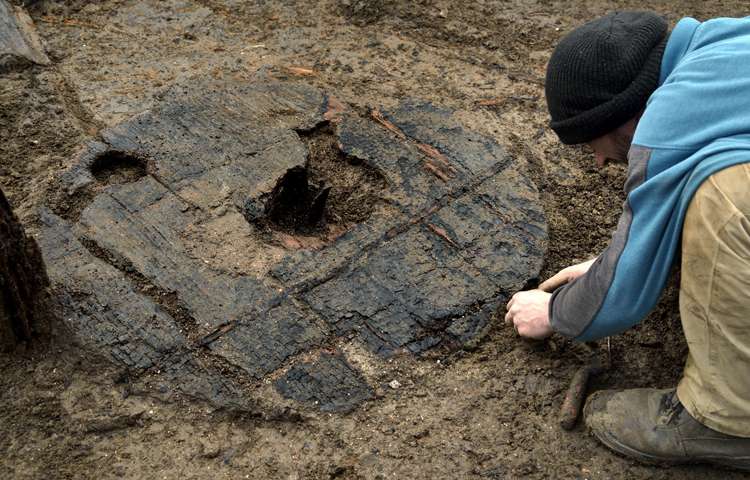 At Must Farm near Peterborough

The largest and best-preserved Bronze Age wheel in Britain has been uncovered at Must Farm, a site described as Peterborough’s Pompeii. The wheel will extend our understanding of early technologies and transport systems.

Archaeologists working at Must Farm, a Bronze Age site near Peterborough, have uncovered a 3,000-year-old wheel, the first and largest complete example ever to be discovered in Britain.

The find, which will broaden our understanding of Late Bronze Age life, is the latest from a settlement described as Peterborough’s Pompeii. The large wooden round houses, built on stilts, plunged into a river after a dramatic fire 3,000 years ago.

Thought to date from 1100-800 BC, the ancient wooden wheel is one metre in diameter and has been so well preserved by the silt that it still contains its hub. An incomplete Bronze Age wheel was found nearby at Flag Fen in the 1990s but the Must Farm find is unprecedented in terms of size and completeness.

The discovery poses challenges to what is known about the Late Bronze Age in terms of the technology available 3,000 years ago.

Duncan Wilson, Chief Executive of Historic England, said: “This remarkable but fragile wooden wheel is the earliest complete example ever found in Britain. The existence of this wheel expands our understanding of Late Bronze Age technology and the level of sophistication of the lives of people living on the edge of the Fens 3,000 years ago.”

The find is the latest in a series of discoveries at the Must Farm site which is providing an extraordinary insight into domestic life 3,000 years ago.  Excavation has already revealed circular wooden houses believed to be the best–preserved Bronze Age dwellings ever found in Britain.

The large wheel was unearthed just a few metres away from the biggest round house on the site. Other exciting finds include a wooden platter, small wooden box and rare small bowls and jars with food remains inside, as well as exceptional textiles and Bronze Age tools. After a catastrophic fire, the houses collapsed into a slow-moving and silty river, which preserved their contents in amazing detail.

David Gibson, Archaeological Manager at the Cambridge Archaeological Unit, Division of Archaeology, University of Cambridge, said: “The discovery of the wheel demonstrates that the inhabitants of this watery landscape had links to the dry land beyond the river.”

The Must Farm site is located at a quarry run by Forterra. Brian Chapman, Head of Land and Mineral Resources, said: “This is an incredible project which we are delighted to be part of. We understand that the discovery of the wheel is of national importance. We are committed to helping uncover the remaining secrets of this unique site at Must Farm and look forward to working with our partners over the coming months.”

Kasia Gdaniec, Senior Archaeologist for Cambridgeshire County Council, said: “Among the wealth of other fabulous artefacts and the new structural remains of round houses built over this river channel, this site continues to amaze and astonish us with its insight into prehistoric life, the latest being the discovery of this wooden wheel.  Believed to be the most complete example yet found from this period, this wheel poses a challenge to our understanding of both Late Bronze Age technological skill and, together with the eight boats recovered from the same river in 2011, transportation.”

Historic England (formerly known as English Heritage) and building products supplier Forterra are funding a major £1.1 million project to excavate 1,100 square metres of the Must Farm quarry site in Cambridgeshire. The Cambridge Archaeological Unit, Division of Archaeology, University of Cambridge is over half way through the excavation which is taking place because of concerns about the location and future preservation of the site.

The remains cannot be preserved indefinitely in situ and need to be recorded and analysed so that the unique site of Must Farm can expand our knowledge of the Bronze Age.

Once the excavation is finished, the team will take the finds for further analysis and conservation. Eventually, the objects will be displayed at Peterborough Museum, Flag Fen and at other local venues. The end of the four-year project will see a major publication about Must Farm and an online resource detailing the finds.

The oldest Bronze Age wheel in Britain is the Flag Fen wheel which dates to c1300 BC but is incomplete and is smaller at 0.8m in diameter. Part of a Late Bronze Age wooden wheel is also known from Lingwood Fen near Cottenham in Cambridgeshire. In Europe, the earliest wheels date to at least 2,500 BC, in the Copper Age.

The Must Farm site is close to modern-day Whittlesey, Cambridgeshire, and sits astride a prehistoric watercourse inside the Flag Fen basin. The site has produced large quantities of Bronze Age metalwork, including a rapier and sword in 1969, and more recently the discovery of eight well-preserved log boats in 2011.

These finds place Must Farm alongside similar European Prehistoric Wetland sites: the ancient loch-side dwellings known as crannogs in Scotland and Ireland; stilt houses, also known as pile dwellings, around the Alpine Lakes; and the terps of Friesland, man-made hill dwellings in the Netherlands.