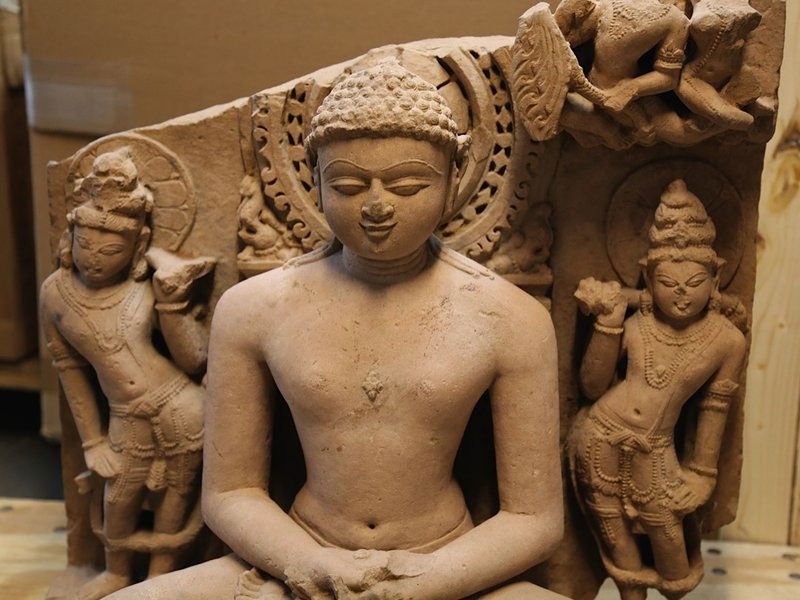 Ahead of Asia Week New York

Special agents with U.S. Immigration and Customs Enforcement’s (ICE) Homeland Security Investigations (HSI) in conjunction with the Manhattan District Attorney’s Office seized two stolen Indian statues earlier this month, believed to be from the 8th and 10th centuries AD. The artifacts were recovered from Christie’s auction house in New York City and are the result of an international investigation led by HSI and the Manhattan District Attorney’s Office, with assistance from the government of India and Interpol.

The seizure comes just days before the planned March 15, 2016 auction of the items as part of the “Asia Week New York” festivities. Christie’s had included the two artifacts in an auction entitled: “The Lahiri Collection: Indian and Himalayan Art, Ancient and Modern.”

The two artifacts listed in the auction as lots 61 and 62 are described as:

a) A Buff Sandstone Stele of Rishabhanata, from Rajasthan or Madhya Pradesh, India, in the 10th century AD, approximately 22 3/8 inches high, and depicting a stele carved with the first Jain Tirthankara (a teacher who preaches dharma) seated in vajrasana (crossed leg pose) and flanked by a pair of standing attendants, and valued at approximately $150,000.
b) A Buff Sandstone Panel Depicting Revanta and His Entourage, from India, in the 8th century AD, approximately 30 by 53 inches, depicting a very rare representation of the equestrian deity, Revanta, a figure of great importance in Hinduism, and valued at approximately $300,000.

According to the ongoing investigation, the Sandstone of Rishbhanata appears to have been sold by Oliver Forge to London–based Brandon Lynch Ltd between 2006-2007. The Panel of Revanta, according to images provided by the source dealer, appeared to have contained an “orphan fragment,” a piece perfectly broken off to be sold by the smugglers after the sale of the main part of the sculpture.

“This seizure at the beginning of an international event as well recognized as Asia Week New York sends two important messages: First and foremost, it demonstrates that we are committed to protecting cultural heritage around the world and second, it demonstrates that we are monitoring the market to protect prospective buyers as well,” said Angel M. Melendez, special agent in charge of HSI New York.

HSI special agents were able to determine that both of these artifacts had come from a specific smuggler and supplier of illicit cultural property in India. HSI special agents have tracked many false provenances and this has been one of the pillars of Operation Hidden Idol. This methodology of back-tracking an artifact has led to numerous recoveries.

“Every year, fine art collectors from around the world flock to New York for Asia Week, where they spent a reported $360 million last year on Asian antiquities and art,” said Manhattan District Attorney Cyrus R. Vance, Jr. “With high demand from all corners of the globe, collectors must be certain of provenance before purchasing. I urge dealers and auction houses to take every necessary precaution to avoid facilitating the sale of cultural heritage stolen from other civilizations. If a provenance is in doubt, report it to law enforcement authorities.”

Over the past four years, the Manhattan DA’s Office and HSI New York have partnered on Operation Hidden Idol, focusing on activities surrounding the illicit cultural property trade in New York. The investigation has also identified Subhash Kapoor, who is currently in custody in India awaiting trial for allegedly looting tens of millions of dollars’ worth of rare antiquities from several nations. The trails of looted artifacts have been traced all around the world. Within the past twelve months, four domestic museums and one major collector have partnered with HSI to surrender illicit cultural property stemming from Kapoor. To date, HSI special agents, in conjunction with the Manhattan DA’s Office, have netted in excess of 2,500 artifacts worth over an estimated $100,000,000.00. These artifacts stem from countries all around the world. Additionally, four individuals have been arrested in the U.S. for their role in the scheme.

“I would like to convey my deep sense of appreciation to HSI for the exceptional work done in locating and retrieving the sculptures brought into the United States by organized crime syndicates,” said Ambassador Riva Ganguly Das, Consul General of India. “My congratulations to all of the special agents of HSI New York, who have painstakingly and diligently undertaken these complex and time consuming investigations.”

HSI plays a leading role in criminal investigations that involve illegally importing and distributing cultural property, including illicit trafficking of cultural property, especially objects that have been reported lost or stolen. HSI International Operations, through its 64 attaché offices in 46 countries, works closely with foreign governments to conduct joint investigations, when possible.

HSI’s specially trained investigators assigned to both domestic and international offices, partner with governments, agencies and experts to protect cultural antiquities. They also provide cultural property investigative training to law enforcement partners for crimes involving stolen property and art, and how to best enforce the law to recover these items when they emerge in the marketplace.

Since 2007, more than 8,000 artifacts have been returned to 30 countries, including paintings from France, Germany, Poland and Austria; 15th to 18th century manuscripts from Italy and Peru; as well as cultural artifacts from China, Cambodia and Iraq.