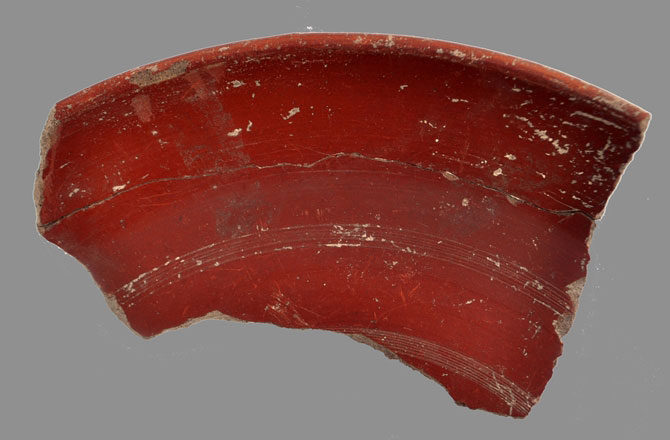 At a dump-site near Naples

A site near Naples with cookware fragments has been found, containing pans coated with a substance to prevent food from sticking to the pan bottom. In particular, the predecessor of the modern anti-stick frying pan was produced more than 2,000 years ago. The pans originated in the city of Cumae, and were therefore known as “Cumanae testae” or “Cumanae patellae”. The reference is from a first-century cookbook, De Re Coquinaria, where the pans are described as most suitable for making chicken stews.

Although the discovery was made decades ago, it wasn’t until 1975 that the assumption of the pans’ use was made, by Giuseppe Pucci, archaeologist and professor of history of Greek and Roman art. He proposed that a pottery commonly known as Pompeian Red Ware which featured a heavy red-slip coating in the inside, was the “Cumanae testae” from historical sources.

Now, however, with the discovery of the dump site, archaeologists Marco Ciglio, Giovanni Borriello and Stefano Iavarone, at the University of Naples “L’Orientale,” have found evidence in Cumae to support Pucci’s identification. They discovered more than 50,000 fragments of lids, pots and pans of various sizes and thickness. The fragments were probably defective artefacts produced in Cumae, many of them with the internal red-slip coating specially intended to prevent food sticking to the bottom of the pan. Archaeologists hope that the numbered fragments will offer them the opportunity to recreate the way the pans were manufactured. The fragments unearthed at the dumping site date to the rule of emperors Augustus and Tiberius, between 27 B.C. and 37 A.D.

Cumae, a city about 12 miles west of Naples, probably produced the cookware in question en mass and exported them accross the Mediterranean, from Spain to North Africa, France, Germany and Great Britain.

The clay mixture used to produce the pans and pots in Cumae was different than the one found in Pompeii, where Red-Ware anti-adhesive coating was of much lower quality.