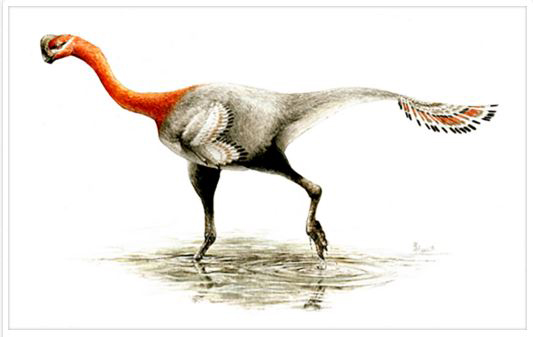 Solving one of the longest cases of mistaken identity, University of Alberta PhD candidate Greg Funston recently described a new genus and species of toothless dinosaur from Alberta. Long thought to be a more common ornithomimid, Apatoraptor pennatus instead turned out to be a member of the notoriously enigmatic caenagnathid family.

“This is my first time naming a new dinosaur,” says Funston of the prestigious honour. “It’s really exciting on a personal level, but what I am most excited about is what it means for this field of paleontology. In future studies, it will help us to better understand these dinosaurs. It’s a really important specimen.”

The mostly complete skeleton was found in 1993, but because it was believed to be a more common ornithomimid, it sat on a shelf at the Royal Tyrrell Museum for 15 years before it was finally prepared for the museum’s 25th anniversary. The mistaken identity laid the foundation for its name, meaning “deceptive thief.”

“Because it is a relatively complete skeleton, it helps resolve the relationships of caenagnathids, which have always been problematic,” notes Funston. “Most caenagnathids are represented by isolated material or single bones, which means that we can’t tell if they came from the same animal. Apatoraptor gives us a better idea of what these animals looked like, which tells us if the features we’ve been using to separate species are significant or not.”

With such a beautifully preserved fossil, the scientists were able to use CT scanning technology to fully examine the bones. They were surprised to find pits on an arm bone corresponding with feather scars. “These feather scars suggest that Apatoraptor had a wing of feathers on its arms, although it couldn’t have used these wings to fly,” says Funston. Instead, he explains, the wings were likely used for sexual display to attract mates.

“Oviraptorosaurs, the bigger group to which Apatoraptor and other caenagnathids belong, were probably some of the flashiest dinosaurs. We know of three separate ways—head crests, tail feathers and now arm feathers—that they would display to their mates.”

Funston worked on the findings with his supervisor, world-renowned paleontologist Philip Currie, professor at the University of Alberta and Canada Research Chair in Dinosaur Paleobiology. He worked with his fellow grad student, paleoartist Sydney Mohr, on the life reconstruction. Mohr used modern birds as inspiration for the colouring.

“A new caenagnathid (Dinosauria: Oviraptorosauria) from the Horseshoe Canyon Formation of Alberta, Canada, and a reevaluation of the relationships of Caenagnathidae” appears in the April 14 edition of the Journal of Vertebrate Paleontology.