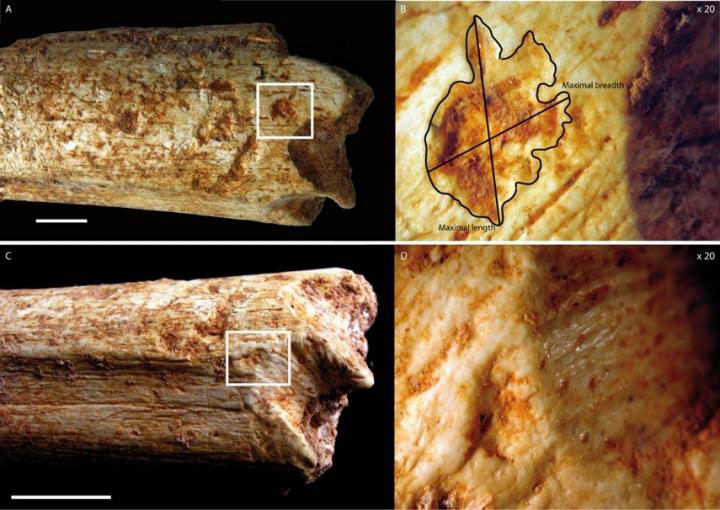 Hominins may have been food for carnivores 500,000 years ago

Tooth-marks on a 500,000-year-old hominin femur bone found in a Moroccan cave indicate that it was consumed by large carnivores, likely hyenas, according to a study published April 27, 2016 in the open-access journal PLOS ONE by Camille Daujeard from the Muséum National D’Histoire Naturelle, France, and colleagues.

During the Middle Pleistocene, early humans likely competed for space and resources with large carnivores, who occupied many of the same areas. However, to date, little evidence for direct interaction between them in this period has been found. The authors of the present study examined the shaft of a femur from the skeleton of a 500,000-year-old hominin, found in the Moroccan cave “Grotte à Hominidés” cave near Casablanca, Morocco, and found evidence of consumption by large carnivores.

The authors’ examination of the bone fragment revealed various fractures and tooth marks indicative of carnivore chewing, including tooth pits as well as other scores and notches. These were clustered at the two ends of the femur, the softer parts of the bone being completely crushed. The marks were covered with sediment, suggesting that they were very old.

While the appearance of the marks indicated that they were most likely made by hyenas shortly after death, it was not possible to conclude whether the bone had been eaten as a result of predation on the hominin or had been scavenged soon after death. Nonetheless, this is the first evidence that humans were a resource for carnivores during the Middle Pleistocene in this part of Morocco, and contrasts with evidence from nearby sites that humans themselves hunted and ate carnivores. The authors suggest that depending on circumstances, hominins at this time could have both acted as hunter or scavenger, and been targeted as carrion or prey.

Camille Daujeard notes: “Although encounters and confrontations between archaic humans and large predators of this time period in North Africa must have been common, the discovery … is one of the few examples where hominin consumption by carnivores is proven.”