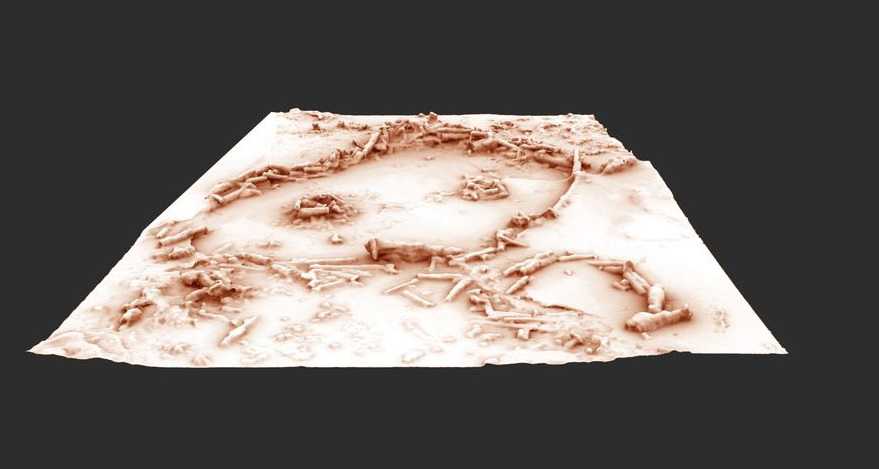 Deep inside Bruniquel Cave, in the Tarn et Garonne region of southwestern France, a set of man-made structures 336 meters from the entrance was recently dated as being approximately 176,500 years old.

This discovery indicates that humans began occupying caves much earlier than previously thought: until now the oldest formally proven cave use dated back only 38,000 years (Chauvet). It also ranks the Bruniquel structures among the very first in human history. In addition, traces of fire show that the early Neanderthals, well before Homo sapiens, knew how to use fire to circulate in enclosed spaces far from daylight. The research, reported in the 25 May 2016 issue of Nature, was conducted by an international team including Jacques Jaubert from the University of Bordeaux, Sophie Verheyden from the Royal Belgian Institute of Natural Sciences (RBINS) and Dominique Genty of the CNRS, with logistical support from the Société Spéléo-Archéologique de Caussade under president Michel Soulier and the backing of the French Ministry of Culture and Communication.

Bruniquel Cave was discovered in 1990 on a site overlooking the Aveyron Valley. The team of speleologists in charge of its management has kept the site in pristine condition, preserving its numerous natural formations (an underground lake, calcite rafts, translucent flowstone, concretions of all types…), intact floors containing numerous bone remains and dozens of bear hibernation hollows with impressive claw marks. But most importantly, the cave contains original structures made up of about 400 stalagmites or sections of stalagmites, gathered and arranged in more or less circular formations. These circles show signs of fire use: calcite reddened or blackened by soot and fractured by heat, as well as burnt matter including bone remnants. In 1995, a first team of speleologists and researchers used carbon 14 to date a burnt bone at 47,600 years (the oldest possible date using that technique), but no further dating was carried out at that time.

In 2013 a team of researchers, with the backing of the DRAC Midi Pyrénées regional archaeological department, launched a new program of studies and analyses. In addition to a 3D survey of the stalagmite structures and an inventory of their constituent elements, a magnetic study was used to reveal anomalies caused by heat, making it possible to map the burnt remnants found in this part of the cave. It seems most plausible that these fires were simply used as light sources.

Since no other stalagmite structure of this scale has yet been discovered, the team developed a new concept to designate these carefully arranged pieces of stalagmites: “speleofacts.” An inventory of the cave’s 400 speleofacts reveals a total of 112 meters of stalagmites broken into well-calibrated pieces, weighing an estimated 2.2 metric tons. The components of the structures are aligned, juxtaposed and superimposed (in two, three and even four layers), with props around the outside, apparently to hold them in place, and filler pieces. Marks left by the wrenching of stalagmites from the cave floor to make the structures have been identified nearby.

No remains were found in the cave floors that could help date the installation: a thick crust of calcite has coated the structures, sealing them in place and concealing the original floor. For this reason, the researchers, with the help of colleagues from the University of Xi’an (China) and the University of Minnesota (US), used a method called uranium series dating (U-Th), based on the radioactive properties of uranium, trace amounts of which are omnipresent in the environment. When stalagmites are formed, uranium is present in the calcite. Over time it breaks down into other elements, including thorium (Th). The age of a stalagmite can therefore be determined by measuring the thorium and remaining uranium in the calcite.

The Neanderthals made these structures by breaking stalagmites and rearranging the pieces. After the site was abandoned, new layers of calcite, including new stalagmite growth, formed on the man-made structures. By dating the end of the growth of the stalagmites used in the structures and the beginning of the regrowth sealing those same structures, the researchers have estimated the age of the installation at 176,500 years, ± 2,000 years. Additional samples, in particular of the calcite covering a burnt bone, confirmed this surprising result.

Were the first Neanderthals explorers and builders?

The very existence of these structures, virtually unique in the annals of archaeology, was already an astonishing discovery. In Prehistory, it wasn’t until the beginning of the recent Paleolithic in Europe, plus some isolated cases in Southeast Asia and Australia, that man was known to make regular incursions into the underground world, beyond the reach of sunlight. The proof is nearly always drawings, engravings and paintings, like those found in the caves of Chauvet (-36,000 years), Lascaux (-22,000 to -20,000 years), Altamira in Spain and Niaux (-18,000 to -15,000 years for both sites) and, more rarely, burial sites (Cussac Cave in France’s Dordogne region: -28,500 years). But the Bruniquel stalagmite structures were built long before modern humans arrived in Europe (-40,000 years). Their creators must therefore have been the first Neanderthals so far presumed by the scientific community not to have ventured far underground, nor to have mastered such sophisticated use of lighting and fire, let alone to have built such elaborate constructions.

New questions about the Neanderthals

We now know that, some 140 millennia before the arrival of modern man, Europe’s first Neanderthals were occupying deep caves, building complex structures and maintaining fires in them. The Bruniquel structures are of particular interest due to their distance from the mouth of the cave, which is thought to be the same now as in the days of the Neanderthals. The researchers also wonder what the function of these installations, so far from daylight, could have been. Eliminating the unlikely hypothesis of shelter, given the structures’ distance from the entrance, was it to find materials of now-unknown utility? Could it have been for “technical” purposes, such as water storage? Or for the observance of religious or other rites? In any case, the researchers confirm that the Neanderthals had to have an advanced social organization to build such constructions. Further studies will attempt to explain their function, which for the moment remains the biggest mystery surrounding Bruniquel Cave.