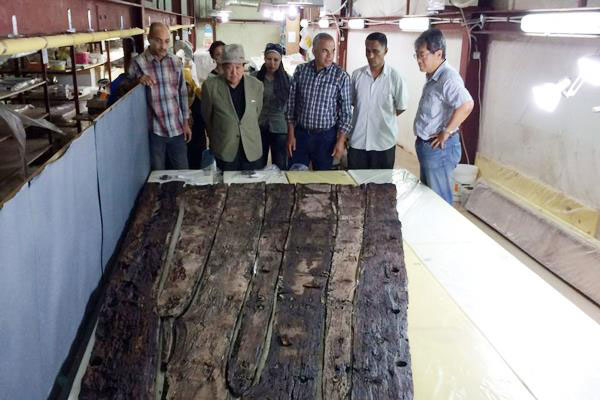 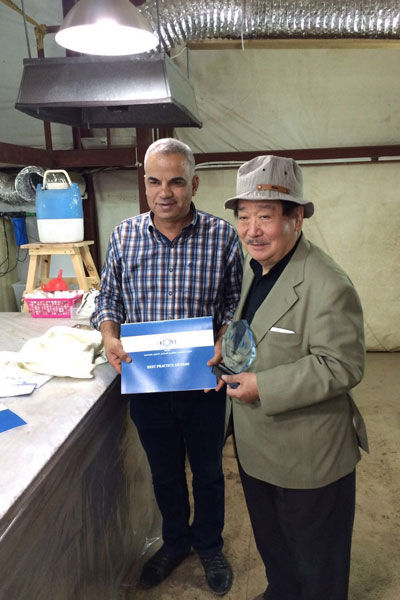 Probably from the captain's shrine

Restorers of Pharaoh Khufu’s second solar boat have found timber probably beams comprising the floors of the shrine of the captain’s boat.

The timber was found inside the tip at the Giza Plateau, located beside the Great Pyramid of Khufu. The pit was discovered next to another one in 1954 on the southern side of the Great Pyramid.

The first pit was covered by 41 limestone slabs, under which there was a cedar boat. The boat was dismantled but timber was placed in a way as if it was properly assembled and finished. Other items were also found, such as small pieces of white plaster, oars, poles, cylindrical columns and doors. Restorer Ahmed Youssef supervised the restoration of the boat which is now on display at Khufu’s Solar Boat Museum on the Giza Plateau.

The second boat in the adjacent pit remained sealed up until 1987, when a hole was made into the limestone plates covering the boat and a micro-camera and measuring equipment were inserted. Then the pit was resealed and it was in 2009 when a  Japanese team from Waseda University headed by Sakuji Yoshimura cleaned the pit of insects and constructed a hanger to protect the timber while it was being treated in situ before it was taken to the museum lab. Preliminary work was finished and in 2011 the Japanese-Egyptian team started uncovering the second boat and conducting restoration work.

Eissa Zidan, Restoration Department Head at the Egyptian Museum and Khufu boat restoration supervisor, said that so far restorers have removed 700 timbers from the pit.

According to Zidan Khufu’s boats had two shrines: one at the end of the boat, destined for the Pharaoh, and another at the front, for the captain. The shrine was documented and photographed with a 3D laser scanner aiming to help at reconstructing the boat.  The beams from the captain’s shrine have been transported to the Grand Egyptian Museum, after some in situ restoration work to protect them from disintegrating. The pieces had been removed piece by piece, treated with a special chemical to protect them from the atmosphere and taken to the lab where they were subjected to reduction of humidity and consolidation.

Restorers are continuing their work so as to remove all the beams from the pit and after reconstruction put the second solar boat on display next to the first one.

The restoration project was one of the two that won, along with a museum, the 2016 Best Practice Award from the Egyptian National Committee of the ICOM (International Council of Museums).