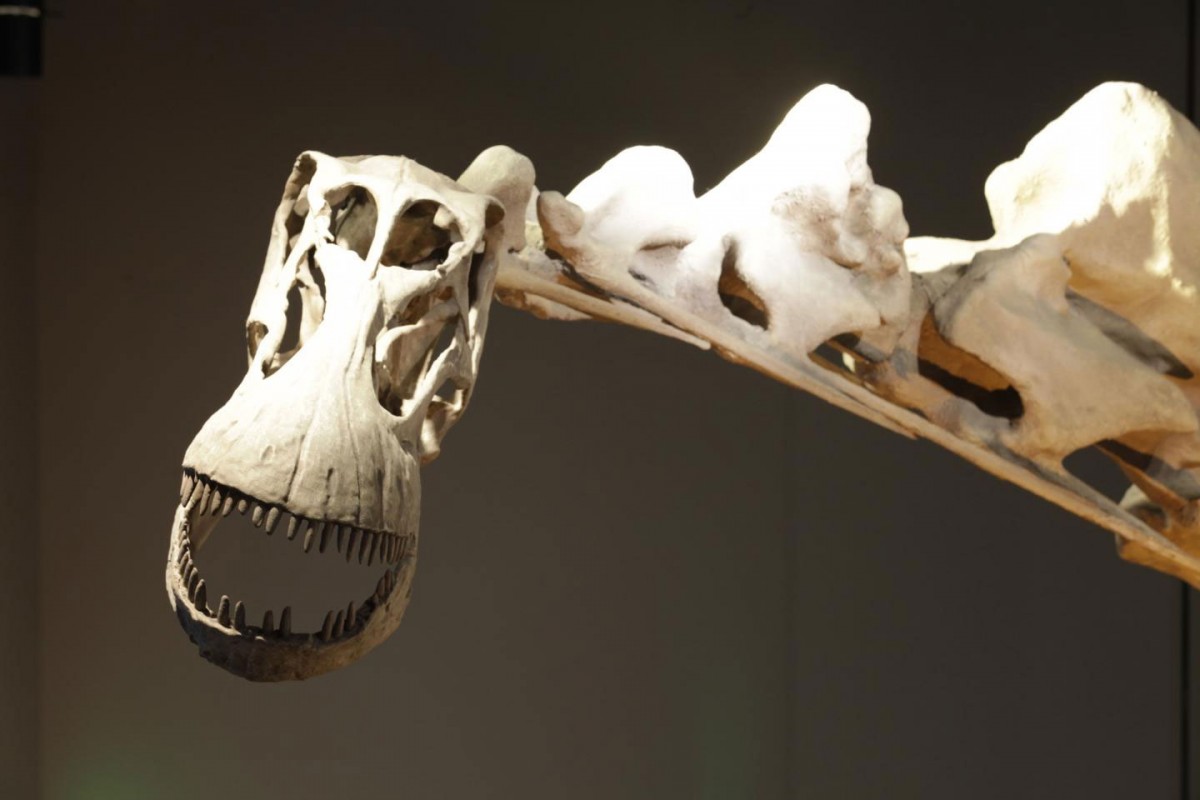 Paleontologists from the Perot Museum of Nature and Science in Dallas have co-authored a scientific paper entitled “An articulated cervical series of Alamosaurus sanjuanensis Gilmore, 1922 (Dinosauria, Sauropoda) from Texas: new perspective on the relationships of North America’s last giant sauropod.”

“Giant sauropods like Alamosaurus have amazed people since the 1800s. Their sheer size boggles the mind, and they have forced scientists to re-think the physical limits of land-living animals,” said Tykoski. “The fossils described in our paper reveal new details about the last sauropods in North America, which helps us better understand who Alamosaurus was related to and how this species made it to southern North America by 67 to 66 million years ago – just in time to go extinct at the end of the Cretaceous!”

The name Alamosaurus came from the Ojo Alamo trading post and geological formation in New Mexico from which the first bones of the species were found (not after the historic battle in San Antonio, Texas in 1836). The name of the trading post stemmed from the Spanish word for a huge cottonwood tree growing at the trading post. Alamosaurus was a titanosaur sauropod, one of the groups of long-necked and long-tailed dinosaurs that included the largest animals to walk the Earth.

The discovery of the massive bones came in 1997 when a joint field crew from the University of Texas at Dallas (UT-D) and the Perot Museum (known at that time as the Dallas Museum of Natural History) was working in the northeast section of Big Bend National Park. The scientists and volunteers were excavating a site that produced parts of several immature sauropods when Dana Biasatti, then a student at UT-D, “stretched her legs” and came upon the remarkable remains of an adult titanosaur a few hundred yards away. The team was stunned. The nine cervical (neck) vertebrae were the first articulated series of adult Alamosaurus neck bones ever found. The fossils of Alamosaurus from Big Bend National Park currently represent the biggest dinosaurs discovered in Texas.

“It was one of those days one doesn’t ever forget. The part of the animal that was exposed at the surface was the hip region. Probing around the site resulted in the discovery of this incredible neck,” said Fiorillo. “One of the intriguing aspects of this project is that for us to better understand this dinosaur in our home state, we had to also rely, in part, on the results of the scientific work the Perot Museum has been doing in Arctic Alaska over the same window of time.”

Four years later – after gaining the full cooperation and necessary permits from the National Park Service and lining up Bell Helicopter to help transport the fossils (at no cost) from the remote wilderness site – the Perot Museum and UT-D team returned to the West Texas site for their top-secret mission to recover the adult sauropod bones.

For eight mostly hot and dusty days in early May 2001, they gingerly dug out the vertebrae, then hauled almost 3,000 lbs. of plaster, wood, burlap and water on their backs to create the jackets protecting the huge bones. On the final day, the field team, along with excited members of the National Park Service and other spectators, nervously watched as the helicopter gently lifted the plaster jackets – some weighing a half of a ton or more – from the excavation site. Dangling from the chopper about 50 feet above ground, the precious cargo was slowly transported to a flatbed truck about a mile away. Once packed and safely secured, the jackets began their 550-mile journey to the Perot Museum paleo lab at Fair Park in Dallas where they’d undergo years of fossil preparation work.

“This remarkable discovery illustrates the importance of America’s public lands as places where scientists have access to perform research that benefits everyone,” said Cindy Ott-Jones, Superintendent of Big Bend National Park. “While Big Bend National Park is a place that many people enjoy for its scenery and recreational opportunities, visitors should know that a tremendous amount of scientific research is also performed in the park.”

Today, visitors can view the actual fossilized neck bones from Big Bend at the Perot Museum of Nature and Science, which opened in December 2012 near downtown Dallas. The enormous bones served as the inspiration for the centerpiece for the Museum’s T. Boone Pickens Life Then and Now Hall, a fully assembled skeleton of the Alamosaurus standing 25 feet tall and stretching more than the length of two school buses, dwarfing a Tyrannosaurus rex standing next to it. Laser digitization and 3D printing were used to create lightweight replicas of the Perot Museum’s dinosaur’s neck, along with portions of the body obtained from another skeleton at the University of Texas at Austin, and tail and leg bones in the collections of the Smithsonian Institution in Washington, D.C. A crowd favorite, the breathtaking cast was fabricated and mounted by Research Casting International of Ontario, and it remains the only rendition of a complete Alamosaurus skeleton on exhibit anywhere in the world.

Once the decision was made in 2009 to feature the Alamosaurus at the new facility, Tykoski recalls it was a three-year Herculean effort to get the vertebrae ready for the Museum’s debut. Extra staff and more than two dozen volunteers worked thousands of hours meticulously whittling away 66 million years of sediment that entombed the dinosaur bones.

Both of the Perot Museum’s paleontologists credit the success of the 19-year initiative to the numerous partners who collaborated and cooperated from start to finish.

“The paper is just the culmination of almost two decades of hard work and incredible collaboration and partnerships between so many agencies and institutions,” said Tykoski. “From people at UT-D, Big Bend National Park, Bell Helicopter, the Smithsonian Institution, the Vertebrate Paleontology Lab at UT-Austin, the dedicated staff and volunteers at the Perot Museum, and other paleontologists who offered advice and insight about these animals, so many people contributed to getting the science done and the information out there for the world to see.”

“This was such an incredible find, and we were able to work with so many people to help us reach a successful conclusion. I guess, at some level, everyone reverted back to their childhood awe of giant dinosaurs,” added Fiorillo.

The findings of the Perot Museum of Nature and Science research team are now available online as an open access article at the Journal of Systematic Palaeontology website and will appear in its forthcoming January/February 2017 print edition. The lead author is Ronald S. Tykoski, Ph.D., the Perot Museum’s Director of Paleontology Lab, and the co-author is Anthony R. Fiorillo, Ph.D., the Perot Museum’s Chief Curator and Vice President of Research and Collections. To view the article, go to http://www.tandfonline.com/doi/full/10.1080/14772019.2016.1183150.