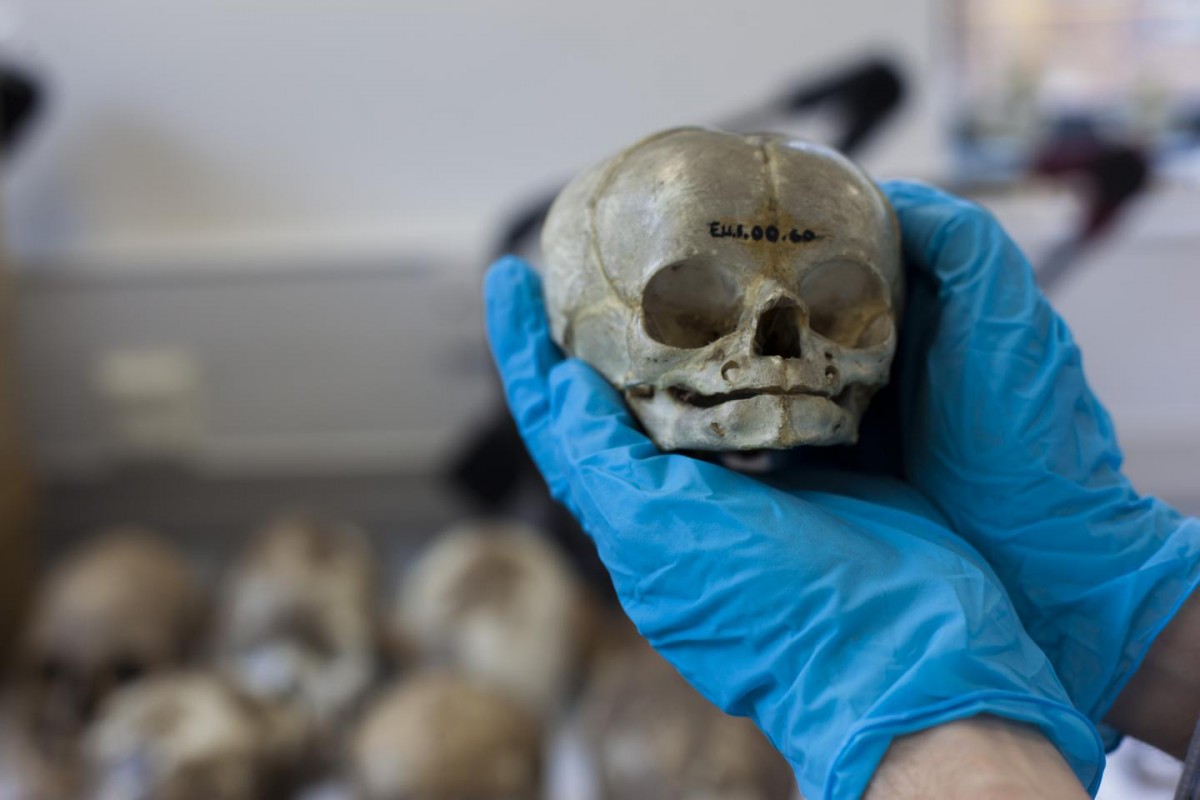 A new study of the University of Cambridge anatomy collection suggests that the bodies of foetuses and babies were a “prized source of knowledge” by British scientists of the 18th and 19th centuries, and were dissected more commonly than previously thought and quite differently to adult cadavers.

Historical research combined with the archaeological assessment of collection specimens shows that foetus and infant cadavers were valued for the study of growth and development, and were often kept in anatomical museums.

Researchers say that socio-cultural factors and changes in the law, as well as the spread of infectious disease during the industrial revolution, dictated the availability of these small bodies for dissection.

The study, conducted by Jenna Dittmar and Piers Mitchell from Cambridge’s Department of Archaeology and Anthropology, is the first to look specifically at how British scientists investigated the changing anatomy of childhood during the 1800s. The findings are published on June 30, 2016, in the Journal of Anatomy.

The researchers undertook studies of the skeletal collection retained from the former dissecting room of Cambridge’s department of anatomy, with specimen dates ranging from 1768 to 1913.

While the bodies of adults typically underwent a craniotomy – opening of the top of the skull using a saw – the researchers found that anatomists generally kept the skulls of foetuses and young children in one piece. From a total of 54 foetal and infant specimens in the collection, just one had undergone a craniotomy.

Careful study of the bone surface revealed that soft tissues had been gently removed using knives and brushes in order to preserve as much of the bones of the head as possible, although surgical instruments would have been similar to those used on the fully-grown. Tools for other purposes in adults, such as ‘bone nipper’ forceps, were likely used for dividing diminutive ribcages.

The research suggests that anatomists kept the skeletal remains of foetuses and infants for further study and use as teaching aids, whereas adults were frequently reburied after dissection.

“Foetal and infant bodies were clearly valued by anatomists, illustrated by the measures taken to preserve the remains intact and undamaged,” says Dittmar.

“The skulls appear to have been intentionally spared to preserve them for teaching or display. This may explain why so few children with signs of dissection on their bones have been recovered from the burial grounds of hospitals or parish churches, compared with adults.”

Literature from the late 18th century shows that the size of infant bodies made them preferable for certain “anatomical preparations” in teaching, particularly for illuminating the anatomy of the nervous and circulatory systems, which required an entire body to be injected with coloured wax and displayed.

“The valuable and unique knowledge that could only be obtained from the examination of these developing bodies made them essential to the study of anatomy,” says Dittmar.

“During much of the 18th and 19th century, executed criminals provided the main legal access to cadavers, and it was previously thought that dissection of young children was relatively rare. However, changes in the law may have resulted in infant dissections becoming more common.”

The Murder Act in 1752 gave the judiciary power to allow executed murderers – almost entirely men – to be used for medical dissection. These felons hardly made a dent in the growing demand for bodies, and a black market flourished.

Bodies acquired (often grave robbed) by gangs of ‘resurrectionists’, or body-snatchers, were usually sold by the inch, so those of infants were not very profitable, although there are records of ‘smalls’ being traded.

The Anatomy Act of 1832 allowed workhouses and hospitals to donate the bodies of the poor if unclaimed by family, in an attempt to abate the resurrectionists. Infectious diseases such as cholera and tuberculosis were common killers during the industrial revolution, and a major cause of infant death in hospitals and beyond. Workhouses were desperate places, and nearly always lethal to infants.

Until 1838, a legal loophole did not require a stillborn baby to be registered, and a body could be easily sold to an anatomist through an intermediary. But the New Poor Law Amendment Act of 1834 may have had the most significant repercussions of any law for infant material in anatomy collections, say the researchers.

The Act ended parish relief for unmarried women and the availability of assistance from the father of an illegitimate child. Part of Victorian society’s attempt to curtail the illegitimate birth rate, the law succeeded only in contributing to dire situations for poor unwed women, mainly in service positions, who fell pregnant.

“This left very few options for these women: the workhouse, prostitution, abortion and infanticide – all of which were life-threatening,” says Mitchell. By the 1860s, infanticide in England had reached epidemic proportions.

“Our research shows that the major sources of the bodies of very young children were from stillborn babies of destitute mothers, babies who died from infectious diseases, those dying in charitable hospitals, and unmarried mothers who secretly murdered their new-born to avoid the social stigma of single parenthood,” says Mitchell.

“Poor and desperate women at the time of the industrial revolution could not only save the cost of a funeral by passing their child’s body to an anatomist, but also be paid as well. This money would help feed poor families, so the misfortune of one life lost could help their siblings to survive tough times.”