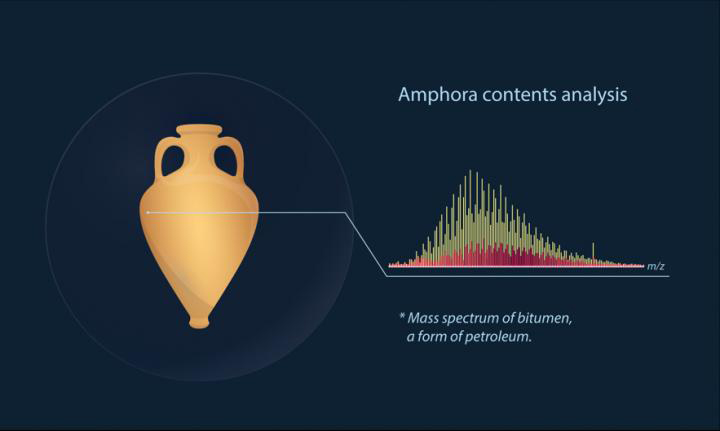 Russian scientists have identified the components of the oldest bitumen sample to be found in an ancient vase and made an accurate estimate of its age.

Bitumen is a form of petroleum found in natural deposits. Its use dates back to the Stone Age. The word “mummy”, for example, derives from the Persian “mūm”, or “bitumen”, because this substance was used in embalming. The Greeks used bitumen in construction, medicine, and warfare—it is possible that the legendary “Greek fire” was based on bitumen. The oldest amphora filled with bitumen (5th century BCE) was discovered by Russian archaeologists on the Taman Peninsula, a highly volcanically active region (numerous petroleum seeps are located there) and a possible source of the bitumen imported by the Greeks.

More oxygen as time goes by

The analysis of ancient bitumen samples can reveal their age and origin. US researchers have used a mummy to demonstrate that ancient Egyptian bitumen did not come exclusively from the Dead Sea. If the age of the bitumen sample from the amphora is indeed close to 2,500 years, this implies a prolonged period of biodegradation due to the activity of bacteria, causing oxidation of the organic molecules in bitumen, i.e. the gradual introduction of additional oxygen into the sample. This means that older samples contain more oxygen atoms.

Elemental analysis of the Taman sample indicated an oxygen (O) content of 11%, as opposed to 1% or less in fresh petroleum samples, with the other elements—carbon (C), hydrogen (H), nitrogen (N), and sulfur (S)—present in the normal amounts. This indicates that the sample had been degrading for a long time within the amphora; apparently it had been there for 2,500 years. However, elemental analysis does not identify the kinds of molecules present in the sample. To do this, the researchers used ultrahigh-resolution mass spectrometry.

Distinguishing the numerous peaks in the mass spectra of bitumen from one another is a challenge. To do this, the researchers utilised the advanced ultrahigh-resolution mass spectrometry techniques developed at the laboratory, which allowed them to distinguish molecules whose masses differ only by a fraction of that of an electron. This meant that not one of the individual components in the bitumen sample–and there are tens of thousands of them–escaped their attention. They also determined the elemental composition of the constituents. The analysis revealed that among substances in the Taman bitumen sample that contain oxygen, most have four to nine oxygen (O) atoms. Samples of ordinary petroleum, however, contain numerous compounds with two oxygen atoms and very few of those with three or four oxygen atoms. Exposing petroleum to ozone (O) leads to oxidation and lends substances with an oxygen content similar to that of the bitumen from the amphora (see illustration above for comparison), which supports the theory that the Taman sample bears the effect of prolonged oxidation.

Oxygen can actually be present in different ‘segments’ of a molecule. Those ‘segments’ that determine the chemical properties of the substance are referred to as functional groups. To identify the functional groups of the substances in the sample, the scientists used the hydrogen/deuterium exchange reaction. The principle behind this technique is that deuterium (D), also known as heavy hydrogen, will only replace those hydrogen (H) atoms that are part of a functional group. Substitution of a deuterium atom for a hydrogen atom in a molecule causes its peak on the mass spectrum chart to be shifted. It turned out that there was an additional hydrogen/deuterium exchange in the case of the ancient bitumen, when compared to the fresh sample. This lead the authors of the paper to conclude that the sample from the amphora contained molecules not only with one OH group but also with two OH groups that are products of the degradation process.

The research supervisor of this work is Professor Evgeny Nikolaev, scientific heads MIPT’s Laboratory of Ion and Molecular Physics, the same name lab at the Institute of Energy Problems of Chemical Physics (of the Russian Academy of Sciences) and the Laboratory of Mass Spectrometry at Skoltech Space Centre. He and Yuri Kostyukevich postdoctoral researcher at Skoltech, who performed main experiments in this project, shared his perspective on the discovery – “Ultrahigh-resolution mass spectrometry is an immensely powerful technique in analytical chemistry. Applied to petrochemistry, archaeology, and medicine it provides a valuable insight into the molecular composition of a substance. The analysis of ancient bitumen has already revealed much about the transformations that petroleum undergoes over the course of millennia. Thanks to mass spectrometry, we might be able to obtain new information about the goods traffic and trade routes in the ancient world.”