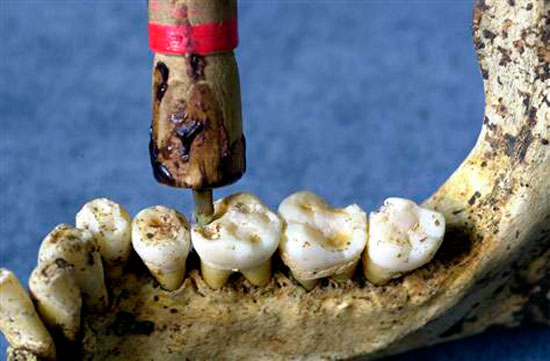 First attempts in treating ailments of the teeth

Mankind’s health suffered as a result of forming permanent settlements and farming. The consumption of sweet food brought about dental decay which necessitated dental and periodontal surgery.

As early as 7000 BC, as shown by excavations in Pakistan (conducted by the University of Poitiers in France), examples appear of ancient dentists’ techniques and the first efforts to treat dental ailments. Through experimental archaeology, researchers try to apply the methods of ancient Pakistanis with the means they had available at that time. The result is spectacular.

According to the findings, man was able to intervene, changing the anatomy of the tooth, use primitive drills, fill cavities and replace lost teeth with shells ,bones and semiprecious stone to preserve the jaw’s balance. These dental operations were probably motivated by the need to relieve the patient’s pain.

While examining skeletons during excavations in Mehrgarh, Pakistan, scientists discovered nine human dentures with holes as deep as 3.5 millimeters in the premolars and molars with traces of bitumen (tar) that had possibly been used as fillings.

The fact that most surgery had been done on the premolars and molars that are placed in less visible parts of the denture, as well as the bitumen traces, have made scientists conclude that it is purely  medical rather than cosmetic surgery. It is also very probable that plants with anesthetic properties were used during these painful operations.

From texts of the Roman era we learn that care was taken of oral hygiene, the securing of loose teeth and toothache, but the Etruscans were those who introduced “gold” teeth and tooth “bridges” in prosthetic dentistry.