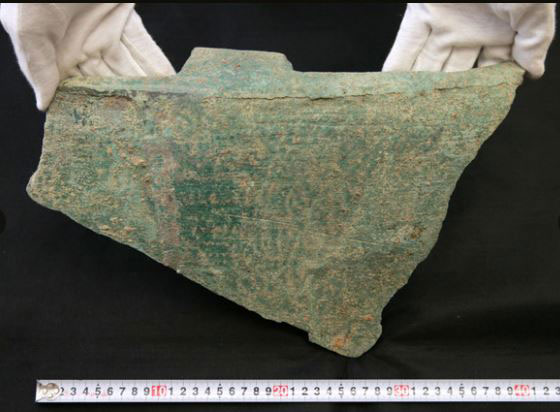 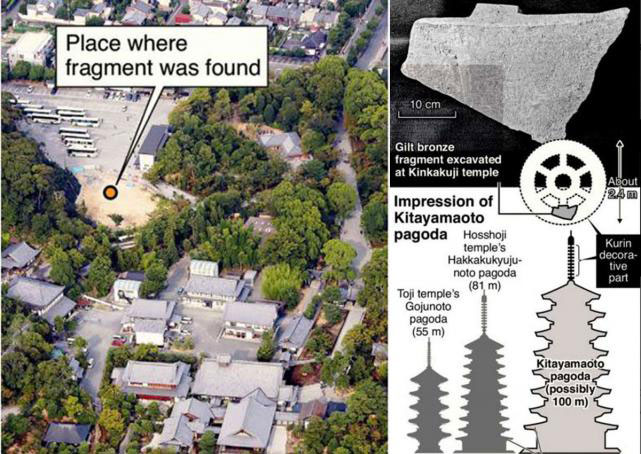 Excavated item is perhaps from the tallest Buddhist pagoda in Japan

A fragment discovered in Kinkakuji temple at Kyoto, Japan, is thought to be of the tallest pagoda ever built in Japan. The announcement was made last week by the Kyoto City Archaeological Research Institute.

The fragment is part of a sorin, a decorative part placed at the kurin, a circular part at the top of a pagoda. The item is made of bronze, it is 37.4 cm wide, 24.6 cm long, 1.5 cm thick and weighs 8.2 kilos. It is therefore estimated that the diameter of the  kurin was about 2.4 metres.

The pagoda that experts believe the fragment belonged to was called Kitayama Daito, and it was found during excavations at a parking area. It is from the Muromachi period and the pagoda is thought to have been built by Ashikaga Yoshimitsu, the third shogun of the Muromachi shogunate. He is said to have built two huge pagodas, one 109 metres tall, at Shokokuji, and another one, Kitayamaoto, where later Kinkakuji temple was built. Both structures were burnt by lightning.

This is the first fragment of the structure found, and researchers hope it will yield useful information regarding the size and appearance of the pagoda. Three bronze fragments were found in total that seem to have broken off from a circular objects, but the one described here is the largest. It is made of copper with gold leafing.

According to Yoshiaki Maeda, deputy director of the Kyoto City Archaeological Research Institute, Kitayama Daito was perhaps the tallest Buddhist pagoda ever built in Japan.

According to a document from the Muromachi period, the tallest known pagoda built in Japan was about 110 metres. The new fragments suggest that Kitayama Daito was about the same size. However, no remains of its foundation have been found, and it is not known where it was located. So, according to Yoshiyuki Tomishima, associate professor of architectural history at the Kyoto University Graduate School of Engineering, it is necessary to uncover the location of the tower before we can say for sure that the fragments are from Kitayam Daito.

The parts will be on special exhibition at Kyoto City Archaeological Museum from July 9 through November 27.