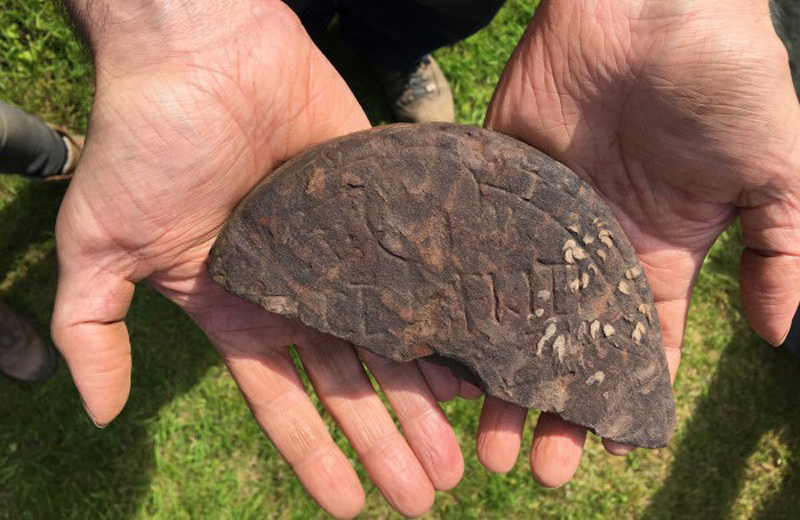 Sandstone marker dated to the mid-7th to 8th century AD

Experts from the Department of Archaeology at Durham University and the crowd-funded archaeology platform DigVentures have found what they believe to be evidence of the earliest monastery on The Holy Island of Lindisfarne in Northumberland, UK.

During a two week archaeological dig on the island in June this year (2016), a rare Anglo-Saxon grave marker was found.

The small, round-headed sandstone marker, also known as a name stone, has been dated to the mid-7th to 8th century AD, well within the time period of Lindisfarne’s first monastery.

Experts believe the carved letters “frith”, which are still visible on the face of the stone, form the end of the name of the monk which it would have been made to commemorate. “Frith” was a common element of Anglo-Saxon names.

Although the stone was not found marking a grave, fragments of human bone have been found nearby suggesting that there is a cemetery in close proximity.

Dr David Petts, Senior Lecturer in the Department of Archaeology and co-director and academic lead on the dig said: “This is a stunning find, of exactly the period we’re looking for.

“This stone could have been carved during the time when the Lindisfarne Gospels were being written. It confirms we’re hot on the trail of the very earliest monastery here in Lindisfarne.”

The first monastery on the Holy Island of Lindisfarne was an important centre of Christianity in Anglo-Saxon times. The beautifully illustrated Lindisfarne Gospels, which are recognised as one of the country’s most precious religious treasures, were also produced there.

The Lindisfarne monastery was one of the first sites to be raided by the Vikings in the late 8th Century. The increasing regularity of these raids led to the monastic community leaving the island and eventually re-establishing on the site of what is now Durham Cathedral.

The exact location of the Anglo-Saxon monastery on Lindisfarne is not known. Dr Petts has led a research project into its possible location and the monastery’s role at the heart of Anglo-Saxon Northumbria.

In September 2012 Dr Petts carried out a major geophysical survey on the island, funded by National Geographic. This survey identified a possible boundary for the monastery, which was different from where earlier research had indicated it may lie.

The most recent dig, carried out in June in collaboration with DigVentures was intended to further investigate the results of the earlier geophysical survey and try to learn more about the possible location of Lindisfarne’s earliest monastery.

The June 2016 dig was crowdfunded through DigVentures, raising nearly £25,000 from a worldwide community of funders, some of whom have joined the archaeologists in the trenches.

Dr Petts says: “This project would not have been possible without the funding and participation provided by the public.

The hope is that further archaeological investigations, which the team plan to undertake in 2017, will uncover more evidence of the monastery and its exact location.