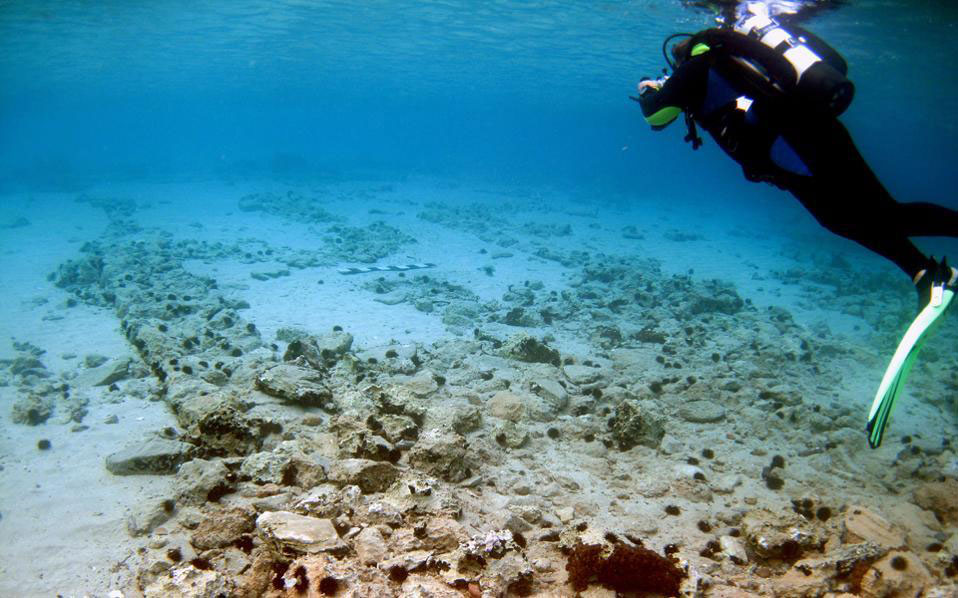 Authorities join forces to promote it

As Pavlopetri is threatened by pollution and looting, authorities now take steps to promote the site.

A few meters below the surface of the water, next to a sandy beach on Vatika Bay in southeastern Peloponnese, lie the archaeological remains of the oldest submerged city in the world. Pavlopetri—named after a modern settlement—was a Bronze Age city that was occupied from the third millennium until 1100 BC. The surviving archaeological remains include traces of buildings—including thresholds and lintels—and courtyards, streets, and burial places.

A recent research project examined thousands of fragments of objects on the sea floor, from ordinary tableware to large Minoan jars. These discoveries provide a tantalizing glimpse into everyday life and society at Pavlopetri, thousands of years ago. But this renewed scientific interest in Pavlopetri has also helped to reveal the many threats that the site faces today.

Dr Nicholas Flemming, a marine geo-archaeologist at the Institute of Oceanography at the University of Southampton discovered Pavlopetri in 1967. He and Despina Koutsoumba, an archaeologist at the Ephorate of Underwater Antiquities, recently organized an underwater tour at the site. “Some walls can be seen at a depth of half a meter,” Koutsoumba said.

Currently, Pavlopetri is threatened by pollution caused by large ships anchoring in Vatika Bay. Their impact takes many forms: discharge of waste, ballast water, and chemicals used to clean hulls and propellers all contribute to endanger the underwater ruins. Smaller boats travel over the archaeological remains, leading to shifting sediments that can damage the foundations and walls. Meanwhile, the site lacks physical protection and can be visited without restriction, leaving it vulnerable to looting and pilfering. Construction of a natural gas pipeline from Crete to the Peloponnese, and a power plant near Pavlopetri, is another looming threat.

Now, the Ephorate of Underwater Antiquities, the Municipality of Elafonisos and the Regional Authority of the Peloponnese, joined forces for the promotion of the site by installing underwater signs, handing out informative material, preparing a waterproof map and designing a tour for visitors. The creation of a sea park is also an option, as Flemming says, stressing however that in this case authorities should pay attention and take all necessary measures to prevent any damage at the Bronze Age underwater site.

Pavlopetri was listed on the 2016 World Monuments Watch in October 2015.