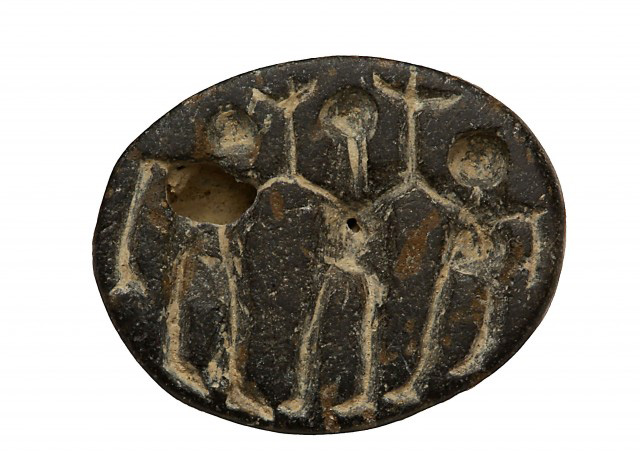 A stone seal dating back approximately 3,000 years was discovered by archaeologist Robert Mullins, Ph.D., professor of biblical studies at Azusa Pacific University, and his team during a summer dig at Abel Beth Maacah, a 35-acre tel in the northernmost border of present day Israel. The oval-shaped stone seal is engraved with a motif of three figures holding up their hands in what is understood to be a ritual dance scene.

“Ritual symbolic behavior and cultural traditions are among the most elusive categories of ancient life for the archaeologist to fathom,” said Mullins. “While the scene on the Abel Beth Maacah seal can be interpreted in different ways, it likely represents a dance, related perhaps to fertility, military victory, mourning, or divine protection. This seal is a small, yet meaningful artifact that helps us construct an understanding of this interesting and important biblical site.”

The seal serves as a chronological marker and hints that the population was Israelite in the 9th century BCE. This discovery could give credence to the biblical history of Israel’s occupation of Abel Beth Maacah in the 8th-10th centuries BCE (2 Sam. 20:14–22), and the destruction of Abel Beth Maacah by the Aramean King Ben Hadad in the 9th century BCE (1 Kings 15:20).

Azusa Pacific University’s dig at Abel Beth Maacah has unearthed other treasures, including a clay jug containing silver earrings and ingots in 2014. Mullins, along with several APU students, will join his co-director, Nava Panitz-Cohen, Ph.D., from the Institute of Archaeology at Hebrew University, and their team of archaeologists and scholars from partner schools, including Cornell University, Trinity Evangelical Divinity School, Indiana Wesleyan University, University of Arizona, and Pillar Seminary to resume the dig next summer.