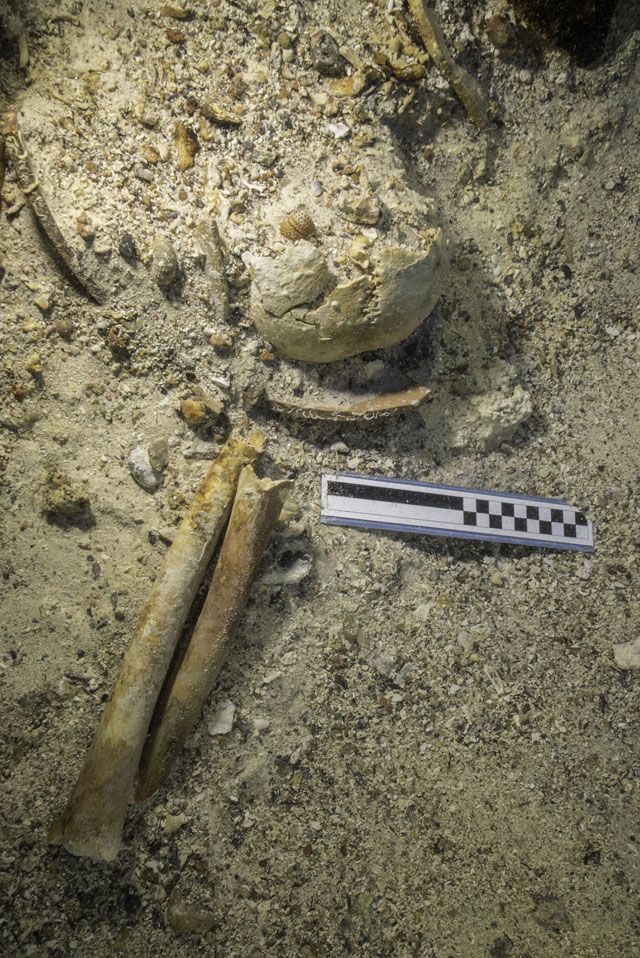 By the “Return to Antikythera” international research team

The “Return to Antikythera” international research team discovered a human skeleton during its ongoing excavation of the famous Antikythera Shipwreck (circa 65 BC). The shipwreck, which holds the remains of a Greek trading or cargo ship, is located off the Greek island of Antikythera in the Aegean Sea. The first skeleton recovered from the wreck site during the era of DNA analysis, this find could provide insight into the lives of people who lived 2100 years ago.

Led by archaeologists and technical experts from the Hellenic Ministry of Culture and Sports and Woods Hole Oceanographic Institution (WHOI), the team excavated and recovered a human skull including a jaw and teeth, long bones of the arms and legs, ribs, and other remains. Other portions of the skeleton are still embedded in the seafloor, awaiting excavation during the next phase of operations.

“Archaeologists study the human past through the objects our ancestors created,” said Brendan Foley, a marine archaeologist with WHOI. “With the Antikythera Shipwreck, we can now connect directly with this person who sailed and died aboard the Antikythera ship.”

The Antikythera Shipwreck is the largest ancient shipwreck ever discovered, possibly a massive grain carrier. It was discovered and salvaged in 1900 by Greek sponge divers. In addition to dozens of marble statues and thousands of antiquities, their efforts produced the Antikythera Mechanism —an astounding artifact known as the world’s first computer. In 1976, Jacques-Yves Cousteau and the CALYPSO crew returned to the wreck and recovered nearly 300 more objects, including skeletal remains of the passengers and crew.

The skeleton discovered on August 31, 2016, is the first to be recovered from an ancient shipwreck since the advent of DNA studies. Ancient DNA expert Dr. Hannes Schroeder of the Natural History Museum of Denmark in Copenhagen, hastened to Antikythera to view the remains. Once permission is obtained from the Greek authorities, samples will be sent to his laboratory for a full suite of analyses. If enough viable DNA is preserved in the bones, it may be possible to identify the ethnicity and geographic origin of the shipwreck victim.

“Against all odds, the bones survived over 2,000 years at the bottom of the sea and they appear to be in fairly good condition, which is incredible,” said Schroeder.

The Antikythera research team generates precise three-dimensional digital models of every artifact, allowing discoveries to be shared instantly and widely even if the objects remain on the sea floor. Several 3D models of the skeletal remains are available for researchers and the public to view on the Antikythera Project webpage.

Jonathan Knowles, Autodesk Explorer In Residence, said, “Our reality capture technology is not only helping share the amazing story of the Antikythera wreck with the world using digital models and 3D printed artifacts, it is enabling important preservation and furthering meaningful research.”