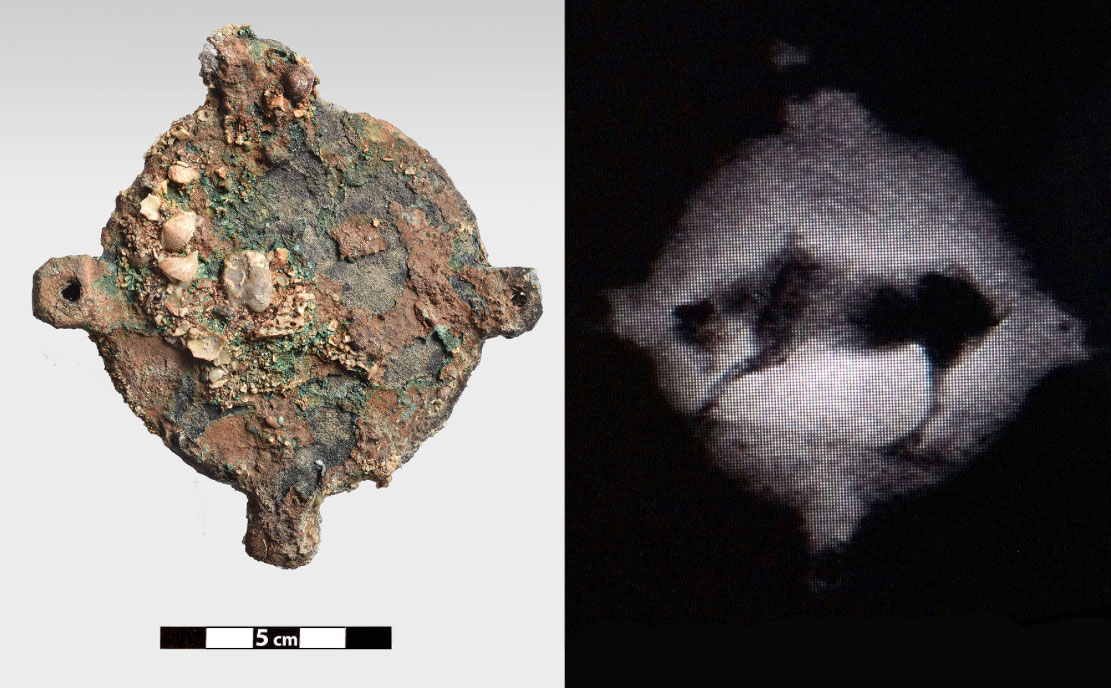 More statues will be found in the Antikythera Shipwreck

Head of the Ephorate of Underwater Antiquities, A. Simosi said

Impressive finds have been located this year in the region of the Antikythera Shipwreck, where one of the most important archaeological underwater surveys of all times was continued and also one of the most promising excavations of the Ephorate of Underwater Antiquities (EUA).

Among finds were sections of bronze statues, an intact rectangular marble slab used as a table, a wooden ship’s part, nails, small items, pieces of broken vases and a stamped handle of an amphora. Also an enigmatic object that immediately caught the archaeologists’ attention.

“This year’s excavation of the Antikythera  Shipwreck wαs  very significant because really notable objects have been found. We archaeologists attached more importance to a disc shaped object which at first did not seem particularly significant as it was covered by a crust. When however it was x rayed at the Attikon Hospital, the image of an animal appeared; that of a bull. The object, not examined yet because of its being desalinated, looks like some component, maybefrom some mechanism of the ship says Dr Angeliki Simosi, head of the Ephorate of Underwater Antiquities, to the Athens and Macedonian News Agency, referring to this object which is one of a kind.

Naturally, the archaeologists’ interest is also focused on the rest of the objects. Such as the two parts of bronze statues, one belonging to the folds of a garment and the other to a hand, which combined with the rest of the marble and bronze fragments located on the sea bed, make it hopeful that new impressive finds will be made.

“We have a bronze arm intact from shoulder to fingers of which two are missing and a part of a piece of clothing which could be from a hymation or some other garment. These are very significant findings because they complete, if you like, the puzzle of putting some statues together. What is certain is that there are more statues on the sea bed that must be pulled up next year, when excavations are continued” says Dr Simosi.

This is not such an easy task, since the bronze and marble fragments “are under rocks. It is very difficult to pull them up and special means are required for this. All the same, year by year the excavation teaches us what to do, so now we know exactly where to locate the finds, allowing us to go ahead with pulling them up”, said the head of the EUA to the News Agency, adding that the ship components are also very important.

“Lots of parts of the ship’s wood have been found, as well as lead leaf from its bottom side and nails. All these are very significant finds” she adds. Regarding a possible presentation of the antiquities to the public, like the one that took place last year at the Laskarides Foundation, Dr Simosi points out that “it is something we would very much like to do, provided we have the approval of the Central Archaeological Council”.

For the third consecutive year, underwater excavations at the site of the Antikythera shipwreck were conducted by the Greek Ephorate of Underwater Antiquities. Work was carried out between the 4th and the 20th of September, under particularly good weather conditions. Research was directed by the EUA head Dr Angeliki Simosi, while the scientists responsible for the project and field operators were archaeologists Th. Theodoulou and D. Kourkoumelis, also from the EUA.