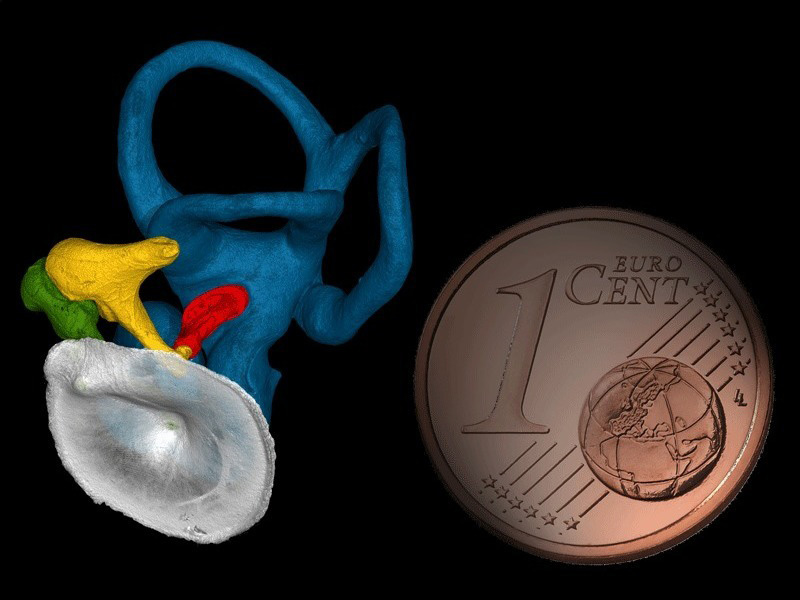 A research team led by scientists of the Max Planck Institute for Evolutionary Anthropology scanned the skulls of Neandertals and found the small middle ear ossicles, which are important for hearing, still preserved within the cavities of the ear. To their surprise, the Neandertal ossicles are morphologically distinct from the ossicles of modern humans. Despite the differences in morphology, the function of the middle ear is largely the same in the two human species.

The authors relate the morphological differences in the ossicles to different evolutionary trajectories in brain size increase and suggest that these findings might be indicative of consistent aspects of vocal communication in modern humans and Neandertals. These findings are also of importance for shedding light on the emergence of human spoken language, which can only be inferred indirectly from the archaeological and fossil record.

The three bones of the middle ear (hammer, anvil, stapes) make up the ossicular chain. This bony chain, which is found in all mammals is dedicated to the transmission of sound waves from the tympanic membrane to the inner ear and helps in amplifying the energy of airborne sound in order to allow the sound wave to travel within the fluid-filled inner ear.

Moreover, the ear ossicles are not only important for correct hearing but are also the smallest bones of our body. Thus, it does not surprise that the ossicles are among the most rarely found bones in the mammalian fossil record including the one of human ancestors. Given their important role in audition this lack of knowledge has ever been frustrating for researchers interested in studying hearing capacities of extinct species.

This also applies to our closest extinct relatives. The Neandertals whose communicative capacities including existence of human spoken language is a major scientific debate ever since the first discovery of Neandertal remains. A research team led by Alexander Stoessel from the Max Planck Institute for Evolutionary Anthropology in Leipzig used high-resolution computer tomography scans of Neandertal skulls and systematically checked for ossicles that potentially became trapped within the cavity of the middle ear.

And indeed, the researchers found ear ossicles in 14 Neandertal individuals coming from sites in France, Germany, Croatia and Israel, resulting in the largest sample of ear ossicles of any fossil human species. “We were really astonished how often the ear ossicles are actually present in these fossil remains, particularly when the ear became filled with sediments” says lead researcher Alexander Stoessel.

After virtually reconstructing the bones, the team – which also included scientist from the Friedrich-Schiller University in Jena and the University College in London – compared them to ossicles of anatomically modern humans and also chimpanzees and gorillas which are our closest living relatives.

Since ossicles are not only small but also complex-shaped the researchers compared them by means of three-dimensional analysis that uses a much larger number of measuring points allowing for examination of the three-dimensional shape of a structure. “Despite the close relationship between anatomically modern humans and Neandertals to our surprise the ear ossicles are very differently shaped between the two human species” says Romain David who was involved in the study.

Based on the results of the morphological comparison the research team examined the potential reasons for these different morphologies. In order to see if these differences may affect hearing capacity of Neandertals and modern humans or reflects a tight relationship with the base of the skull they also analyzed the structures surrounding the ear ossicles. The outcome of this analysis was surprising, again since the functional parameters of the Neandertal and modern human middle ear are largely similar despite contrasting morphologies.

Instead, the team found the ear ossicles strongly related to the morphology of the surrounding cranial structures which also differ between the two human groups. The reseachers attribute these differences to different evolutionary trajectories that Neandertals and modern humans pursued in order to increase their brain volume which also impacted the structures of the cranial base which the middle ear is a part of.

“For us these results could be indicative for consistent aspects of vocal communication in anatomically modern humans and Neandertals that were already present in their common ancestor” says Jean-Jacques Hublin who is an author of this study and continues “these findings should be a basis for continuing research on the nature of the spoken language in archaic hominins”.

The findings are published in Proceedings of the National Academy of Sciences.