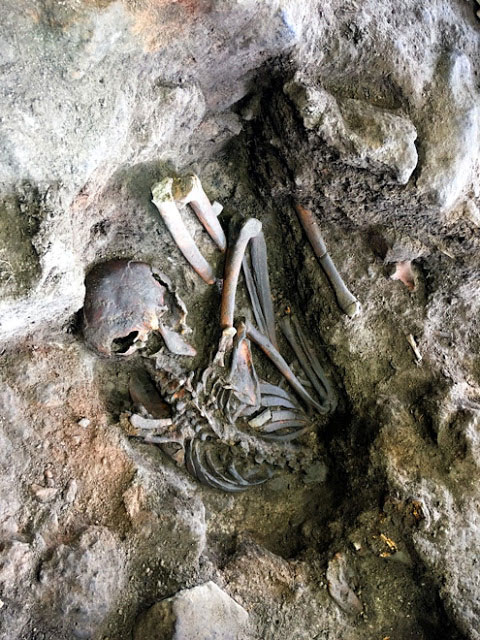 Japan burial is identified as the oldest in the country

From the Pottery Culture Period

Researchers have identified the oldest formal burial in Japan, dating back to the Pottery Culture Period. The burial included human remains which are estimated to be 8,300 years old.

The burial was discovered at the Lyaiiwakage site, near a river high on a slope and has been protected from rain by the hollow of a cliff.

The team from Kokugakuin University, which performed the dating, analysed the remains of an adult, whose skeleton was found in a burial pit. The skeleton was placed in a position with bent knees and hunched back, a method known as kusso common during the early Jomon period. It was buried 80 cm deep, under ash from cooking and fires which helped preserve the remains with its alkaline quality.

The discovery will hopefully help researchers gain an understanding of how people were living in a mountainous area of the country about 15,000 years ago as well as of the processes leading to the establishment of the Jomon culture, said Yasuhiro Taniguchi, professor of Prehistoric Archaeology at the University. Excavations and surveying at the site have yielded large numbers of earthenware, stone tools, bones of deer and wild boar, and plant seeds.

Skeletal remains of at least six individuals, adults and children, have also been discovered at the site, a rare occasion at a single location. They were found in a section of 4metres deep and 4metres wide. Researchers hope that further DNA analyses of the remains will help them determine the sex, age and genetic characteristics of the Jomon individuals.
Human remains of the same period have been discovered in other prefectures as well, such as Nagano, Tochigi and Chiba.