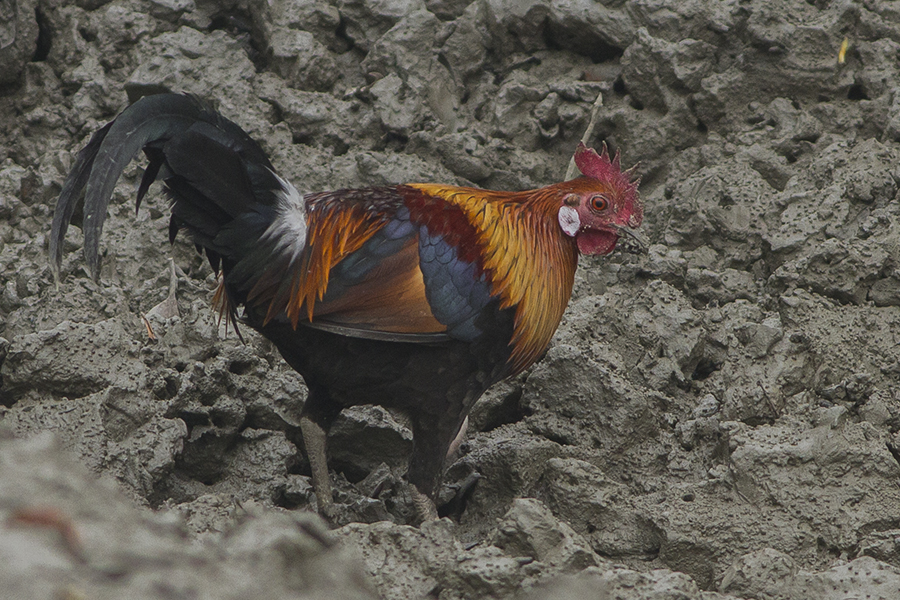 How the chicken crossed the Red Sea

The discarded bone of a chicken leg, still etched with teeth marks from a dinner thousands of years ago, provides some of the oldest known physical evidence for the introduction of domesticated chickens to the continent of Africa, research from Washington University in St. Louis has confirmed.

Based on radiocarbon dating of about 30 chicken bones unearthed at the site of an ancient farming village in present-day Ethiopia, the findings shed new light on how domesticated chickens crossed ancient roads — and seas — to reach farms and plates in Africa and, eventually, every other corner of the globe.

“Our study provides the earliest directly dated evidence for the presence of chickens in Africa and points to the significance of Red Sea and East African trade routes in the introduction of the chicken,” said Helina Woldekiros, lead author and a postdoctoral anthropology researcher in Arts & Sciences at Washington University.

The main wild ancestor of today’s chickens, the red junglefowl Gallus gallus is endemic to sub-Himalayan northern India, southern China and Southeast Asia, where chickens were first domesticated 6,000-8,000 years ago. Now nearly ubiquitous around the world, the offspring of these first-domesticated chickens are providing modern researchers with valuable clues to ancient agricultural and trade contacts.

The arrival of chickens in Africa and the routes by which they both entered and dispersed across the continent are not well known. Previous research based on representations of chickens on ceramics and paintings, plus bones from other archaeological sites, suggested that chickens were first introduced to Africa through North Africa, Egypt and the Nile Valley about 2,500 years ago.

The earliest bone-based evidence of chickens in Africa dates to the late first millennium B.C., from the Saite levels at Buto, Egypt — approximately 685-525 B.C.

This study, published in the International Journal of Osteoarchaeology, pushes that date back by hundreds of years. Co-authored by Catherine D’Andrea, professor of archaeology at Simon Fraser University in Canada, the research also suggests that the earliest introductions may have come from trade routes on the continent’s eastern coast.

“Some of these bones were directly radiocarbon dated to 819-755 BC, and with charcoal dates of 919-801 BC make these the earliest chickens in Africa,” Woldekiros said. “They predate the earliest known Egyptian chickens by at least 300 years and highlight early exotic faunal exchanges in the Horn of Africa during the early first millennium BC.”

Despite their widespread, modern-day importance, chicken remains are found in small numbers at archaeological sites. Because wild relatives of the galliform chicken species are plentiful in Africa, this study required researchers to sift through the remnants of many small bird species to identify bones with the unique sizes and shapes that are characteristic of domestic chickens.

Woldekiros, the project’s zooarchaeologist, studied the chicken bones at a field lab in northern Ethiopia and confirmed her identifications using a comparative bone collection at the Institute of Paleoanatomy at Ludwig Maximillian University in Munich.

Excavated by a team of researchers led by D’Andrea of Simon Fraser, the bones analyzed for this study were recovered from the kitchen and living floors of an ancient farming community known as Mezber. The rural village was located in northern Ethiopia about 30 miles from the urban center of the pre-Aksumite civilization. The pre-Aksumites were the earliest people in the Horn of Africa to form complex, urban-rural trading networks.

Linguistic studies of ancient root words for chickens in African languages suggest multiple introductions of chickens to Africa following different routes: from North Africa through the Sahara to West Africa; and from the East African coast to Central Africa. Scholars also have demonstrated the biodiversity of modern-day African village chickens through molecular genetic studies.

“It is likely that people brought chickens to Ethiopia and the Horn of Africa repeatedly over long period of time: over 1,000 years,” Woldekiros said. “Our archaeological findings help to explain the genetic diversity of modern Africans chickens resulting from the introduction of diverse chicken lineages coming from early Arabian and South Asian context and later Swahili networks.”

These findings contribute to broader stories of ways in which people move domestic animals around the world through migration, exchange and trade. Ancient introductions of domestic animals to new regions were not always successful. Zooarchaeological studies of the most popular domestic animals such as cattle, sheep, goats and pigs have demonstrated repeated introductions as well as failures of new species in different regions of the world.

“Our study also supports the African Red Sea coast as one possible early route of introduction of chickens to Africa and the Horn,” Woldekiros said. “It fits with ways in which maritime exchange networks were important for global distribution of chicken and other agricultural products. The early dates for chickens at Mezber, combined with their presence in all of the occupation phases at Mezber and in Aksumite contexts 40 B.C.- 600 A.D. in other parts of Ethiopia, demonstrate their long-term success in northern Ethiopia.”