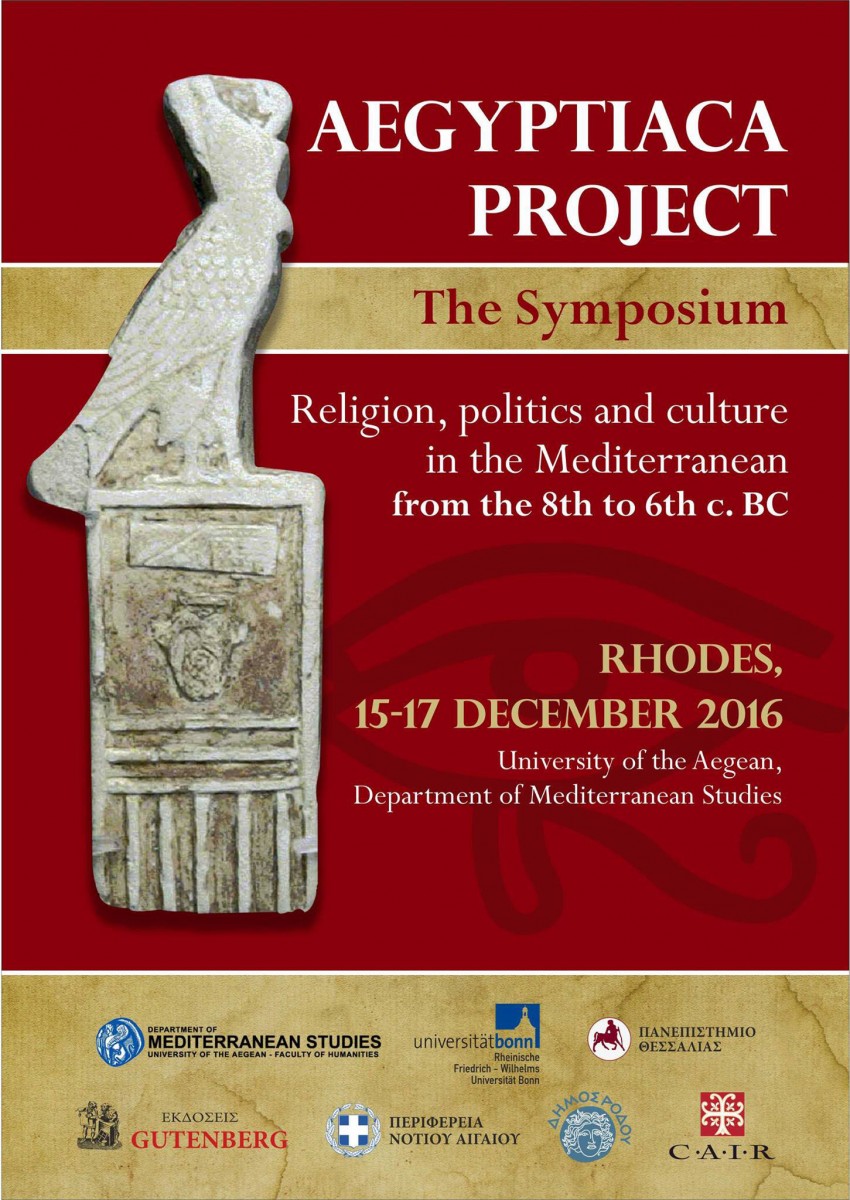 This symposium is the second international colloquium in the Ex Oriente Lux series and it was born out of the interdisciplinary research project Aegyptiaca: Ecumene and Economy in the Horizon of Religion, which is coordinated by the University of the Aegean and the University of Bonn. It focuses on the Egyptian and Near Eastern material from the archaic Greek sanctuaries and on the re-evaluation of the Egyptian cross-cultural interactivity with the Aegean world in the sphere of economy and religion. It will take place on Rhodes, 15-17 December 2016.

The broader Mediterranean region, which includes twenty-five nations today, witnessed the development of some of the most important cultures of the past one of the reasons being the facilitation of trade and cross-cultural exchanges afforded by the Mediterranean Sea. Exchanges were made on the level of goods as well as modes of thought. Foreign affairs could be solved through diplomatic exchanges whereas wars between monarchs necessitated the use of foreign mercenary armies. Braudel characterised the Mediterranean as the “sum of its routes in which the essence of the region is the product of intellectual and commercial intercourse”. The concentration of port-cities around its coast reveals the ease with which cultures have been spread by this medium.

In the absence of adequate written evidence the history of contacts in the eastern Mediterranean during the Geometric and Archaic periods is largely based on our knowledge and evaluation of imports and their archaeologically visible influence in indigenous material horizons. An exception to the dearth of sources is Herodotus. These imports are often examined alongside patterns of transmission of technology and craftsmanship, in an attempt to understand the gradual orientalising awakening of the Aegean that reached its apogee in the 7th and 6th centuries BC. Egyptian and near eastern iconography reached the Greeks and western Mediterranean via two main channels of communication or cultural networks. There was direct contact between Greeks from Asia Minor and islands with Egypt. The Greek colony at Naukratis, in the Egyptian Delta, facilitated to a great extent an undeniably great impact on one civilization to the other, which went both ways, as it is revealed in a variety of artistic and literary modes. Moreover, contacts between Greece, the East, Italy and Sicily occurred via the intermediary Phoenician cities. This may be inferred because Phoenician artifacts are found all over the Mediterranean during the Orientalising and Archaic periods.

The great majority of the Symposium’s objects are somewhat related to the sacral field, but not exclusively restricted to it. Right from the start we can notice a complex interplay between the sacral, the political and economic field. The functionality and contextualization of these objects within the broader nexus of the international relations of the seventh and sixth centuries BC must be seen as an epitome of the continuous attempts by the Saite kings of the Twenty-sixth Dynasty to re-establish a political and social link with major cultic centers in the Aegean and the Levant. Although no information on the ideological component of these votive offerings survives, the locally manufactured egyptianising objects clearly exemplify that Greeks had gained insight into Egyptian religious beliefs. Thus, they were probably familiar with the significance of at least some of these objects and the magical connotations they carried. Even if these objects were not used in the precise manner that they should have been back in Egypt, they were regarded as highly precious and venerated objects, having been assigned a whole new function and identity within a different cultural environment.

The objects themselves have not been changed; only the nature of its reception —to Egypt they were exports, while to Greece they were imports—  and possibly its status and worth. They were adapted to the international syncretistic religious background of the receptive culture. The importance of these objects within the development of the Greek culture is obvious from the fact that they generated an enormous cultural wave of egyptianisation and orientalisation in the Mediterranean world. The islands of Rhodes and Samos, especially, are the places of the strongest Egyptian impact on the Greek material culture and thus probably the mentality too.

-University of Bonn, Institute of Egyptology

-University of Thessaly, Department of History, Archaeology and Social Anthropology

-Laboratory for the Ancient World of the Eastern Mediterranean (George Mavroudis)

The organising committee intends to publish the proceedings of the symposium in a separate volume of the Journal of Ancient Egyptian Interconnections (University of Arizona, URL:https://journals.uair.arizona.edu/index.php/jaei/). All papers will be reviewed before they are accepted for publication. More detailed information will be provided at the end of the venue.