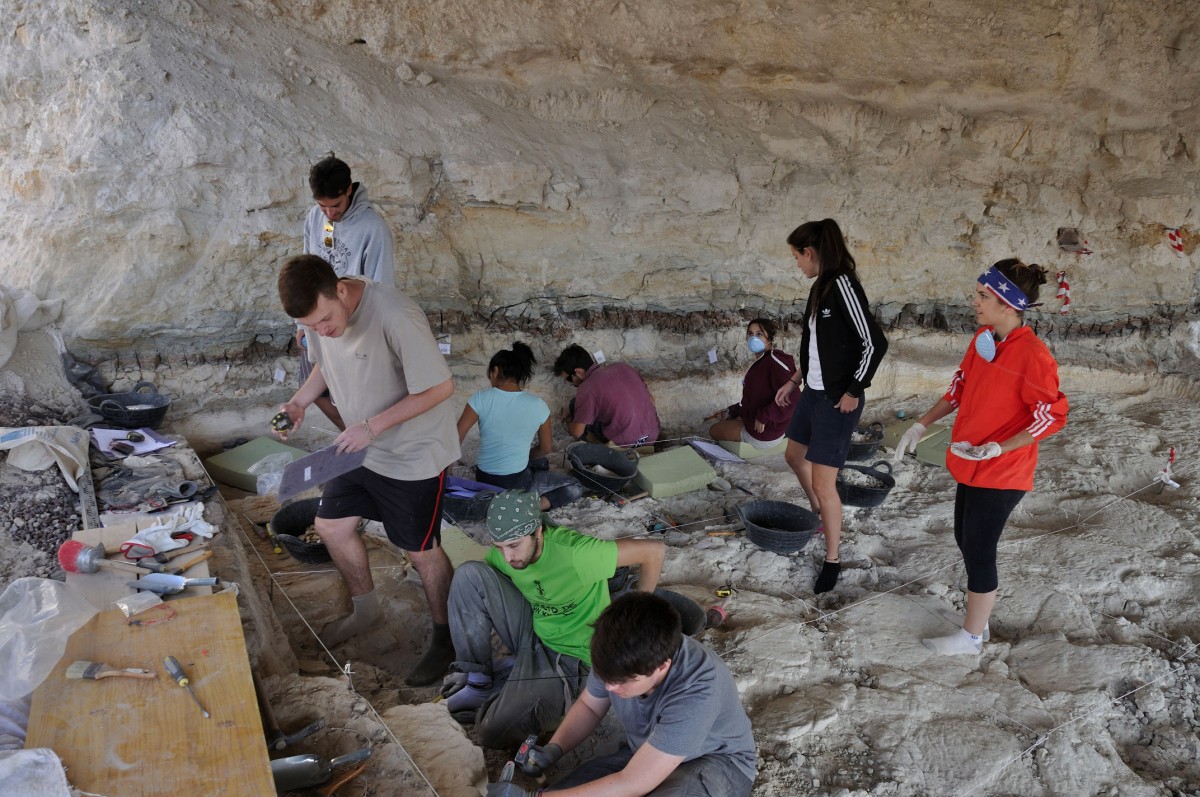 Evidence of human activity 1.4 million years ago in Orce, Granada

At the site of Barranco León

During the last campaign at the site of Barranco León in Orce, Granada the research team found remains of stone carving along with cutting and fracturing marks on the bones of animals that lived in the area.

The scientists, led by professor Juan Manuel Jimenez Arenas from the University of Granada, have found nearly a thousand records in this campaign, which now must be analyzed, and have been able to establish a spatial association between lithic industry, limestone blocks and animal remains localized in the site’s SW sector.

The research team that has conducted the last excavation campaign at the site of Barranco León in Orce (Granada), led by professor Juan Manuel Jimenez Arenas from the University of Granada (UGR), has found new evidence of human activity 1.4 million years ago.

Specifically, researchers found remains related to stone carving, animal quartering and fracturing of bones from the animals that lived on the margins of the great lake that dominated and conditioned life in the north of the province of Granada.

The number of records generated during this campaign, which ended in September, is almost a thousand, “which allows us to make a quantitative approximation to the archaeo-paleontological richness of this site”, says Jimenez Arenas, who is a researcher from the department of Prehistory and Archeology at the University of Granada.

In addition, researchers have been able to establish a spatial association between lithic industry, limestone blocks and animal remains localized in the site’s SW sector, “which will undoubtedly give us a lot of information about this site, which has a chronology of 1.4 million years”.

The interdisciplinary team that has worked in the area is formed by researchers from the University of Granada, the Catalan Institute of Human Paleoecology and Social Evolution (IPHES, from its abbreviation in Spanish), the University of Malaga (UMA) and the Autonomous University of Barcelona (UAB).

The researchers carried out the fieldwork at this emblematic site since last August 22 until September 10, thanks to a contract awarded to the University of Granada by the Andalusian Regional Government’s Ministry of Culture.

Moreover, scientists have taken photographic images in order to three-dimensionally reconstruct the excavated area using the extracted material along with material from the surroundings.

After completing the excavation, “now we face the arduous laboratory task of determining the functionality of each of the exhumed elements, interpreting aspects related to the agent who originated that spatial association, and inferring aspects of the behavior of the rich and varied faunal assemblage of the area: mammoths, hippos, rhinos, horses, cattle, deers, saber-toothed tigers, wild dogs, wolf ancestors and, of course, humans”.

Meanwhile, washing the sediment will allow to unravel paleoclimatic aspects of great scientific interest through the remains of the smallest species from the vertebrate community. The research team’s educational work has been equally successful, being remarkable the participation of UGR students, who have joined students from the universities of Seville, Málaga and Alcalá de Henares (Madrid).

Finally, the diffusion work carried out during the campaign period stands out. Thus, the three open days brought more than a hundred people to the site of Barranco León, who were interested in watching in situ fieldwork and the stories that the ravines and slopes of the basin of Guadix tell us.

The Orce Basin Archaeological Zone, where the site of Barranco León is located, was declared of Cultural Interest in 2012, and it comprises a number of archaeological and paleontological sites which are fundamental to the understanding of early human occupation of Europe, both for the quantity and the quality of their records.