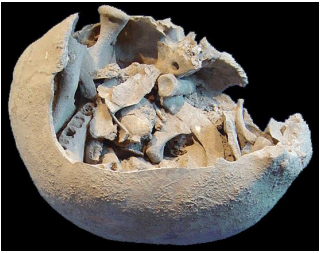 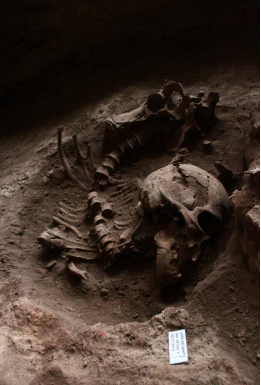 Findings from Lapa do Santo show oldest evidence in the continent of humans performing elaborated funerary rituals based on the manipulation and reduction of fresh corpses and the reorganization of body parts.

In eastern South America skeletal remains dating to 10,000 years ago are rare, precluding the proper study of their ritual dimensions. In a study published this week in the journal Antiquity an international research team led by the Max Planck Institute for Evolutionary Anthropology in Leipzig, Germany, and the University of São Paulo, Brazil, present their new findings on 26 human burials that date to this period and had been discovered at the archaeological cave site Lapa do Santo in east central Brazil.

“The Lagoa Santa region is known since the early 19th century due to the work of the Danish naturalist Peter Lund. During the following decades, many international research teams went to the region looking for evidence of the coexistence between humans and megafauna”, says André Strauss of the Max Planck Institute for Evolutionary Anthropology in Leipzig, Germany. “Although hundreds of early Holocene skeletons were exhumed in the process little has been reported about funerary rituals. Therefore, the ample diversity and elevated elaboration of the burials at Lapa do Santo at first struck us as a great surprise.”

The use of Lapa do Santo as an interment ground started between 10,300 and 10,600 years ago with the burial of complete skeletons. Between 9,400 and 9,600 years ago the reduction of the body by means of mutilation, defleshing, tooth removal, exposure to fire and possibly cannibalism, followed by the secondary burial of the remains according to strict rules, became a central element in the treatment of the dead.

In the absence of monumental architecture or grave goods, these groups were using parts of fresh corpses to elaborate their rituals, showing this practice was not restricted to the Andean region at the beginning of the Holocene. Between 8,200 and 8,600 years ago another change occurred whereby pits were instead filled with disarticulated bones of a single individual without signs of body manipulation. Those changes show that during the early Archaic, Lagoa Santa was a region inhabited by dynamic groups that were in constant transformation over a period of centuries.

“In reconstructing the life of past populations, human burials are highly informative of symbolic and ritual behavior. In this frame, the funerary record presented in this study highlights that the human groups inhabiting east South America at 10,000 years ago were more diverse and sophisticated than previously thought”, says Strauss. “The strong emphasis on the reduction of fresh corpses explains why these fascinating mortuary practices were not recognized during almost two centuries of research in the region.”