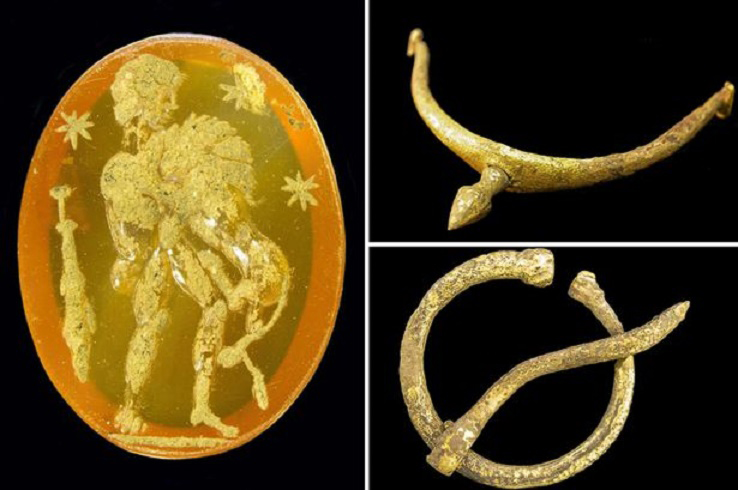 All that glittered was not gold in Roman Britain

Exhibition at the Bowes Museum

An in-focus display of artefacts found by archaeologists as part of major project to upgrade the A1 to a motorway in North Yorkshire opened at the iconic Bowes Museum in Barnard Castle on Saturday 26 November 2016.

An archaeological team of around 60 people have been working along the A1 between Leeming Bar and Barton for three years as part of a Highways England scheme to install an extra lane in each direction and improve the route to motorway standards.

During that time, archaeologists have uncovered more than 200,000 prehistoric and Roman artefacts and sieved more than 86 tonnes of sediment samples.

Recent finds include a rare carved gemstone depicting Hercules and the Lion, and coins, as well as two apparently gold plated Roman objects causing great excitement onsite. However, scientific analysis proved that, despite their glittering appearance, in fact the boot spur was brass plated and the brooch bronze plated – a mixture of metals perhaps created intentionally to appear “gold”. It is unusual to recover finds with a copper content retaining their original gold/bronze colouring, which is usually lost to a pale green/blue corrosion as the metal deteriorates in the ground. Nevertheless, sometimes the colour is preserved as it would have appeared nearly 2000 years ago, so we can experience them exactly as the Romans would have. These will be on public view for the first time in their own special case in this display.

A selection of these artefacts from the Roman town at Catterick (Cataractonium), will be on display at The Bowes Museum until March 5 2017.

Dr Kamal Badreshany, Durham Archaeomaterials Research Centre, said: “Though the objects appear to be gold, we were very surprised by the results of the X-ray analysis which confirmed them to be composed of copper and plated with two different, lustrous copper alloys”

“The smiths were obviously trying to imitate gold and, interestingly, the analysis shows they were able to do so using two very different recipes attesting to their high level of skill. The gold colour of the spur was achieved by adding zinc to a tin-bronze to form a brass plating and the gold colour of the brooch was achieved by making a bronze plating that was very high in tin (~20%).”

Dr Jane Whittaker, Head of Collections at The Bowes Museum, said: “We are delighted to be able to display these exciting items at The Bowes Museum. Visitors will be able to see them alongside other Roman artefacts from well-known sites at Piercebridge and Binchester.  Seen altogether, they represent the great wealth of evidence we have in this part of the country of Roman occupation and opportunity to appreciate the craftsmanship as well as the lives of this most fascinating culture.”