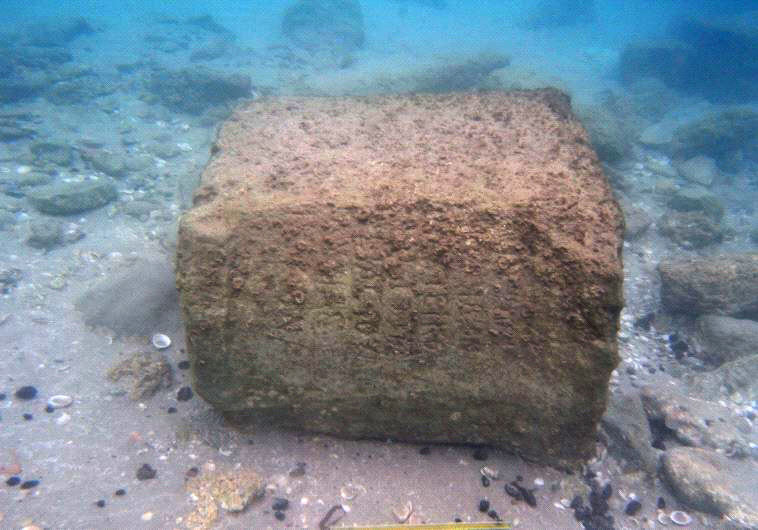 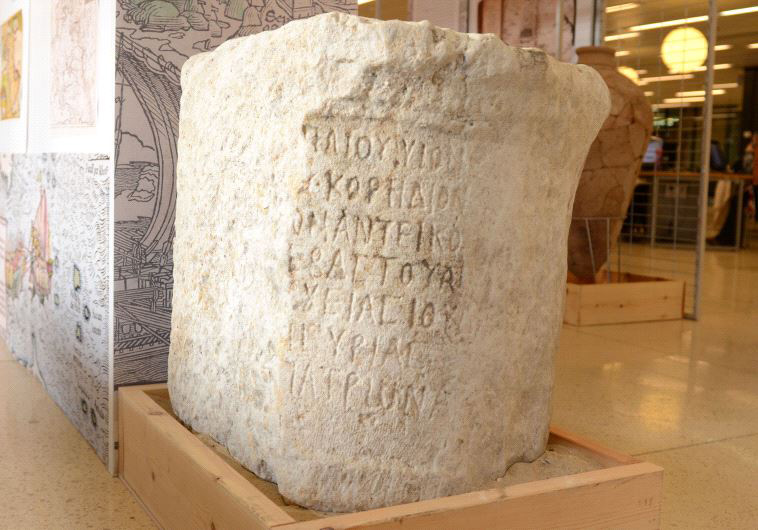 On a rare inscription

University of Haifa researchers have made an important underwater discovery: a rare inscription from the period preceding the Bar Kochba revolt permits for the first time the definite identification of Gargilius Antiques as the Roman prefect of Judea at that time.

The inscription was found during the University’s underwater excavation in and around Tel Dor. “For the first time, we can state with certainty the name of the Roman prefect of Judea during the critical period leading up to the Bar Kochba revolt. Apart from that, this is only the second time that the name “Judea” has appeared in any inscription from the Roman period,” commented Prof. Assaf Yasur-Landau, who is directing the underwater excavation, and Dr. Gil Gambash, who helped him interpret the inscription.

Tel Dor, which is identified with the Biblical site of Dor and was active until at least the 4th century CE, was excavated as early as the first half of the 20th century. Since 2003, the excavation has been led by Dr. Ayelet Gilboa of the University of Haifa and Dr. Ilan Sharon of the Hebrew University, together with Prof. Rebecca Martin of Boston University and Prof. Yasur-Landau of the University of Haifa, who is also responsible for the underwater survey around Dor.

Anchors, earthenware, and many other items have already been found in the inlets at Dor, but it is doubtful that anything prepared the researchers for their latest discovery. In January, Ehud Arkin-Shalev and Michelle Kreisher, two research students from the Coastal Archaeology laboratory, found a massive rectangular stone within the area of Dor Nature Reserve. Even before they took it out of the water they could see that the stone bore an inscription. After consulting with Kobi Sharvit, the director of the Marine Archaeology Unit of the Israel Antiquities Authority, and Yigal Ben Ari, head of the Coastal District in the Nature and Parks Authority, it was decided to remove the inscription from the sea as quickly as possible to prevent it being damaged or covered by sand.

After a complicated engineering operation to remove the finding, the researchers realized that they were looking at a hewed rectangular stone with a height of 85 centimeters and a weight of over 600 kg. The stone bore a seven-line inscription in Greek. “The stone probably formed the base of a sculpture from the Roman period. As far as we know, this is the longest inscription found underwater in Israel,” Prof. Yasur-Landau explained.
Dr. Gambash, head of the Marine Civilizations Department, joined in the task of deciphering the inscription. The work on the eroded stone has not yet been completed, but the researchers have already made two exciting discoveries. Firstly, and most importantly, the inscription mentions the name Gargilius Antiques, and states that his position was prefect of Judea. Antiques’ name also appears in a similar inscription that was found some 70 years ago, but in that case the finding did not include the name of the province of which he served as prefect. An academic debate followed, with some scholars arguing that the inscription stated that Antiques was the prefect of the province of Syria, while others were convinced that it clearly identified him as prefect of Judah. The newly-found inscription proves beyond all doubt that Gargilius Antiques was the Roman prefect of Judah during the period leading up to the outbreak of the Bar Kochba revolt in 131 CE.

But the identification of Antiques’ position is not the only exceptional feature of this finding. To date, the name “Judea” has only been found in one other Roman inscription – a famous item from Caesarea that mentions the name of the prefect Pontius Pilate. Thus the finding doubles the number of appearances of the name Judea. “Immediately after the Bar Kochba revolt, the Romans decided to abolish the province of Judea and to obliterate any mention of its name. The province was united with Syria to form a single province called Syria – Palestine. So what we have here is an inscription dated to just before Judea ceased to exist as a province under that name. Of the two inscriptions mentioning the name Judea, this is the latest, of course. Because such findings are so rare, it is unlikely that we will find many later inscriptions including the name Judea,” the researchers commented.

After the inscription has been fully deciphered, the researchers will turn to examining the historical context of the inscription. “Together with the inscription that was found around the time the State of Israel was established, we have here two sculptures honoring and lauding the prefect Antiques. The question is – why? Do these inscriptions mark two different significant events, or was it usual practice to erect a new sculpture for the patron of the city without any special reason?” The researchers will attempt to answer this question.

The inscription was revealed to the public as part of a special exhibition entitled Via Maris. The exhibition is being held in the Younes & Soraya Nazarian Library. The official opening was on 30 November 2016, as part of the fourth annual Haifa Conference on Mediterranean Research, which is devoted this year to the history of the Mediterranean. The exhibition and the conference were organized by Dr. Gil Gambash and Dr. Zur Shalev (History) to mark the upcoming inauguration of the Haifa Center for Mediterranean History (HCMH).