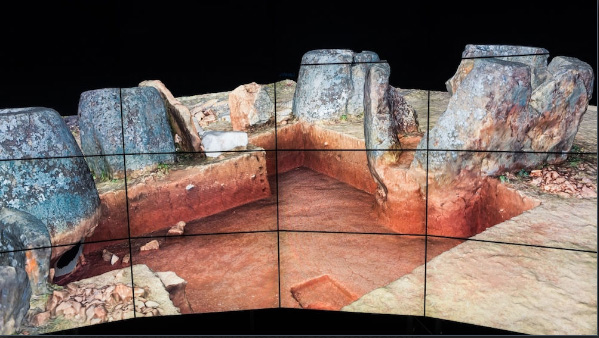 Using drone technology and virtual reality tools, archaeologists from Monash University and the Australian National University have created a 3D virtual-reality model of one of Asia’s most mysterious archaeological sites – the Plain of Jars in Laos.

The archaeological sites, which date back to the megalithic period, are difficult to access due to a large number of unexploded bombs dropped during the Vietnam war. The collaborative “virtual reality” effort will now allow important archaeological fieldwork to continue from a safe distance.

The “virtual reality” effort was led by archaeologists Dr Shewan and the ANU’s Dr Dougald O’Reilly, with the Director of the Monash Immersive Visualisation Platform (MIVP), Associate Professor David Barnes.

The team used the MIVP’s cutting edge immersive visualisation technology to map in 3D the drone footage collected from a recent field trip to Laos, to create a virtual archaeological site.

The MIVP CAVE2TM is the world’s most advanced visualisation facility of its type, and Dr O’Reilly said the technology brought together drone footage, ground penetrating radar data and digital imagery.

“All this tech and expertise enables us to create virtual replicas of archaeological sites that can be used for interpretive, analytical and management purposes.

“Having digital records of these sites is especially important as they are slated for UNESCO World Heritage inscription,” Dr O’Reilly said.

Dr Shewan said archaeologists would now be able to explore the unexplorable and continue their fieldwork from the comfort of their homes.

“The ability to integrate novel tools, possible only in the virtual space, has the power to transform archaeological practice. Where this technology will become incredibly useful is in the investigation of sites that are not accessible for ‘traditional’ archaeological excavation due to the presence of unexploded ordnance (UXO).

“In Laos, over two million tonnes of bombs and explosives were dropped during, and after, the Vietnam war. Over 30 per cent of these bombs did not explode when they hit the ground. They still pose a risk of detonation today; decades after they were dropped,” Dr Shewan said.

Currently, only seven of the over eighty known jar sites have been cleared of UXO.

“Coupling drone technology and the CAVE2TM for virtual fieldwork has some outstanding consequences. MIVP is excited to be playing an increasingly important role in identifying and supporting interdisciplinary opportunities like the Laos project,” Associate Professor Barnes said.

The five-year archaeological project is funded by an Australian Research Council Discovery Projects grant. The team, comprising Australian, Lao, Polish and New Zealand researchers, will continue their investigation at remote, mountain-top jar sites and those contaminated by UXO.