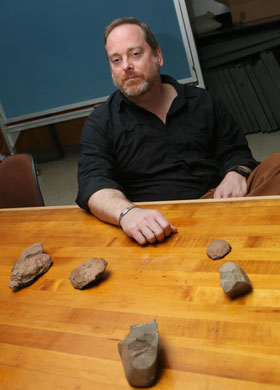 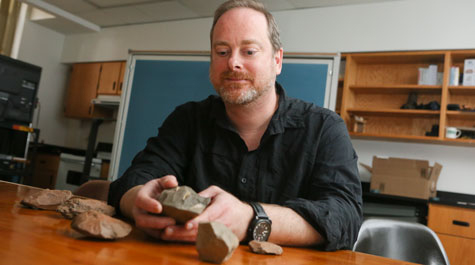 Our hominid ancestors made and used tools

Neil Norman found the tools when he and Bruce Larson were walking down the local wadi, a usually dry watercourse that hadn’t moved much in a long, long time.

Seasonal rains would flood the stream, drowning animals and washing them downstream, creating what Norman calls “a buffet of rancid carrion.” Scavengers converged on the wadi, butchering the drowned animals with stone tools they constructed on the spot.

Norman found two of those tools on that one short walk, likely near where they were dropped by their makers as long as two and a half million years ago. The individuals who made and used those tools were hominids, primate ancestors of modern humans. Back in his lab at William & Mary, Norman holds up one of the artifacts he brought back from Africa.

“This is what is known as an Oldowan chopper. You can see that it is very crude,” he explained. “The toolmaker selected a river-rounded cobble and hit it with another rock around 14 times to make a cutting tool. Feel the sharpness of the edge!”

The edge is nowhere near razor-sharp, but it is keen enough to make you handle it carefully. The worked piece of stone is astoundingly businesslike, considering how long the chopper was lying around what now is the nation of Djibouti, on the horn of Africa.

And there is some question about exactly how old the tools actually are. Norman identifies the two oldest pieces, both choppers, as Oldowan—up to 2.5 million years old. Larson doesn’t challenge Norman’s identification. In fact, he says he hopes the choppers could be proved to be Oldowan, but he waits for further research to bear out Norman’s interpretation.

It’s the context of the discovery that makes dating these artifacts so challenging. Carbon dating doesn’t work on rock, so the age of stone artifacts has to be determined from the age of items in the matrix in which it was found. A home run, Norman explained, would be to find the tools in the company of fossils.

“If I found these with hominid fossils, they would be in The New York Times the next day,” Norman said. He added that very few museums worldwide have such tools in their collections, most display resin models of famous finds. If Norman’s choppers are indeed Oldowan, they’re among the oldest manufactured items known.

“There are no stone tools that we know of that are older than Oldowan tools,” Norman said. “There is some speculation that wood might have been used before that, or bone. But those things don’t survive in the archaeological record.”

Archaeologists use the term “provenience” to describe the circumstances of an artifact’s location and situation at discovery. The choppers that Norman found had plusses and minuses in the provenience category. On the plus side, the choppers were found in a region rich in prehuman discoveries —just 700 miles from where the famous australopithecine Lucy was found.

On the minus side, Norman picked the choppers up right from the surface of the ground. The site was savannah long, long ago, but now is a rocky desert. The archaeologists found the top of the stony literally littered with artifacts representing the entire time span of humanity and pre-humanity. Larson said the richness of the site’s surface becomes especially apparent following one of the rain showers that washed the dust off. Norman, Gunter and Bassett discovered the site’s richness straightaway.

“Immediately we started finding artifacts that dated from a million years ago, all the way up to the present,” Norman said. “There were Neolithic stone structures, where people would live around 6 to 8,000 years ago. There are pharaonic materials; this area had a trading relationship with the pharaohs in Egypt. There are amphorae from the Mediterranean world. This really was the crossroads of the world for quite some time.”

This area of the installation, the part that’s richest in artifacts, is characterized by two watercourses merging into a third larger one, “something like a mini-Pittsburgh,” Larson says. During the millennia that the area was savanna, the wadis had more water and made Little Pittsburgh prime real estate for human and hominid alike.

In the absence of fossils or other dateable matrix associated with the tools, Norman and other archaeologists have to rely on the style of manufacture to assign a tentative age to each piece, much as an appraiser does when confronted by an unprovenanced attic find on the Antiques Road Show.

“If you pull a pair of jeans from a drawer, and they have bell bottoms and a high waist, you start thinking about the Seventies,” he explained.

Norman explained that the tools were made on the spot, as needed. Over the millennia, tools show advancements in quality. Tool manufacture is a learned skill and archaeologists believe these choppers and hand axes are tangible evidence of the first glimmerings of a culture.

The hominids that made and used these tools were not thinking about culture. Norman says the tools gave our remote ancestors distinct advantages over their non-primate competitors in the nasty, brutish and short existence that was daily life eons ago. He picked up one of the choppers again to demonstrate.

“One of the parts of the animal that we can exploit—and that most others couldn’t—is the marrow, what’s inside the long bones,” he said. “It’s difficult, even for lions.”

Norman is holding the tools in trust for the government of Djibouti. The artifacts will be returned to Djibouti, but first Norman will run some tests, notably microscopic examination of the wear pattern on the edges.

Such laboratory tests can provide insights on what the tools were used on, but are of little use in identifying the species of prehuman that used them. Not all species in the brushy evolutionary tree of hominids used tools. For instance, Norman notes that Lucy was probably not a tool user; her species, Australopithecus afarensis, predates the Oldowan-era tool-using hominids.

“Once you get into the Homo line, you are talking about people—well, individuals, let’s say—who are physically and genetically much closer to us than are australopithecenes,” he said.

Norman added that the appearance of Homo habilis—the hominid who knew how to make tools—is widely regarded as one of the real watershed moments in human evolution as well as stone tool use.

“Quite possibly, those are the individuals who made these tools,” he said. “There’s some debate about that.”

Larson says he isn’t ready to identify the tools with Homo habilis, offering a few other hominid species as alternative candidates. He also offers a migration theory, an explanation of how the tools—and the toolmakers—came to Little Pittsburgh near the military installation.

He said he believes the tool-makers were part of a group that made their way from the savannas of interior Africa along arms of the Great Rift Valley, cracks in the earth created by recent geologic forces leading out of what is now Tanzania, Ethiopia and Kenya.

“These early hominids are coming right along these landforms,” Larson explained. They’re going into these fissures, cracks and whatnot that are created through volcanism and tectonics as the Horn of Africa is cracking apart. They’re following it all the way out, They’re just following food.”

A long, slow journey to the gulf

The food, he said, was associated with the rivers, which led the migrant hominids on a long, slow journey through Little Pittsburgh and eventually to a bay on the Gulf of Aden where they could regale upon shellfish at low tide. Their trail follows the watercourses, now often-dry wadis, and is marked in places by the tools they made as needed, then dropped.

Little Pittsburgh was popular real estate for a long time, as made evident by the timeline of artifacts found on the scene. Norman says they found the remains of a stone-age workshop that probably dates to 30- to 40,000 years ago, in the early days of behavioral modernity among modern humans.

“Someone had sat cross-legged near a hearth and made a stone tool,” he said. “And all the flakes from that tool were right there. It is really humbling to be surrounded by the residue of intelligent life, material that vastly predates the oldest artifacts in North America.”
Neil Norman is an associate professor of anthropology at William & Mary. Bruce Larson, a 2003 M.A. graduate of the department, is an anthropologist working with the U.S. Naval Facilities Engineering Command.