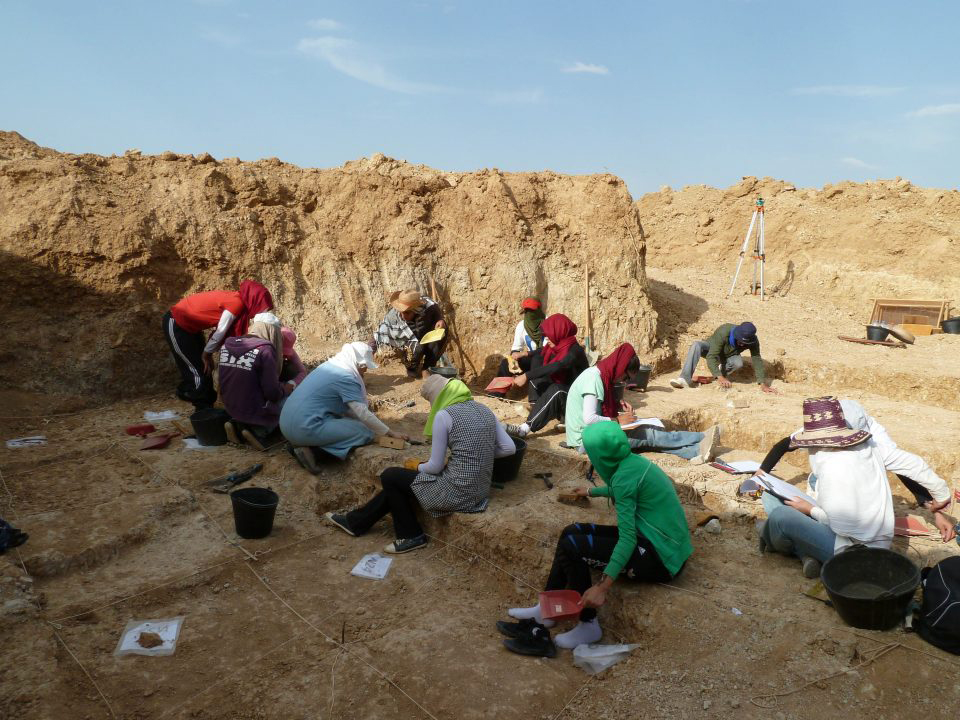 The whole of Africa was the cradle of Humankind

Research based on the archaeological remains at sites of Ain Hanech

A team of scientists led by Mohamed Sahnouni, archaeologist at the Centro Nacional de Investigación sobre la Evolución Humana (CENIEH), has just published a paper which breaks with the paradigm that the cradle of Humankind lies in East Africa, based on the archaeological remains found at sites in the region of Ain Hanech (Algeria), the oldest currently known in the north of Africa.

For a long time, East Africa has been considered the place of origin of the earliest hominins and lithic technology, because up to now, very little was known about the first hominin occupation and activities in the north of the continent. Two decades of field and laboratory research directed by Dr. Sahnouni have shown that ancestral hominins actually made stone tools in North Africa that are near contemporary with the earliest known stone tools in East Africa dated to 2.6 million years.

These are stone artefacts and animal bones bearing marks of cutting by stone tools, with an estimated chronology of 2.4 and 1.9 million years, respectively, found at two levels at the sites of Ain Boucherit (within the Ain Hanech study area), which were dated using Paleomagnetism, Electron Spin Resonance (ESR), and the Biochronology of large mammals excavated together with the archaeological materials.

Fossils of animals such as pigs, horses and elephants, from very ancient sites, have been used by the paleontologist Jan van der Made, of the Museo Nacional de Ciencias Naturales in Madrid, to corroborate the ages yielded by Paleomagnetism, obtained by the CENIEH geochronologist Josep Parés, and ESR, found by Mathieu Duval, of Griffith University.

The artefacts of Ain Boucherit were manufactured of locally available limestone and flint and include faces worked into choppers, polyhedra and subspheroids, as well as sharp-edged cutting tools used to process animal carcasses. These artefacts are typical of the Oldowan stone technology known from 2.6-1.9 million-year-old sites in East Africa, although those from Ain Boucherit show subtle variations.

“The lithic industry of Ain Boucherit, which is technologically similar to that of Gona and Olduvai, shows that our ancestors ventured into all corners of Africa, not just East Africa. The evidence from Algeria changes the earlier view that East Africa was the cradle of Humankind. Actually, the whole of Africa was the cradle of humankind”, states Sahnouni, leader of the Ain Hanech project.

Ain Boucherit is one of the few archaeological sites in Africa which has provided evidence of bones with associated marks of cutting and percussion in situ with stone tools, which shows unmistakably that these ancestral hominins exploited meat and marrow from animals of all sizes and skeletal parts, which implied skinning, evisceration and defleshing of upper and intermediate extremities.

Isabel Cáceres, taphonomist at the IPHES, has commented that “the effective use of sharp-edged tools at Ain Boucherit suggests that our ancestors were not mere scavengers. It is not clear at this moment whether they hunted, but the evidence clearly shows that they were successfully competing with carnivores and enjoyed first access to animal carcasses”.

At this moment, the most important question is who made the stone tools discovered in Algeria. Hominin remains have still not been found in North Africa which are contemporary with the earliest stone artefacts. As a matter of fact, nor have any hominins yet been documented in direct association with the first stone tools known from East Africa.

Nevertheless, a recent discovery in Ethiopia has shown the presence of early Homo dated to 2.8 million years, most likely the best candidate also for the materials from East and North Africa.

Scientists thought for a long time that the hominins and their material culture originated in the Great Rift Valley in East Africa. Surprisingly, the earliest known hominin, dated to 7.0 million years, and the 3.3 million years Australopithecus bahrelghazali, have been discovered in Chad, in the Sahara, 3000 km from the rift valleys in the east of Africa.

As Sileshi Semaw, scientist at the CENIEH and a co-author of this paper, explains that the hominins contemporary with Lucy (3.2 million years), were probably roamed over the Sahara, and their descendants might have been responsible for leaving these archaeological puzzles now discovered in Algeria, that are near contemporaries of those of East Africa.

“Future research will focus on searching for human fossils in the nearby Miocene and Plio-Pleistocene deposits, looking for the tool-makers and even older stone tools”, concludes Sahnouni.