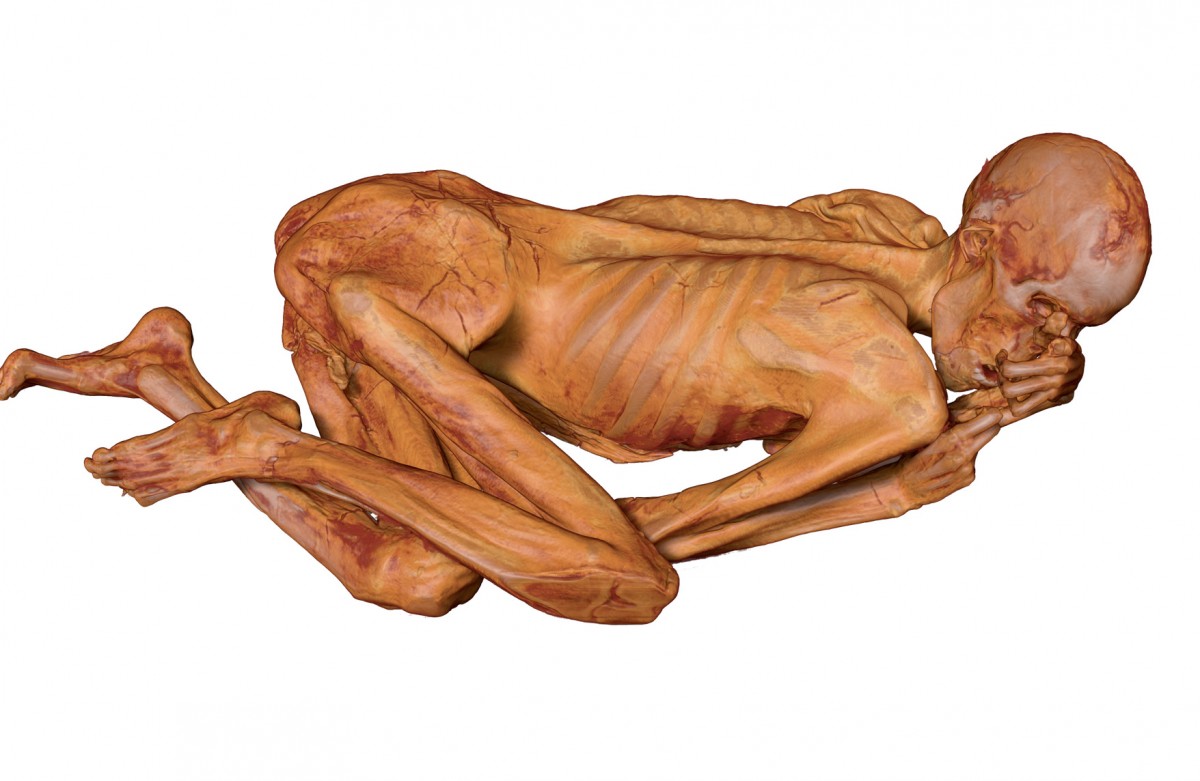 Using visualisation technology developed at Linköping University under the auspices of Visualization Center C, visitors to the British Museum can reveal the murder of the mummified Gebelein Man, 5,500 years ago. This world-leading technology has been described in a prestigious journal of computer science, Communications of the ACM.

The Gebelein Man, who was mummified by natural processes, and the collaboration with the British Museum constitute the framework for the article, which focusses on the development of the technology used in the visualisation table, which has received a great deal of attention.

“It was challenging to obtain sufficiently high performance of the visualisation such that visitors can interact with the table in real-time, without experiencing delays. Further, the interaction must be both intuitive and informative,” says Anders Ynnerman.

Several thousand images of the mummy taken by computer tomography (CT) are stored in the table. In this case, 10,000 virtual slices through the complete mummy have been imaged, each one as thin as 0.3 mm. Rapid graphics processors can then create volumetric images, 3D images, in real-time to display what the visitors want to look at.

The degree of reflection and absorption of the X-rays by the mummy is recorded by the CT scanner and converted with the aid of a specially developed transfer function to different colours and degrees of transparency. Bone, for example, gives a signal that is converted to a light grey colour while soft tissue and metal objects give completely different signals that are represented by other colours or structures

“The table displays 60 images per second, which our brain interprets as continuous motion. Sixty times each second, virtual beams, one for each pixel on the screen, are projected through the dataset and a colour contribution for each is determined. We use the latest type of graphics processor, the type that is used in gaming computers,” says Patric Ljung, senior lecturer in immersive visualisation at Linköping University.

This makes it possible for visitors to interact with the table. The desiccated skin of the mummy can be peeled away in the image and only the parts that consist of bone displayed. When this is done, it becomes clear that the Gebelein Man was killed by a stab through the shoulder.

The principles that have determined the design of the table are also described in the article. The design arose in close collaboration between the personnel at the museum and Interactive Institute Swedish ICT, working within the framework of Visualization Center C in Norrköping.

The design is minimalist and intuitive. The display table must be rapid, and no delay in the image can be tolerated. It must be able to withstand use by the six million visitors to the museum each year, and much emphasis has been placed on creating brief narrative texts with the aid of information points. Simple and self-explanatory icons have been used, and several favourable viewpoints and parameters have been preprogrammed in order to increase the table’s robustness.

“Allowing a broader public to visualise scientific phenomena and results makes it possible for them to act as researchers themselves. We allow visitors to investigate the same data that the researchers have used. This creates incredible possibilities for new ways to communicate knowledge, to stimulate interest, and to engage others. It’s an awesome experience – watching the next generation of young researchers be inspired by our technology,” says Anders Ynnerman.