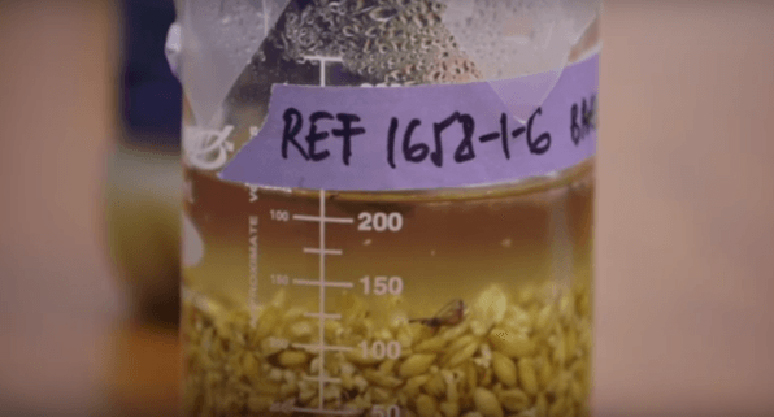 On a recent afternoon, a small group of students gathered around a large table in one of the rooms at the Stanford Archaeology Center.

A collection of plastic-covered glass beakers and water bottles filled with yellow, foamy liquid stood in front of them on the table, at the end of which sat Li Liu, a professor in Chinese archaeology at Stanford.

White mold-like layers floated on top of the liquids. As the students removed the plastic covers, they crinkled their noses at the smell and sour taste of the odd-looking concoctions, which were the results of their final project for Liu’s course Archaeology of Food: Production, Consumption and Ritual.

The mixtures were homemade beer students made using ancient brewing techniques of early human civilizations. One of the experiments imitated a 5,000-year-old beer recipe Liu and her team revealed as part of published research last spring.

“Archaeology is not just about reading books and analyzing artifacts,” said Liu, the Sir Robert Ho Tung Professor in Chinese Archaeology. “Trying to imitate ancient behavior and make things with the ancient method helps students really put themselves into the past and understand why people did what they did.”

Liu, together with doctoral candidate Jiajing Wang and a group of other experts, discovered the 5,000-year-old beer recipe by studying the residue on the inner walls of pottery vessels found in an excavated site in northeast China. The research, which was published in Proceedings of the National Academy of Sciences, provided the earliest evidence of beer production in China so far.

The ancient Chinese made beer mainly with cereal grains, including millet and barley, as well as with Job’s tears, a type of grass in Asia, according to the research. Traces of yam and lily root parts also appeared in the concoction.

Liu said she was particularly surprised to find barley – which is used to make beer today – in the recipe because the earliest evidence to date of barley seeds in China dates to 4,000 years ago. This suggests why barley, which was first domesticated in western Asia, spread to China.

“Our results suggest the purpose of barley’s introduction in China could have been related to making alcohol rather than as a staple food,” Liu said.

The ancient Chinese beer looked more like porridge and likely tasted sweeter and fruitier than the clear, bitter beers of today. The ingredients used for fermentation were not filtered out, and straws were commonly used for drinking, Liu said.

At the end of Liu’s class, each student tried to imitate the ancient Chinese beer using either wheat, millet or barley seeds.

The students first covered their grain with water and let it sprout, in a process called malting. After the grain sprouted, the students crushed the seeds and put them in water again. The container with the mixture was then placed in the oven and heated to 65 degrees Celsius (149 F) for an hour, in a process called mashing. Afterward, the students sealed the container with plastic and let it stand at room temperature for about a week to ferment.

Alongside that experiment, the students tried to replicate making beer with a vegetable root called manioc. That type of beer-making, which is indigenous to many cultures in South America where the brew is referred to as “chicha,” involves chewing and spitting manioc, then boiling and fermenting the mixture.

Madeleine Ota, an undergraduate student who took Liu’s course, said she knew nothing about the process of making beer before taking the class and was skeptical that her experiments would work. The mastication part of the experiment was especially foreign to her, she said.

“It was a strange process,” Ota said. “People looked at me weird when they saw the ‘spit beer’ I was making for class. I remember thinking, ‘How could this possibly turn into something alcoholic?’ But it was really rewarding to see that both experiments actually yielded results.”

Ota used red wheat for brewing her ancient Chinese beer. Despite the mold, the mixture had a pleasant fruity smell and a citrus taste, similar to a cider, Ota said. Her manioc beer, however, smelled like funky cheese, and Ota had no desire to check how it tasted.

The results of the students’ experiments are going to be used in further research on ancient alcohol-making that Liu and Wang are working on.

“The beer that students made and analyzed will be incorporated into our final research findings,” Wang said. “In that way, the class gives students an opportunity to not only experience what the daily work of some archaeologists looks like but also contribute to our ongoing research.”

Getting a glimpse of the ancient world

For decades, archeologists have yearned to understand the origin of agriculture and what actions may have sparked humans to transition from hunting and gathering to settling and farming, a period historians call the Neolithic Revolution.

Studying the evolution of alcohol and food production provides a window into understanding ancient human behavior, said Liu, who has been teaching Archaeology of Food for several years after coming to Stanford in 2010.

But it can be difficult to figure out precisely how the ancient people made alcohol and food from just examining artifacts because organic molecules easily break down with time. That’s why experiential archaeology is so important, Liu said.

“We are still trying to understand what kind of things were used back then,” Liu said.

Ota, a junior who is double majoring in archaeology and classics, and other students praised Liu’s class for giving them an important hands-on view into the ancient world.

“Food plays such an important role in who we are and how we’ve developed as a species,” Ota said. “We can use the information that we gain in these experiments to apply to the archaeological record from thousands of years ago and ask questions about what these processes reflect and what we can say about alcohol fermentation and production.”