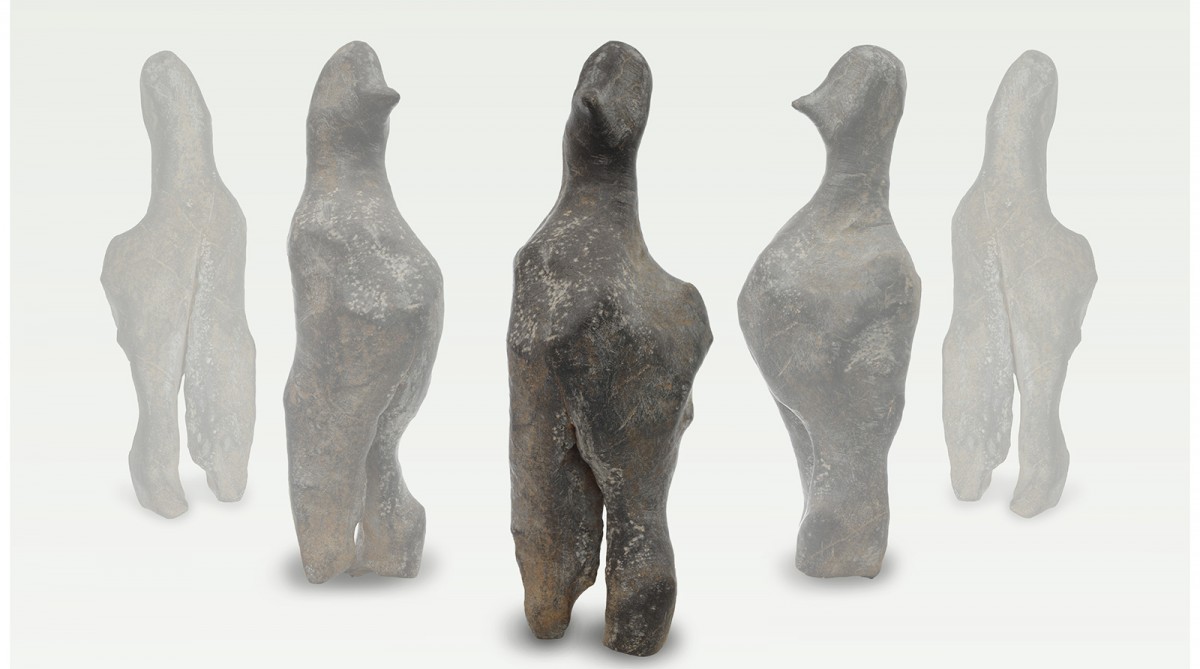 A human figure carved in stone 7000 years ago

The Unseen Museum: Glimpses into the world of the storerooms

In the National Archaeological Museum with its magnificent monumental sculptures of historic times, the smaller than life-size statuette of the human figure (36 cm in height) can hardly measure up to them. Nevertheless, it clearly sums up the effort of the sculptor of the Final Neolithic period (4500-3300 BC) to carve in the round this rare work, out of such a hard rock as granite, without having at his disposal metal tools.

Stone figurines, as a rule, are scarce, usually of small size and made of soft rocks. Furthermore, only a small percentage (5%) of Neolithic figurines falls into the category of largesized ones, namely over 35 cm in height. The bird-like figurine has a markedly rounded belly, while its back is flat. The legs, rendered as cylinders, are abruptly cut off, hampering the figure to stand stable. The dark grey surface is the end result of polishing, as indicated by the unworked facets of the pubic area, which display the original lighter colour of the stone.

Morphoplastic limitations, imposed by the raw material, are apparent in the asymmetric volume rendering of the belly. We are not in a position to know whether the lack of clear indication of sex is due to these limitations or whether it was the intention of the sculptor to create an asexual figure. On one hand, the protruding belly could mark the state of pregnancy, but where are the breasts? The ‘asexual’, in this case, could indeed reflect avoidance of visual sex distinction, namely, it could be connected to gender and its role in the Neolithic society. Female, male, asexual, bird-like, naturalistic, schematic, large or small ones, all figurines participate into a ritual ‘company’ embedded in the perceptions of the Neolithic culture, so much different than those of our own world!

Every two months the National Archaeological Museum of Athens selects an artefact from its storerooms to present to the public.

Beneath the bustling with life halls of the National Archaeological Museum of Athens an altogether different world is hidden. Statues, gold jewelry, valuable bronze vessels, as well as personal everyday objects patiently await the moment to become the centre of attention.Antiquities selected from the unknown world of the storerooms, one after the other emerge every two months from their secure state of obscurity into the light, inviting the fans of rare memorable moments to capture their stories and narratives.