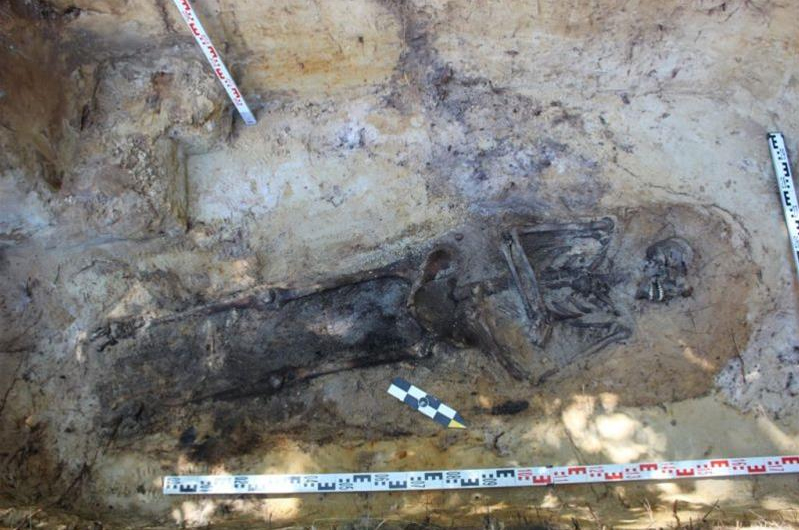 The skeleton that “spoke”

Cooperation of archaeologists and ethnologists

Archaeologists who excavated the bones say that the deceased was a young, well-kept man, shot in the head. His feet were bitten by wild animals. There were no objects or pieces of clothing near the remains. A mob hit perhaps?

If archaeologists were not working in the field together with ethnologists, they could have drawn this conclusion. However, in this case, the scientists of the two specialties cooperated on a scale hitherto unprecedented in Poland.

“We were looking for places related to the cultural heritage of the local communities, but ones that we refer to as ‘less obvious’. Not the well known castles or monuments, but places important only for part of the village community, a few families. The locations, the story of which has not yet reached any historian”, says Dr. Olgierd Ławrynowicz from the Institute of Archaeology, University of Lodz, leader of the project “Places of remembrance and oblivion. Interdisciplinary research in the northern part of the Kraków-Częstochowa Upland”.

It soon turned out that many of the selected sites were related to the times of armed conflicts – the world wars and the period of national uprisings.

First, historians and art historians conducted an intensive query on the selected area, covering five communes: Mstów, Olsztyn, Janow, Przyrów and Lelów. Then, ethnologists from the University of Lodz started field research. They studied the most important monuments of the communes beforehand so as not to focus on them during conversations with the locals.

“We wanted to reach the stories that scientists have not yet heard”, added Dr. Ławrynowicz.

To learn things from the inhabitants of an area, archaeologists and historians sometimes use a survey, which is not the ideal tool for obtaining information. The acquisition of knowledge from “the spoken sources” (i.e., from people) is more effective in the approach of ethnologists, as Ławrynowicz noted.

He decided to use their methods during the project. According to Ławrynowicz, ethnologists would sometimes spend even a few hours talking to one person. “Direct meeting was the best way to win trust and obtain the information of interest to us. In addition, memory not always can be accessed quickly. It must be stimulated with a conversation”, noted the researcher.

The generation of people who remember the times of World War II is dying. But according to Dr. Ławrynowicz people in middle age, who listened to the stories of their parents or grandparents, were often very good informants about that period in the study area.

People of all ages spoke about the enigmatic grave near Konstantynów in the commune of Lelów. As a result, the researchers obtained almost complete picture of the drama that played out 72 years ago. From the fragments of information they were able to reconstruct the last days and moments of the deceased:

The end of World War II was near. Germans were evacuating from the east, running from the Soviet army. Among them was a young German veterinarian, who passed through the Kraków-Częstochowa Upland. His truck driver was Czech. The Soviets came to the area earlier than the two men expected. They had to hide. But the refugees were found on one of the farms. Soldiers released the Czech, but captured the German and decided to execute him. He begged for mercy – he said that he was not a soldier, he only treated animals, and his wife and children were waiting for him at home. Local people also spoke for the arrestee.

“According to the residents’ accounts, the vet fainted when the Soviets were leading him to be shot. The fainted man was shot in the head”, said Dr. Ławrynowicz. The execution made a huge impression on the witnesses – also because of its brutal and chaotic course. Residents even mentioned that blood spurted on the windows of a house.

The Soviets threw the body into a ditch, where it lay for several days. According to the stories, one of the villagers stripped the German and walked around in his clothes. This caused outrage – the village headman ordered the person who desecrated the body to bury it. But a few days had passed from the moment of death, and wild animals found the body, which explains the bite marks on the feet.

“We would have never discover this dramatic story and the fate of the man buried on the edge of the forest by using only archaeological methods. Archaeology of modernity requires the cooperation of representatives of various disciplines”, said Dr. Ławrynowicz.

The story of the German veterinarian was just one of the elements of the history that the researchers reconstruct in the Kraków-Częstochowa Upland. As part of the project, in each of the surveyed communes they selected dozens of places for studies and documented (in the form of drawings, photos or marking GPS coordinates) various historic objects, such as chapels. Archaeologists also conducted excavations – an average of two-three digs in each commune. This was the case with the place indicated by the residents of Konstantynów. Now, the remains will be buried in a German soldiers cemetery.

“The goal of our research is not only to discover the unknown episodes of the contemporary history of the Kraków-Częstochowa Upland, but also to protect cultural heritage. The best way to do this is to broaden the knowledge of the local history among the local communities”, said Dr. Ławrynowicz.

There are many similar stories in neighbouring communes. People said, for example, that near Mt. Skarzawa in the commune of Mstów, near an old cross, the Germans had hidden treasure during World War I, or that a fighter in January Uprising was buried there (accounts varied). Meanwhile, excavations revealed that the earth hid the remains of a soldier from the First World War.

“In a way, the stories were complementary – after all it was a soldier (admittedly not an insurgent) and he died in World War I (treasure was believed to originate from that period). Human memory is unreliable, but you can see that it is sometimes close to the historical facts”, noted Dr. Ławrynowicz.

Through research in the Kraków-Częstochowa Upland, scientists discover hitherto unknown cards from contemporary history and develop interdisciplinary research methods. In turn, the residents participating in the popularisation activities organized within the framework of the project (in the form of lectures, exhibitions, workshops for children and youth) deepen their knowledge of the local cultural heritage. Students drew conclusions from the interdisciplinary collaboration – in May they will organize a joint conference on the cooperation of archaeologists and ethnologists in the field of research – said Dr. Ławrynowicz.