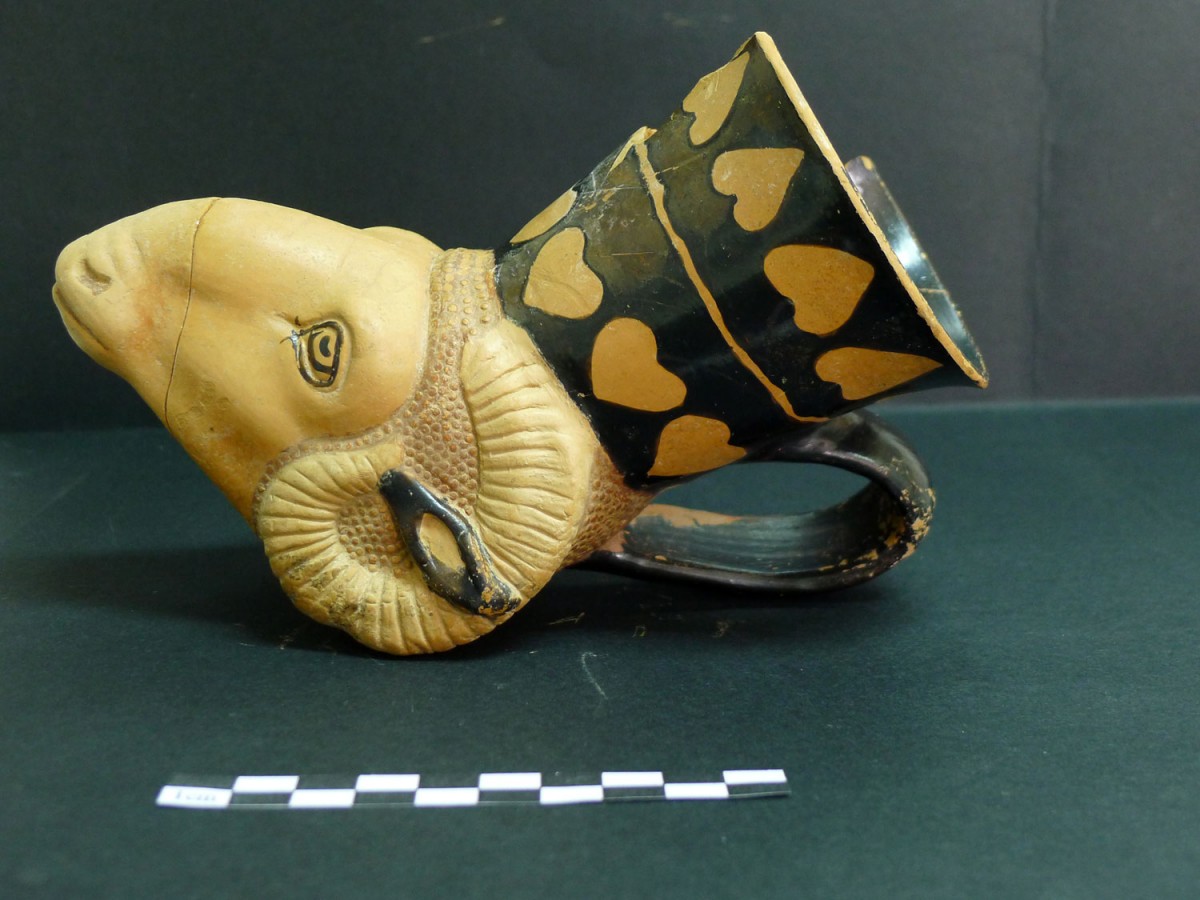 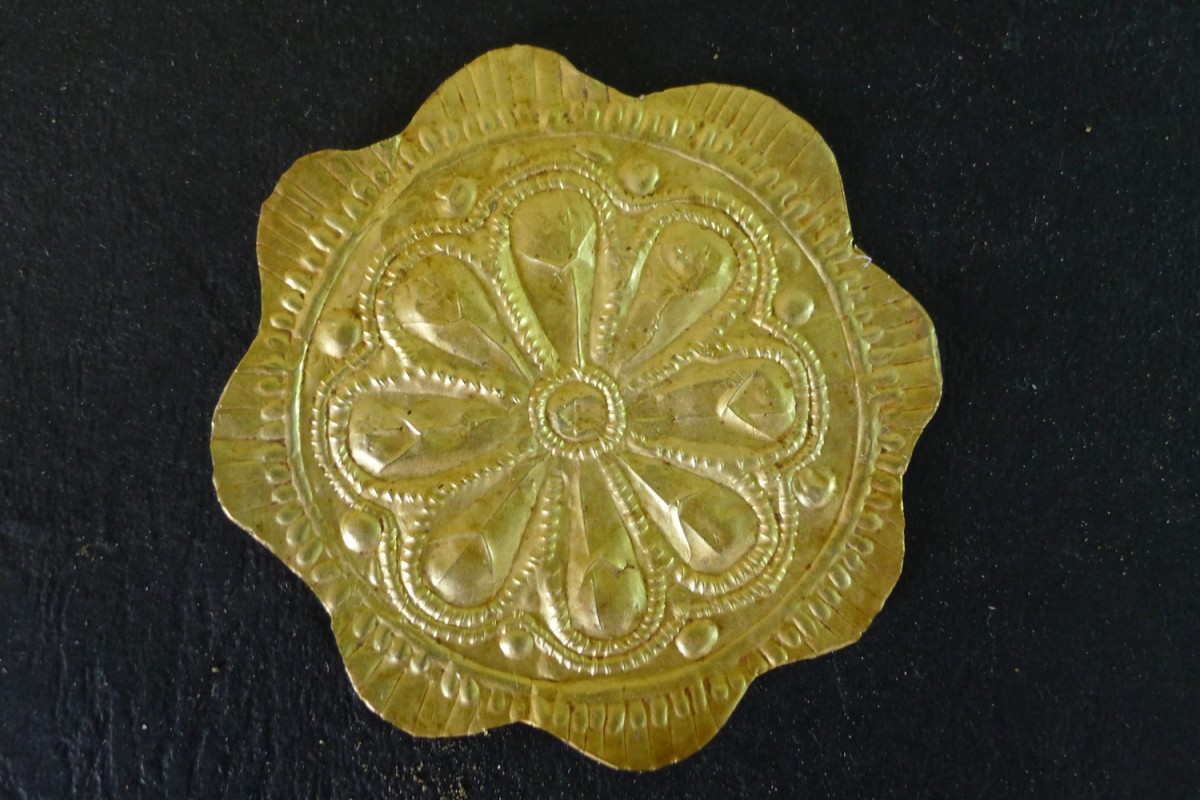 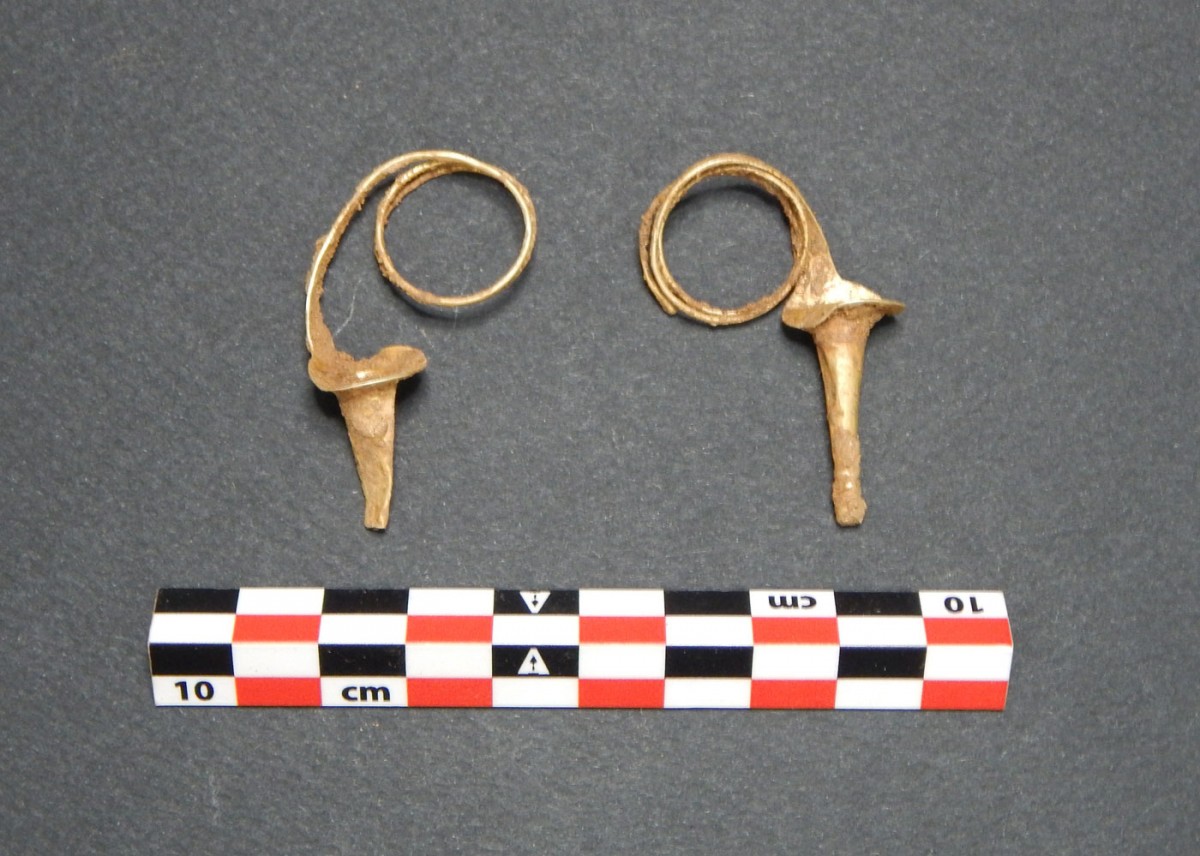 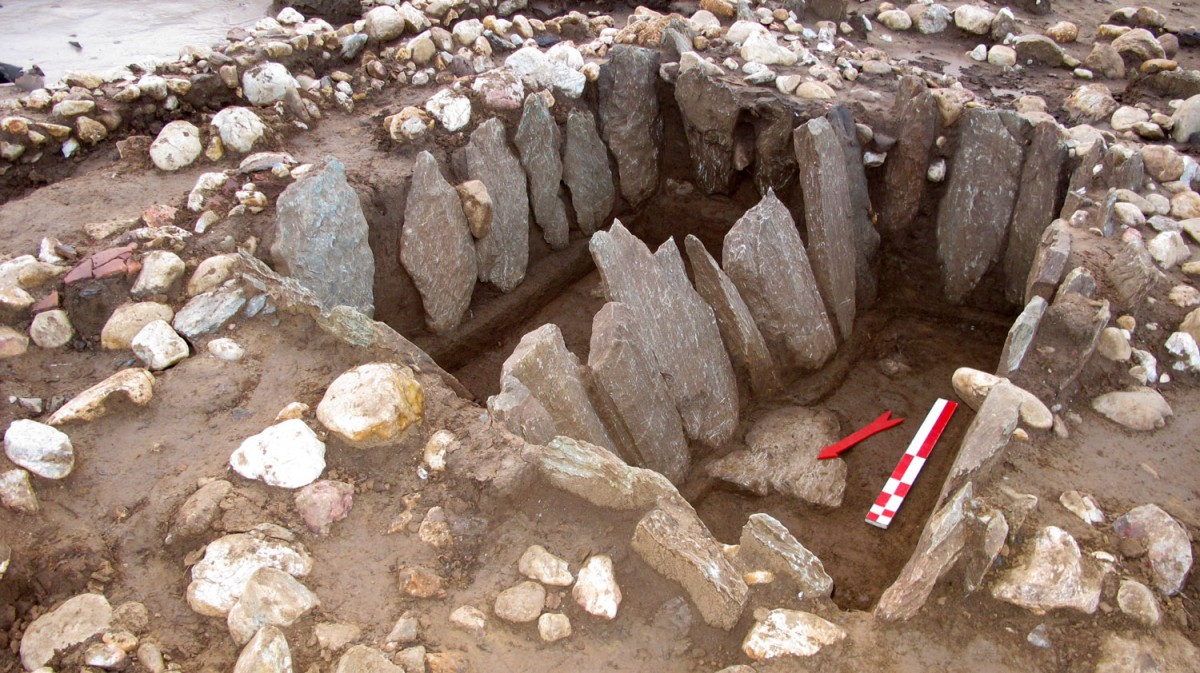 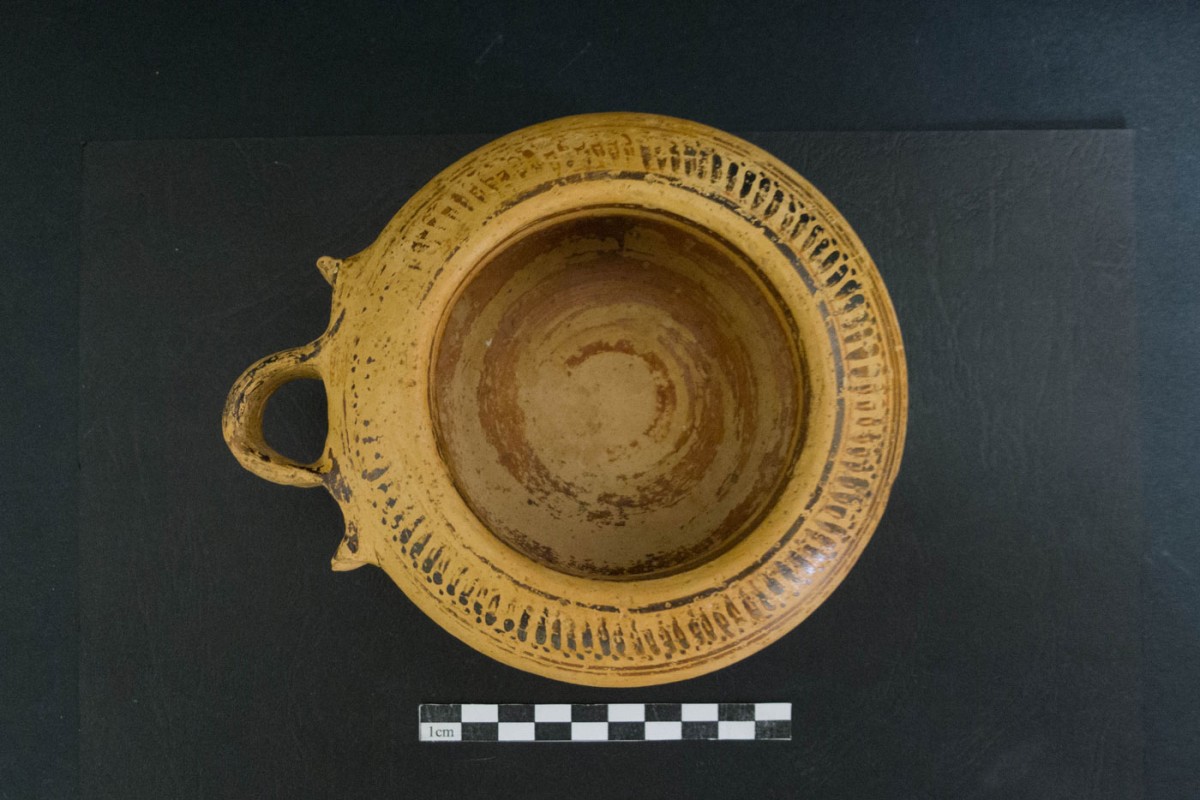 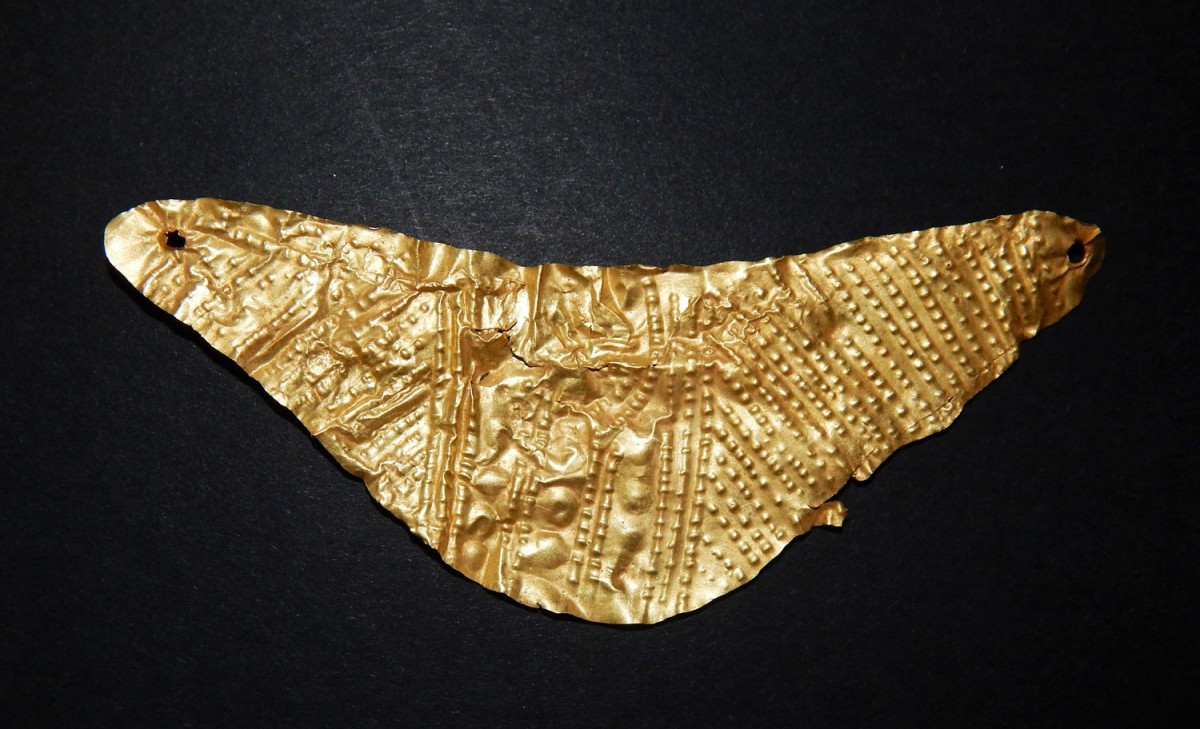 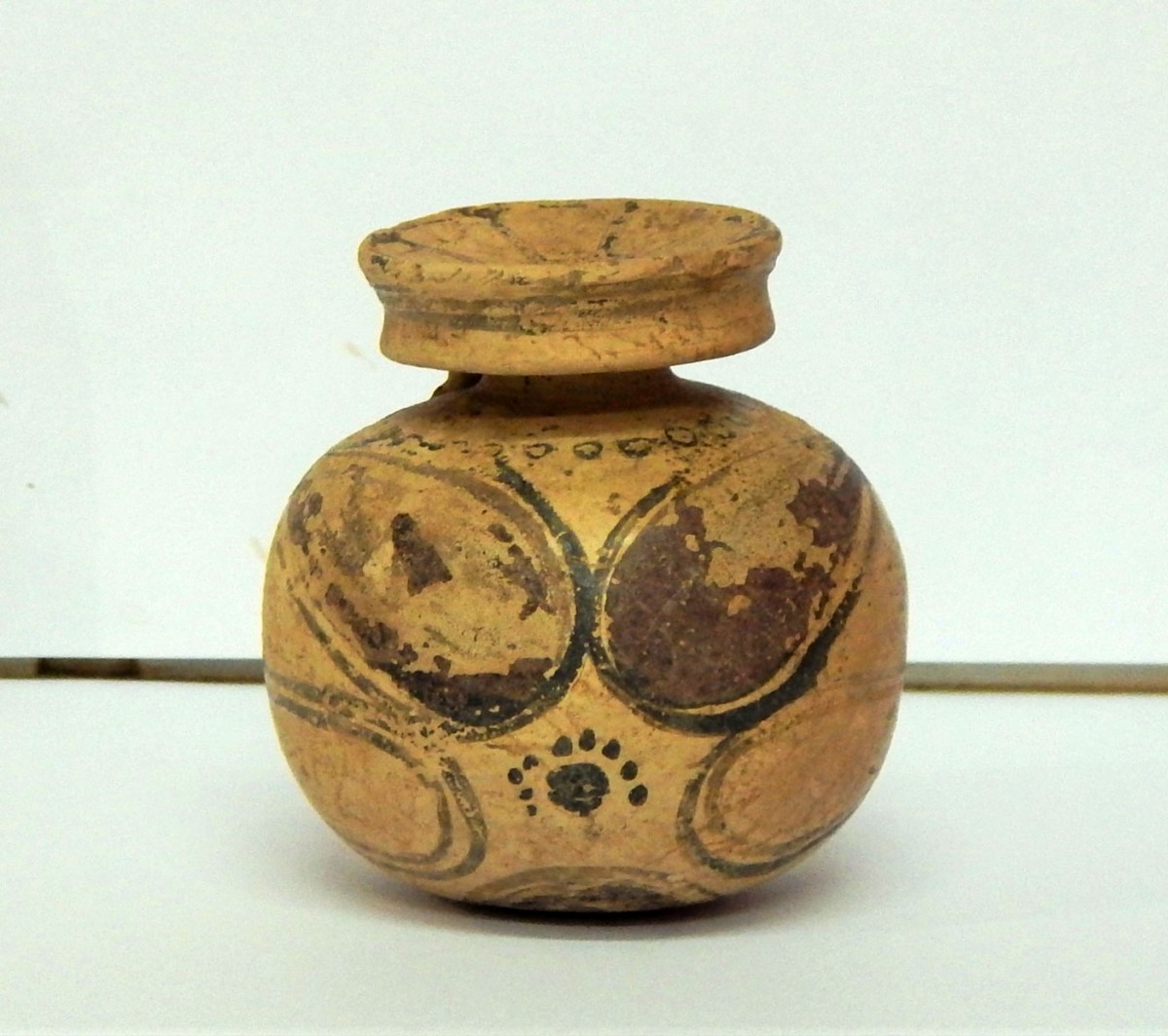 Previous Next
View all photos
Photo caption
News: Ephorate of Antiquities of Florina

A very interesting paper about the “Cemetery of Archaic and Classical times of Achlada in Florina” was presented by archaeologist Liana Gelou (Ephorate of Antiquities of Florina) during the 30th meeting of the Archaeological Work in Macedonia and Thrace, which was organized by the Aristotle University of Thessaloniki and the Ministry of Culture. In her paper Mrs. Gelou referred to the finds of the excavations at the site.

Since 2010, the Ephorate of Antiquities of Florina has been supervising the excavations for the mining of lignite at the mine of Achlada. The research has been funded by the Lignit Mines of Achlada.

In December 2014, underneath building remains dating back to the Roman period, an organized cemetery was located. The finds were impressive and shed light on hitherto unknown aspects of the civilization developed in Lynkestis during the Archaic and Classical times.

Researchers had long ago pointed out the existence of an ancient settlement and burials on the left bank of Geropotamos, as the Ephorate of Antiquities of Florina informs us. The site was known to the archaeological service as a cemetery of Roman years – a conclusion based on the human skeletal remains in the basin of a stream, and on the inscribed grave stelai of the 2nd and 3rd c. AD which were found in the area and are now exhibited in the Archaeological Museum of Florina. In ancient Greek literature we find very few references to ancient Lynkestis. In addition to that, up to now there were no archaeological finds to fill in the gaps of our knowledge about the area – in particular, during the period prior to the unification of the Macedonian state by Philip II. Until recently, due to this lack of data, it was assumed that the area had been socially and culturally isolated.

We know from ancient Greek written sources that Macedonia was divided in Upper (mountainous) and Lower (plain) Macedonia. The modern regional units of Kastoria, Florina, Kozani and Grevena belonged to Upper Macedonia. Within the geographical boundaries of these regions the following tribes were living: Orestae, Lynkestai, Eordoi, Tymphaioi and Elimiotes. Upper Macedonia comprised kingdoms of related racial groups – races which had an organized social and political system. Macedonian society remained based on the aristocratic structure of the gene connected through royal power, and preserved its racial organization throughout  its history, even after the inclusion of the local kingdoms in the state of Aigai, in 358 BC, by Philip II. According to Strabo, the Lynkestai come from the tribe of Bacchiads, which were expelled from Corinth in mid-7th c. BC. The first known king of Lynkestis, in mid-5th c. BC, was the son of Bromeros, Arrhabaios I, the granddaughter of which is considered to be Euridice, mother of Philip II. This tradition has been preserved in myths and shows the relationship of Upper Macedonia inhabitants with the Northeastern Pelopponese and the descent of the royal houses (The royal house of the Temenides of Aigai, the Bacchiads of Lynkestis) from Hercules and Argos or Corinth respectively.

The excavations in Achlada are still in progress and the burials found until now are more than 170. In most of these, the skeletal remains are in a bad state of preservation. They date from the 6th to the 4th c. BC, while the burial customs present similarities with other cemeteries of the same period in Macedonia, like the ones in Sindos, Aigai, the Archontikon  of Pella and Aiani. According to the burial customs of Macedonians, the deceased is buried with his/her personal items, like jewelry, which are status symbols, as well as with objects used in burial rituals and refer to beliefs about the after-life.

Men were buried with their weapons, reflecting the ideal of the warrior, and women were buried with their jewelry. Warriors are accompanied by one or two spears or javelins, iron swords and knives, weapons implying real rivalry for dominion and the establishment of territorial possessions. Weapons, jewelry and golden foils characterize the gender and the social status of the deceased, while clay and bronze pottery, figurines and utensils are related to burial rituals and beliefs about the after-life. Golden mouth-pieces and eye covers with repousse and dotted decoration, golden rosettes and discs for the decoration of clothing, gold and silver-plated earrings were also found. The mouth-pieces, the eye covers and the rest of the foils are possibly related with the widespread belief that gold has a protective power. Due to its imperishable nature, gold has been linked from early on with the ideas of immortality and eternity.

Furthermore, an abundance of bronze jewelry has been found. These include fibulae and pins, rings (simple or with depictions on the bezel), earrings and bracelets (simple or spiral ones).

The clay or bronze vases are usually placed near the feet. In early burials, clay pots come mainly from local workshops and feature shapes which have a long tradition in the North Helladic region during the Archaic and Classical period. The oldest (unitl now) imported clay vases were produced in the Corinthian pottery workshop. They were made for aromatic oils and ointments and date to the 6th and early 5th c. BC. By examining the Achlada pottery it can be concluded that the majority of the craftsmen were indigenous and had been influenced from big artistic centres, like that of Ionia, Corinth and Athens, areas with which the Macedonians had close trade relations. The local craftsmen adopted common types and motifs, the rendering of which depended on the extent to which the artistic trends had been assimilated and the local special characteristics and traditions. There were also foreign craftsmen, goldsmiths, potters, coropolasts, armorers etc. working in Macedonia during the Archaic times.

The burials of the 4th c. BC are accompanied by numerous Attic vases, with shapes which were very popular in cemeteries of the same period throughout the Helladic space. Of special interest is a black-glazed bucket (kados) with plastic decoration, with a relief head at the end of the handle and a sieve across the outflow hole. Also of interest is a vase in the form of a ram head with red-figured decorations and ivy leaves on its neck.

The finds of Achlada confirm the systematic commercial and cultural relations with important centres of south Greece and the colonies. These relations clearly influence the local production and show no differences to the cemeteries of the same period in the rest of the Macedonian territory.

Many answers were hidden in the soil of Achlada and the current research fills in the gaps of the written sources about the history of Macedonia and the national identity of Macedonians. Along with the finds of Aiani, the burial complex of Achlada enriches the archaeological map of the area, documents the historical knowledge and outlines the physiognomy of Hellenism of Upper Macedonia. The recent, unique in the area finds show vividly the unitary nature of Greek culture and prove that, parallel to the Macedonians of Lower Macedonia, the kingdoms of Upper Macedonia of the 6th and 5th c. BC are characterized by a robust economy, a high standard living and a high level of culture.