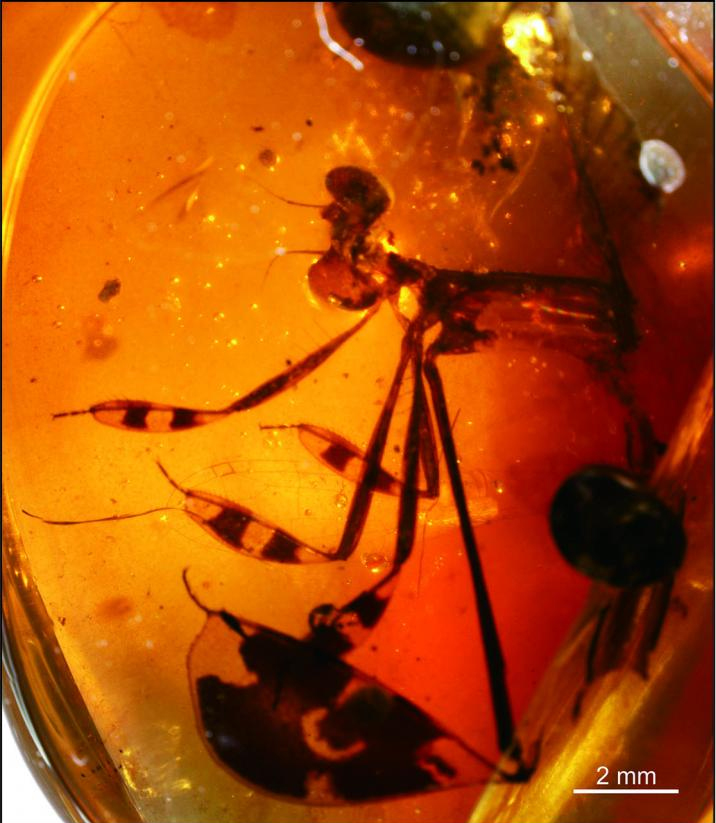 Courtship behaviours, frequent among modern insects, have left extremely rare fossil traces. In odonates, the male must persuade the female to mate in tandem and the female should be willing to engage her genitalia with the male’s.

Many territorial odonatans display their courtship by high-frequency wing-beats towards an approaching female. Most courtship, mating and parenting (social-sexual) behaviour cannot be preserved and fossil reports are few and ambiguous. No courtship behavious were previously recorded for fossil odonatans.

Y. huangi has spectacular extremely expanded, pod-like tibiae, helping to fend off other suitors as well as attract mating females, increasing the chances of successful mating. The new findings provide suggestive evidence of damselfly courtship behaviour as far back as the dinosaur age.

Modern Platycnemidinae and Chlorocyphidae convergently acquired similar but less developed structures. During courtship, male Platycypha caligata waves the white anterior surface of all six laterally enlarged tibiae at the females, but uses the posterior surface of the tibiae for intra-sexual signaling during territorial defense.

Similarly, male East Asian Platycnemis species with expanded, feather-like tibiae well differentiated from the females, exhibit a strong sexual dimorphism. The males display their white legs in a fluttering flight in front of females before mating. By morphological inference, the six extremely expanded tibiae of Y. huangi could also have a signaling function for courtship displays. Platycypha has all six tibiae expanded, but all less so than Y. huangi in size. Platycnemis has more expanded mid and hind tibiae, but is still smaller than Y. huangi. These more expanded fossil tibiae suggest an extreme adaptation for courtship behaviour.

The tibial shape of Y. huangi also resembles the wings of some members of the extinct neuropteran families. The tibiae of Y. huangi are hyaline and partly covered with two narrow brown bands, making them even more like pigmented wings. In addition, there is an eye-shaped spot in the middle of the hindleg, quite like the wing spots in Kalligrammatidae and some recent butterfly eyespots. These well-developed eyespots were and are used to make a conspicuous and contrasting display to intimidate vertebrate predators or protect the body by deflecting an attack to the wings.

Deflective eyespots in butterflies and fossil lacewings are smaller than deimatic ones and both are never on the legs, but dragonflies are predators with good eyesight, and the tiny ones in Y. huangi may have less to do with paralleling fossil lacewings in deflecting nearby predators and more to do with raising the interest of females (cf. peacock eyespots). That none of the pigmented tibiae in Y. huangi are damaged, however, suggests they did not precipitate an aggressive response.

This research was recently published in Scientific Reports, and supported by the National Natural Science Foundation of China, the Chinese Academy of Sciences, and the HKU Seed Funding Program for Basic Research.