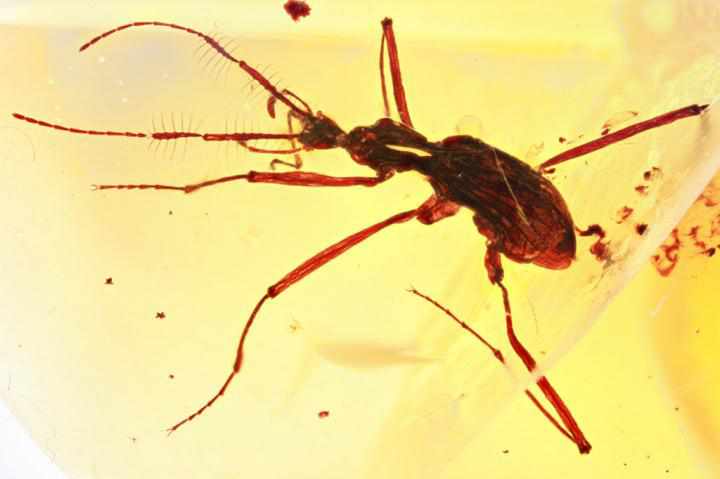 Specialized beetles shed light on predator-prey associations in the Cretaceous

Fossils from mid-Cretaceous Burmese amber, some 99 million years ago

Recently, a research team led by researchers from the Nanjing Institute of Geology and Palaeontology, Chinese Academy of Sciences (NIGPAS) found a new morphologically specialized beetle from the mid-Cretaceous Burmese amber, shedding new light on the predator-prey associations in the late Mesozoic terrestrial ecosystem.

These fossils, named as Cascomastigus monstrabilis YIN&CAI, 2017, are represented by both male and female, and belong to a small tribe called Mastigini. These early beetles display morphological modifications on the antennae unknown among living ant-like stone beetles and associated with predation on springtails (Collembola), a widespread and abundant group of significantly greater geological age.

Cascomastigus has an extremely large body size, elongate clubbed maxillary palpi, toothed mandibles, and more importantly, slender and highly modified antennae that functioned as an antennal setal trap. Such an antennal modification is analogous to that of the modern ground beetle genus Loricera (Carabidae, Loricerinae), a group possessing a specialized antennal setal trap exclusively for the capture of springtails.

Springtails, usually only a few millimeters long, are one of the most widespread and abundant of terrestrial arthropods, and is the most diverse group of Entognatha, the sister group to insects. The earliest known springtails, Rhyniella praecursor, are from the Early Devonian Rhynie chert (Scotland, approximately 400 million years ago), and Mesozoic and Cenozoic ambers have witnessed the explosive radiation of this usually overlooked group. Burmese amber also harbors abundant and diverse springtails, which sometimes occur in groups. Therefore, the springtails are potential ideal food resource for these litter-dwelling beetles.

The tribe Mastigini displays a disjunctive distribution, occurring in South Africa and southern Europe. The new discovery of Cascomastigus from northern Myanmar further highlights the once broader distribution of Mastigini. All previously known specialist predators of springtails are confined to the middle Eocene. Cascomastigus from about 99 million years ago represents the earliest known predators specialized for capturing springtails, pushing back the age of such predation by at least 54 million years.